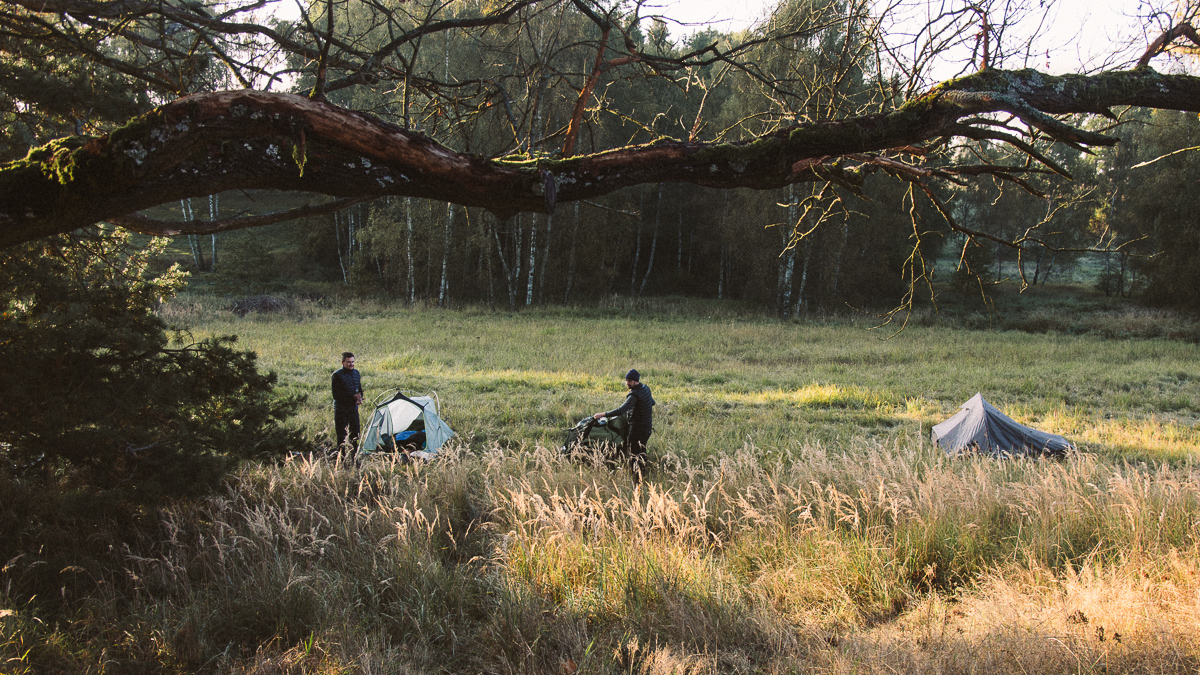 I always look forward to the autumn bikepacking reunion and I probably won't be far from the truth if I say that most of us do. Besides, autumn is one of the most visually dramatic times of the year. The sun has been describing a low path in the sky for most of the day and long shadows sculpt the outside world. Nature is tinged in autumnal hues tinged with the golden rays of the sun. It is a time of melancholy morning mists and sparkling frost.

I always look forward to the autumn bikepacking reunion and I probably won't be far from the truth if I say that most of us do. Besides, autumn is one of the most visually dramatic times of the year. The sun has been describing a low path in the sky for most of the day and long shadows sculpt the outside world. Nature is tinged in autumnal hues tinged with the golden rays of the sun. It is a time of melancholy morning mists and sparkling frost.

But planning a fall reunion so that the weather is ideal is a bit like divination from a crystal ball. When the weather is nice, you can count on relatively pleasant temperatures at night – or you can expect the complete opposite. Choosing the right gear is therefore also quite a nut to crack. Dag would probably have said something about that, too, but he didn’t come to this year’s meeting because he had a very rough trip to the Ore Mountains just a few days before the date, so all the planning was left to me. 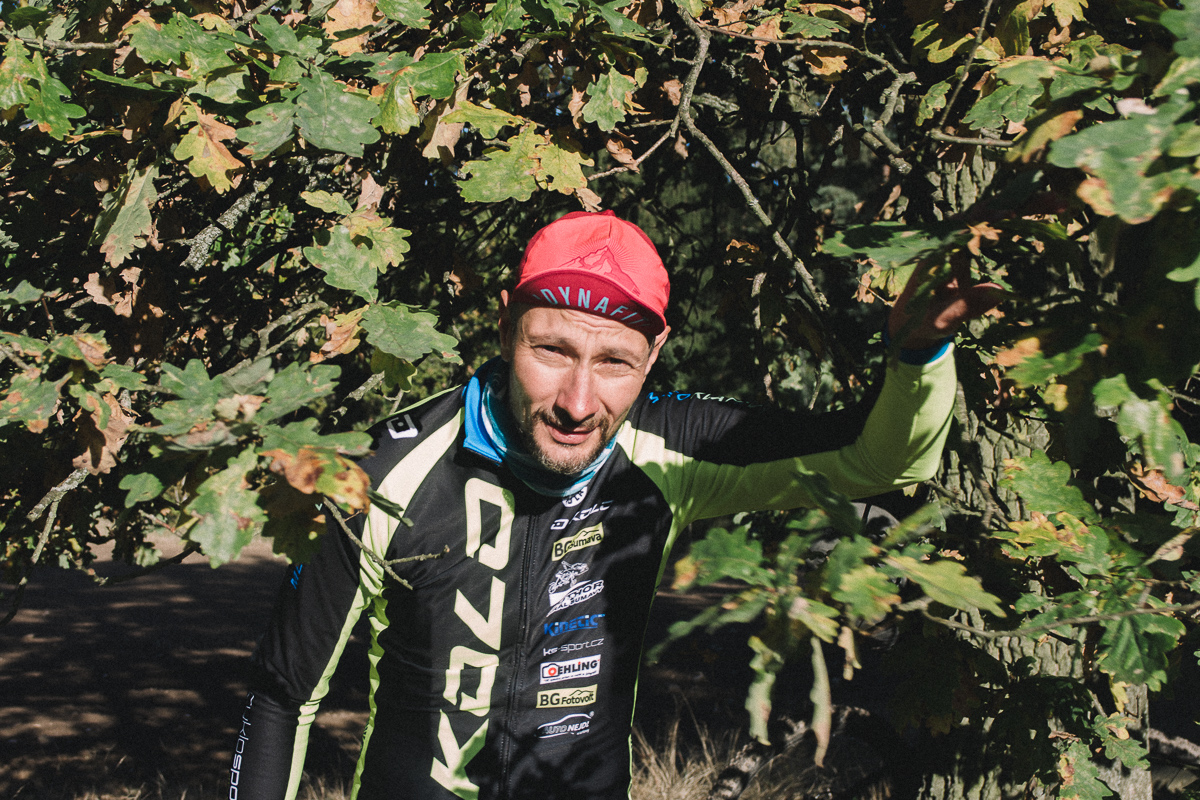 Fortunately, the choice of the place was made easier: I had discovered it a month earlier, when I “escaped” from a company team building with a few colleagues for a while to see more of the surrounding countryside. Back then I came across a small meadow with a chapel hidden behind a terrain wave in close proximity to the famous cycling trail called “In the footsteps of Emma Destin”. 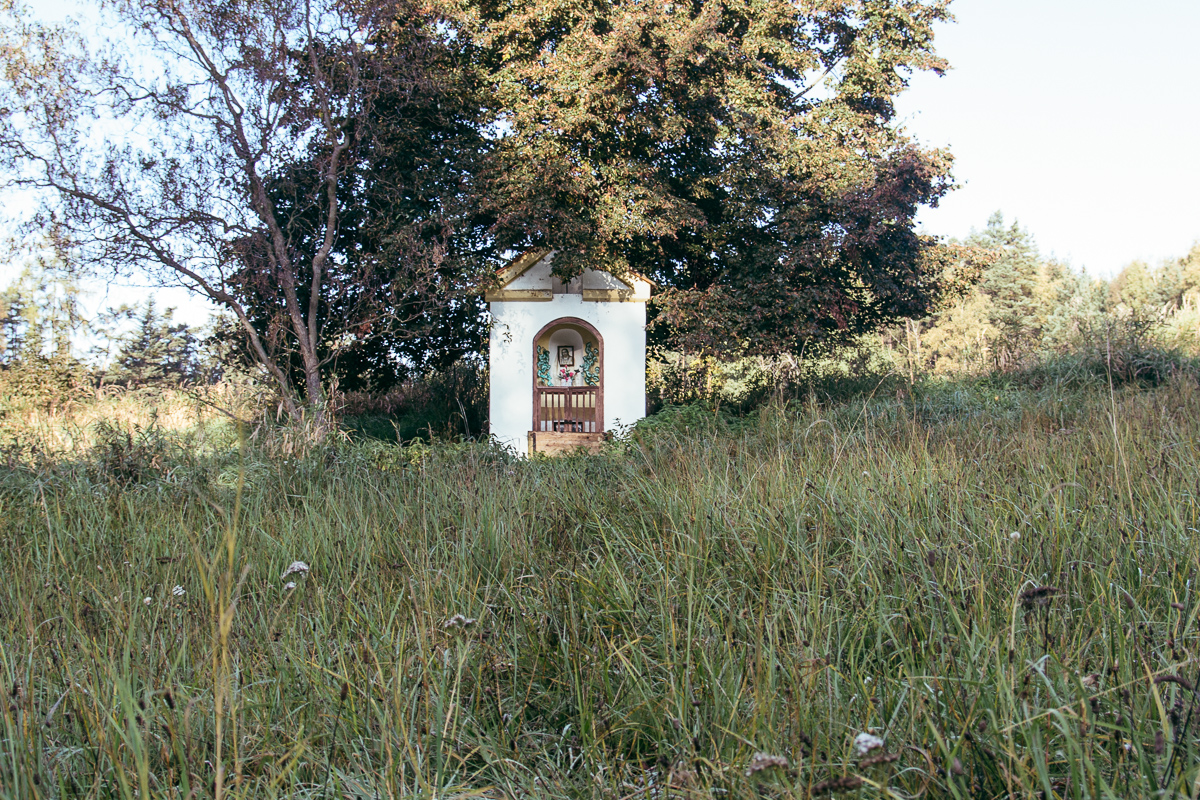 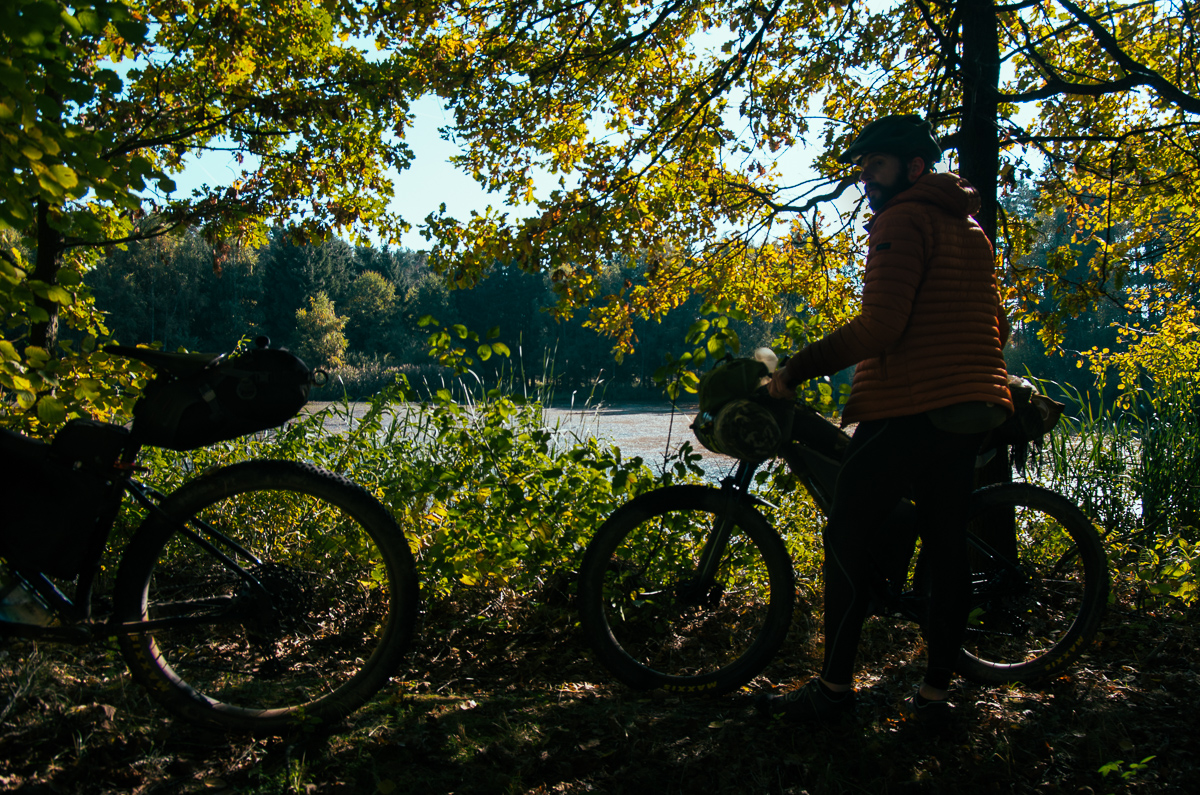 I knew immediately that I had stumbled upon a treasure: the place was like something out of a fairy tale. The meadow was dominated by a nicely repaired chapel. To my surprise, I discovered that there was a well in its foundation under a wooden cover. When I turned my back to the chapel, I looked for a change at the rocky forest hill that topped the nearby forest. Its edge was dominated by an ancient dry oak tree. But somehow I suspected that all the surprises would not be over yet. Where there is water and a landscape that pleases the eye, there will surely be a hidden campsite. And there was! Right on that little stone hill in the woods, I discovered a small covered fire pit. Here, in a nearby meadow by the Hluboká Pond and St. Barbara’s Church near Ratiboř, will be this year’s autumn reunion. This is where we will go!

Traps of the Tabor forests

On Friday afternoon I finish work at four o’clock, so I can pack in peace. I check the forecast and decide to take only summer insulation to my Dragon hammock. The night should be pleasant according to the dewdrops. By 8pm I’m done and I’m surprised that I’m going relatively light. (According to the others, I’m still carrying too much stuff.) In the evening I wonder how many cyclists will come. My phone gradually beeps with messages that mostly have the same content: ‘Hi Tom, I won’t give up after all, next time I’ll go. Enjoy.” I’m not angry, I get it. The weather has been really crazy this week and it’s just put a lot of people off. So you won’t be alone, my wife laughs. 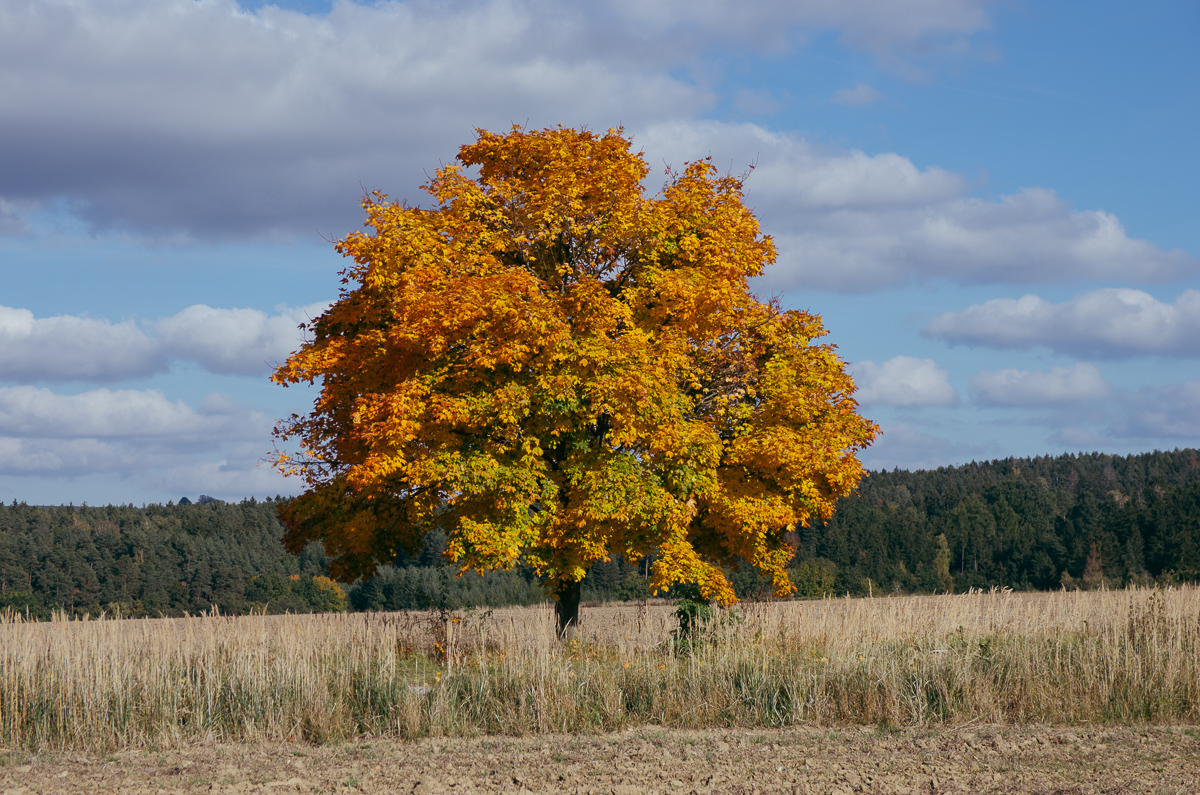 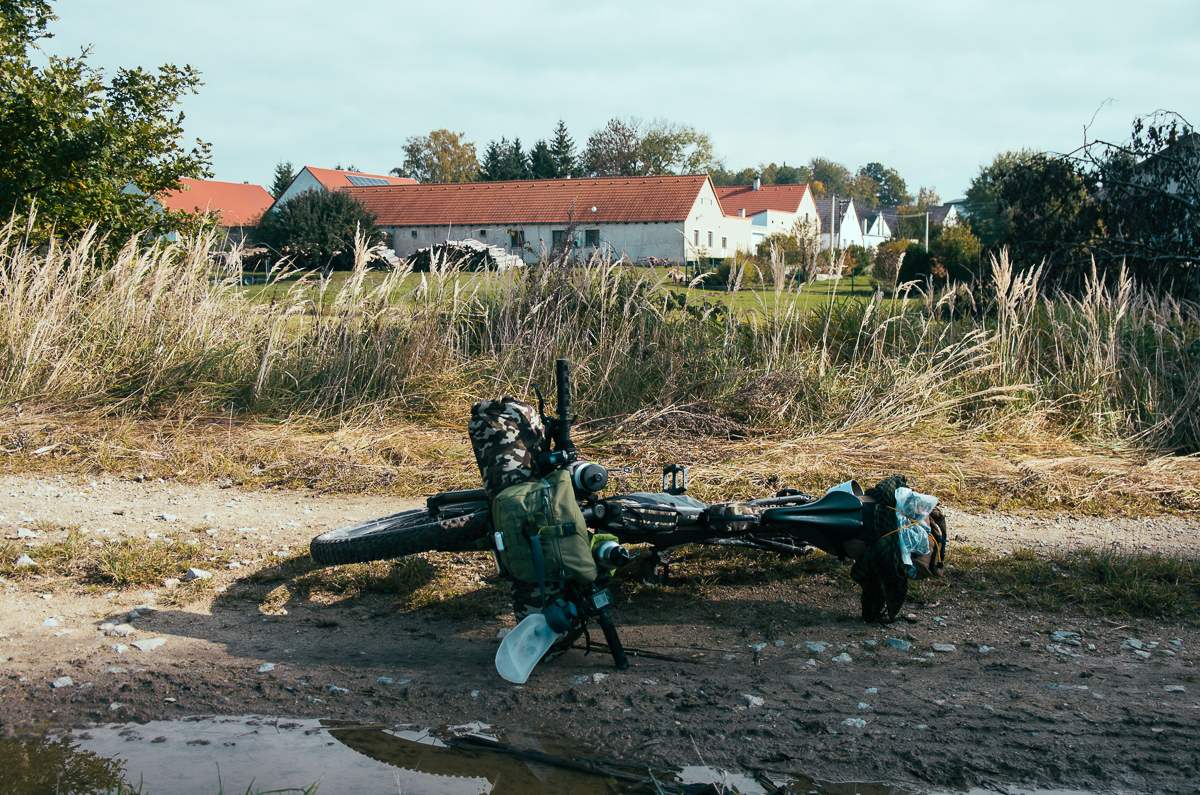 On Saturday at 8:00 I am already sitting on the train towards Tabor and enjoying the autumn landscape passing by outside the windows. After less than two hours I get off in Sudoměřice near Tabor, where I lightly replenish provisions for the evening sitting by the fire. I set off fortified with non-alcoholic Birello in the direction of Ratiboř and according to Koomot I have sixty-five kilometres ahead of me classified as mtb. The road goes quite well, and I stop frequently to enjoy the views of the landscape. Once again, it is confirmed to me that everywhere you look in our country is beautiful. I was so captivated by the Tabor region that I managed to go completely off the trail on one such love. I decided that rather than going back, I would continue in a new direction, because according to the map I should come across my original route again… So I got totally lost in the ferns. I wandered around in them for almost an hour, because I didn’t want to leave the woods into a field, because – as many will agree – dragging a bike across a field to somewhere where there must be a road is pretty shitty. But that’s exactly what I ended up doing, shamefully ripping my bike through the ravine where there was guaranteed to be a road 😊. Well, there wasn’t. There were reeds and only after that a path that led me to the originally planned route. Another hour in… yes, there. 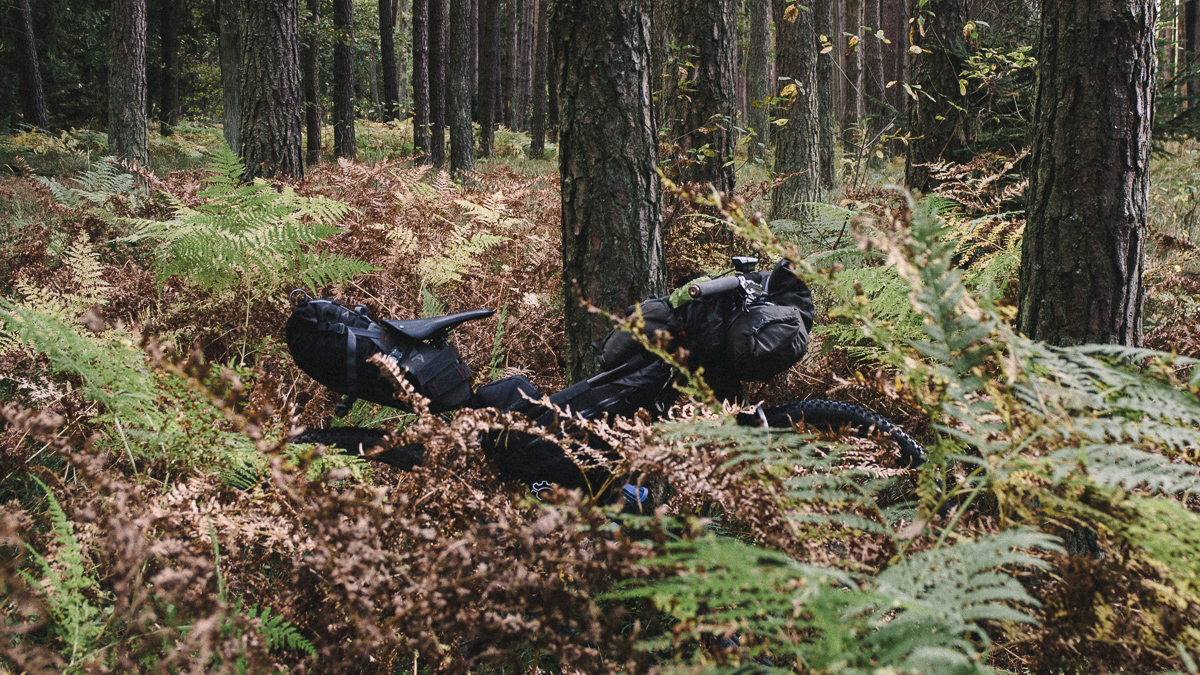 At about the forty-eighth kilometer I reached another – and much bigger – forest, where I ended up on a road totally destroyed by harvesters. In addition, my rear wheel started to crack suspiciously, but it’s so covered in mud that I ignore the sounds. Komoot can present one with interesting trials – and a lot of people don’t like it for that very reason – but aren’t such “minor” obstacles the spice of any journey? Ugh. Glancing at the map, I figured the best thing to do again was to stay the course and just ride it out. So, for a change, I put in three kilometres of soggy hell, wading shin-deep in mud even where I thought the ground would be hard. I was out of the woods like a meat grinder. At this rate, I’ll be late for the reunion. 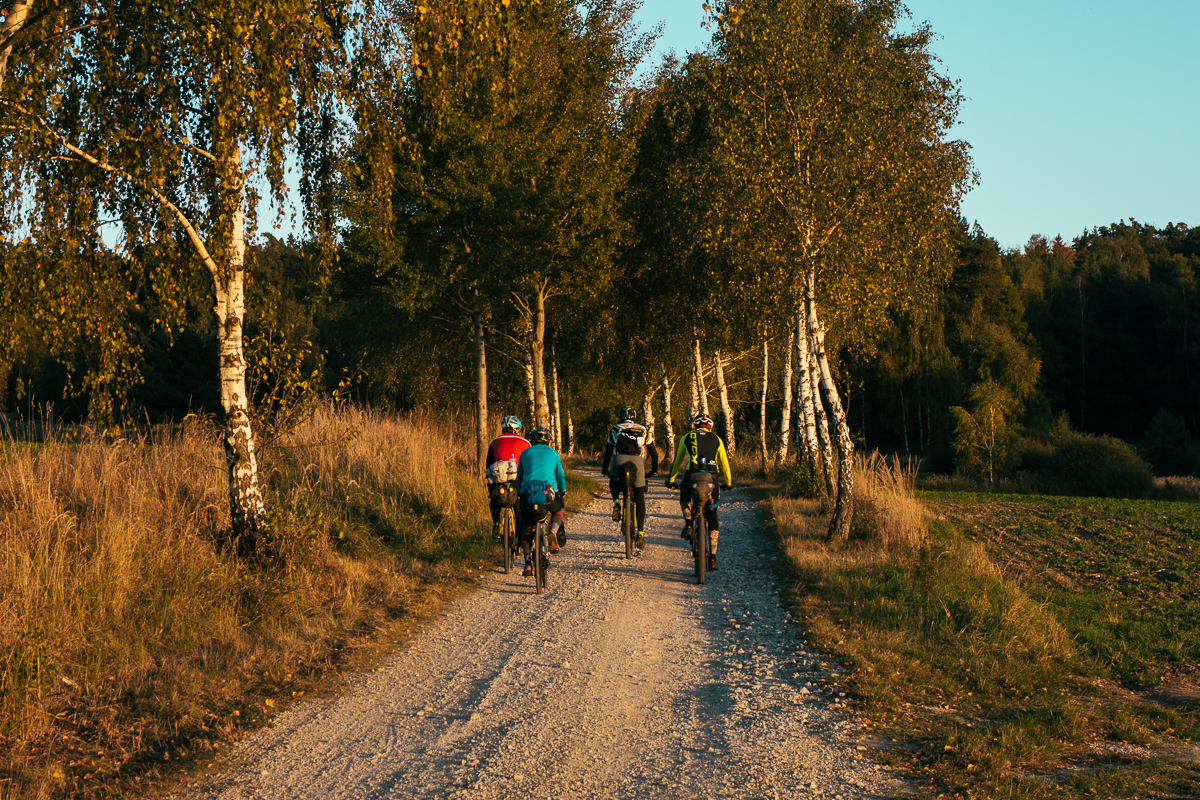 There were nine of us

I’m sitting under an oak tree, changing the route to the road option. The rest of the way to the rendezvous point, I’m pulling myself together. Tired, but happy, I arrive before half past five in Kardasova Řečice, where I meet other adventurers at the food court. I meet Tomáš, who was at last year’s autumn gathering in Kumburk. After a while also Honza arrives, who for a change experienced with me the mosquito hell of the last Swift Campout gathering. But there are also new faces for me – Jenda and Petr with his friend. Around six o’clock we all set off for the last seven kilometres of the journey and enjoy the golden hour. The other guys point out to me that there are terrible noises coming from my rear wheel. We arrive at the campsite in daylight and find that Dominik, who was at this year’s spring reunion in Plesivec for a change, has been swinging in a hammock by the fireplace on the forest hill for twenty minutes. We are missing it! Before darkness falls, Marek and another friend arrive, as well as Ondra, who is just starting bikepacking. So the turnout won’t be bad after all. There are nine of us. 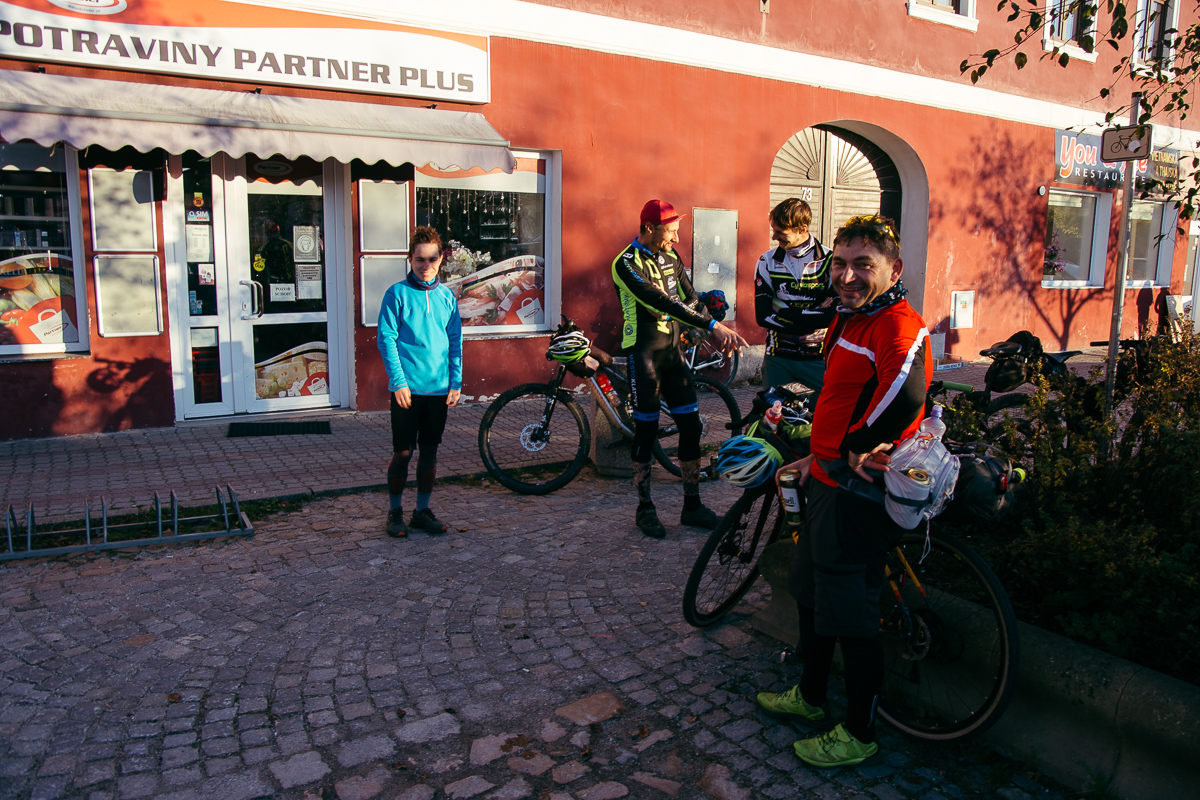 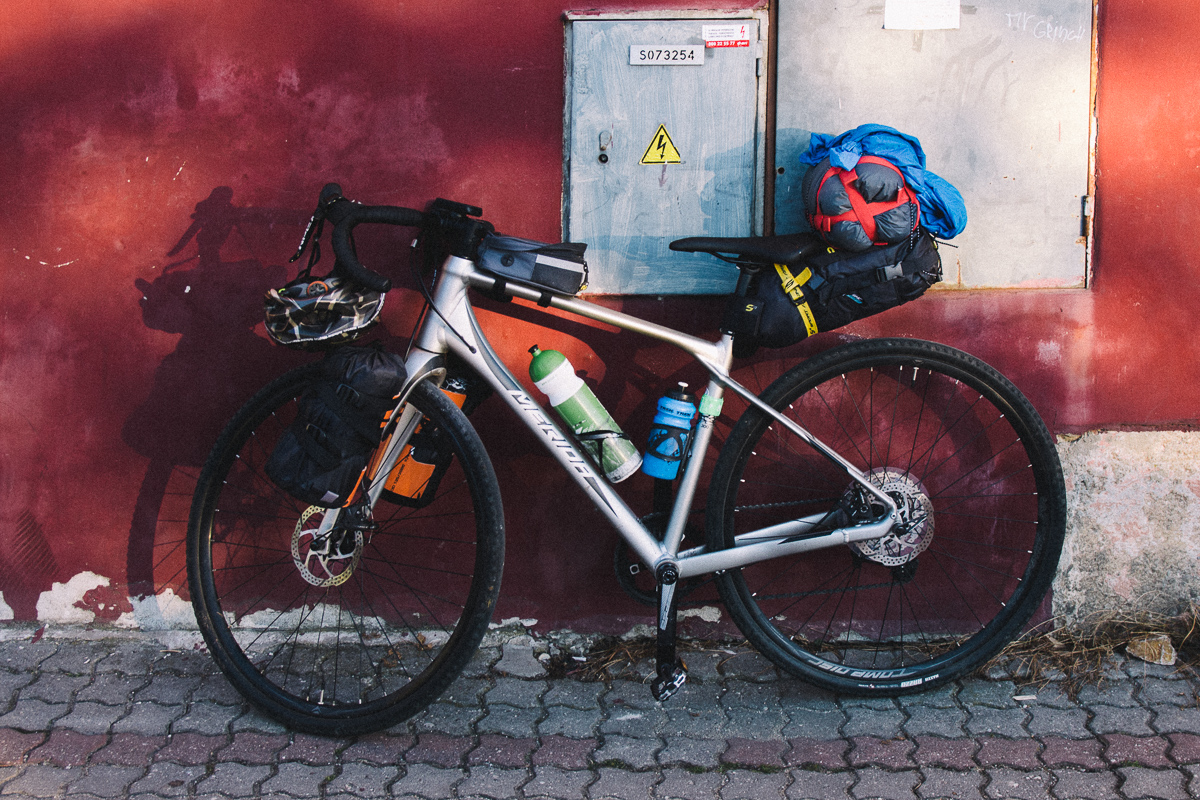 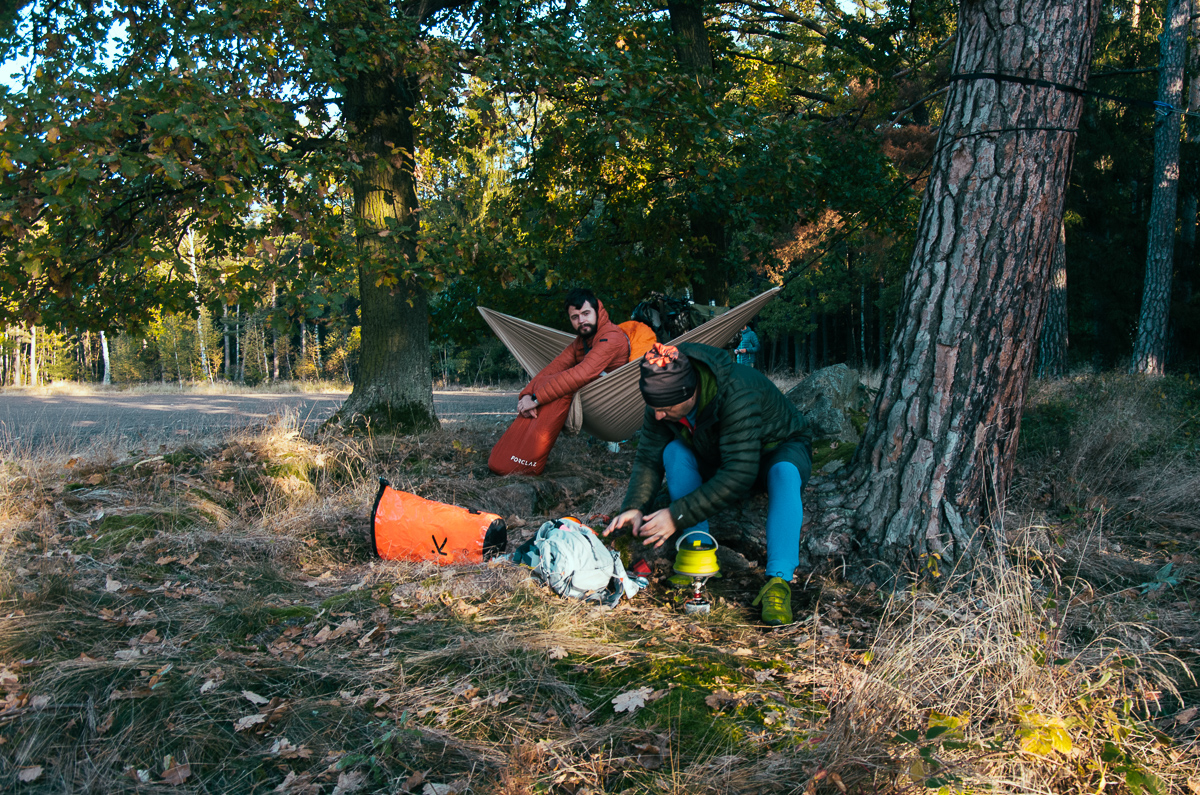 We hang hammocks, set up tents or lay Tivek. Later, by the fire, I note that I have not experienced such a good evening for a long time. Long into the night we tell each other stories that are really scary. (Do you want to hear them too? Come to the next reunion!) Ondra of course gets some valuable bikepacking tips to start with, but he has to say goodbye to us that night and goes back home – he doesn’t have his sleeping gear yet. But what is not today will be tomorrow, right, Ondra? 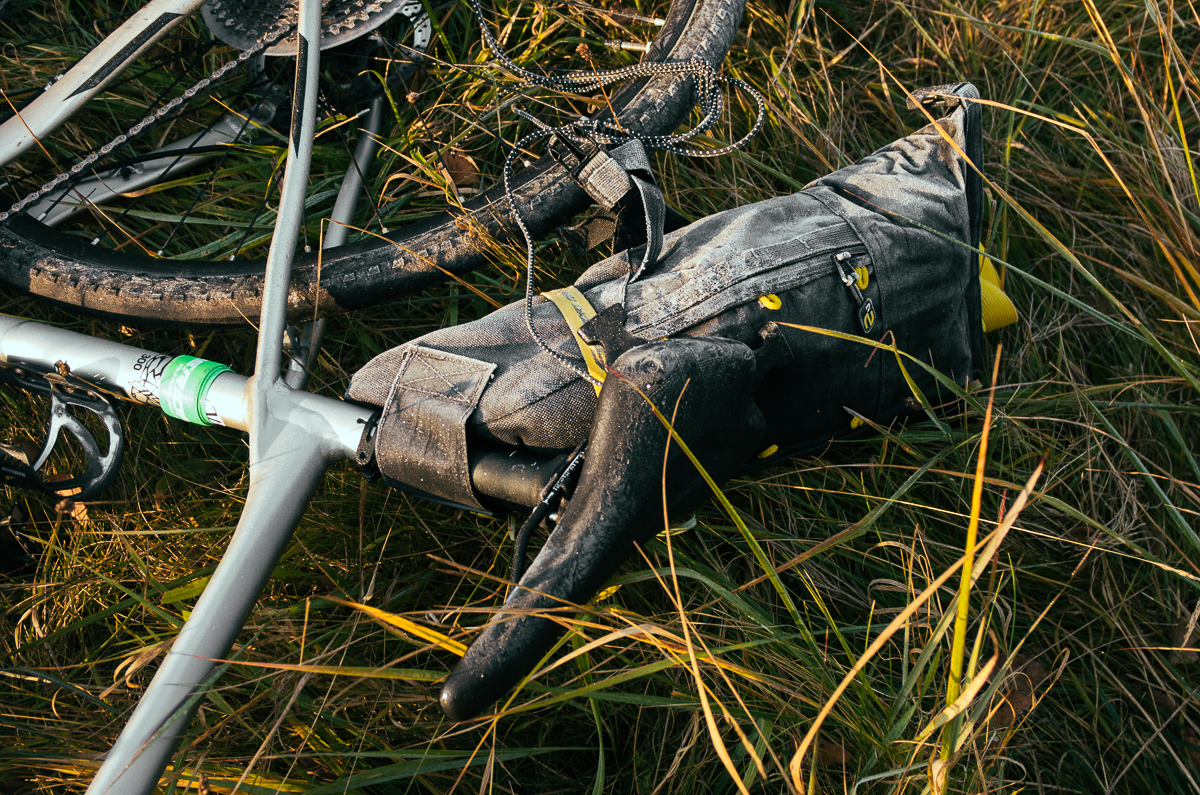 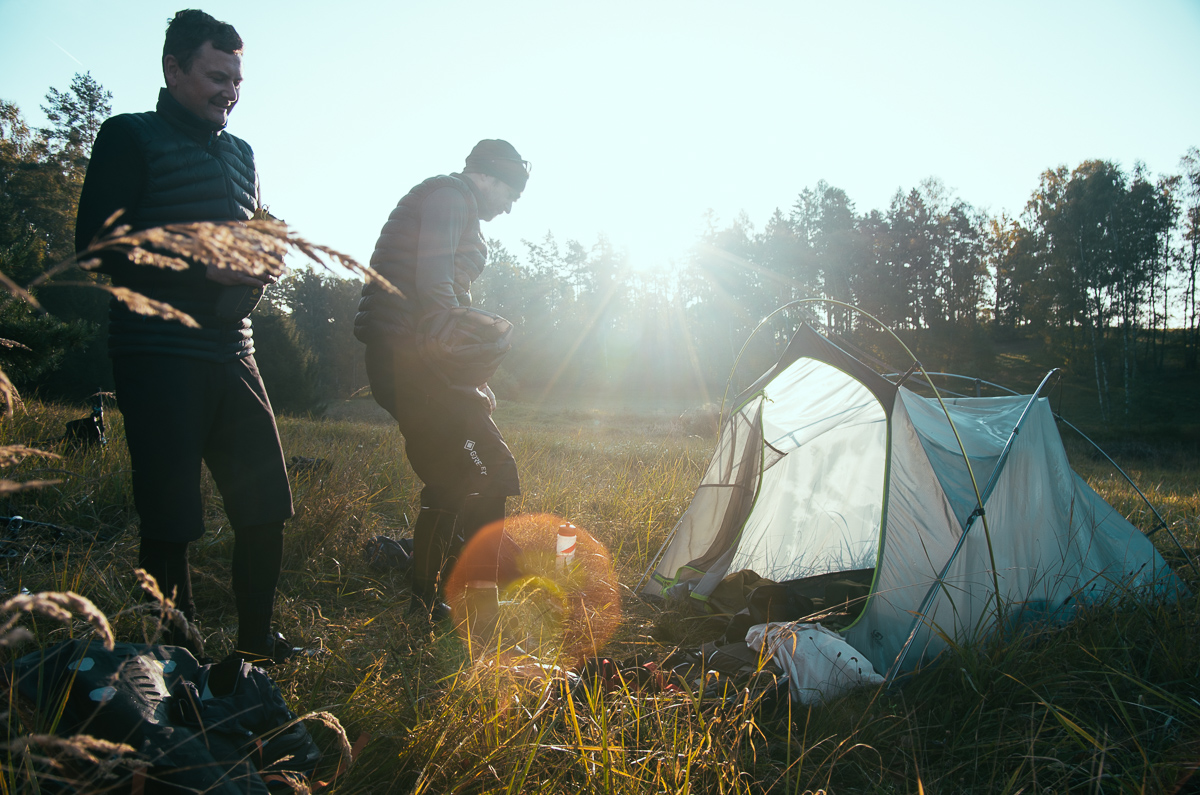 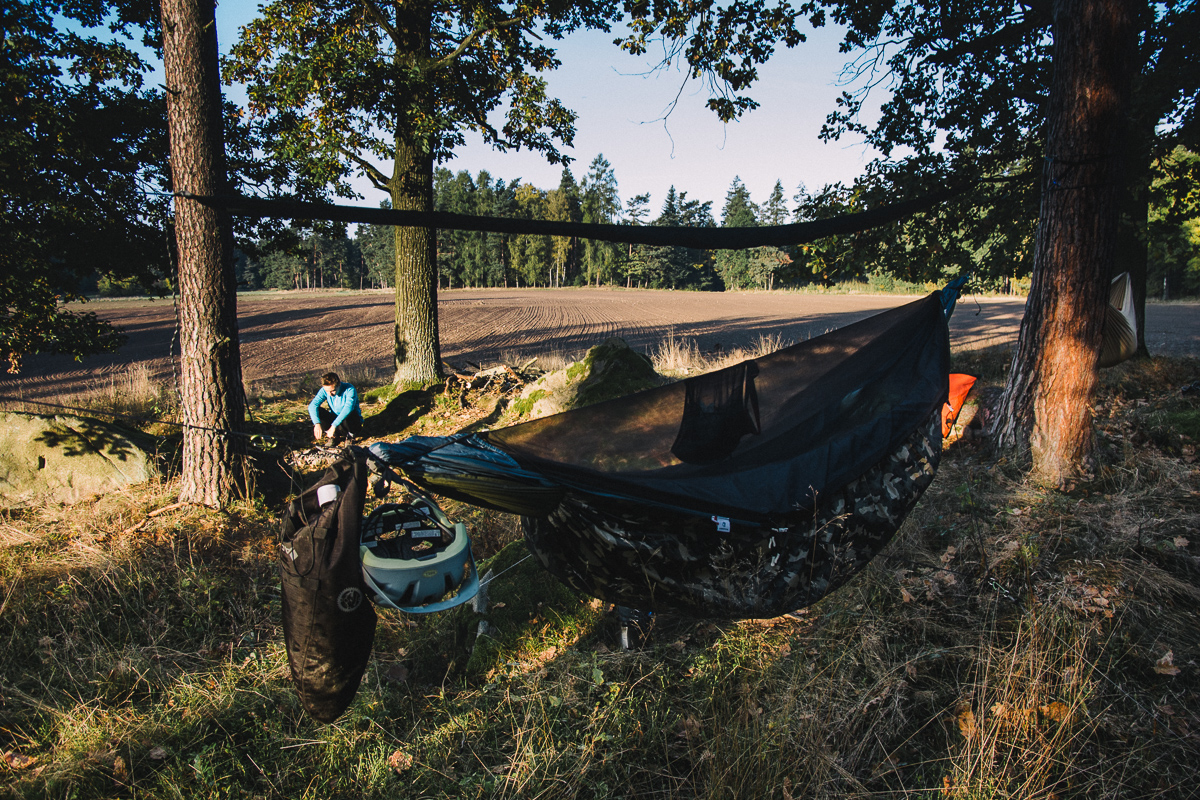 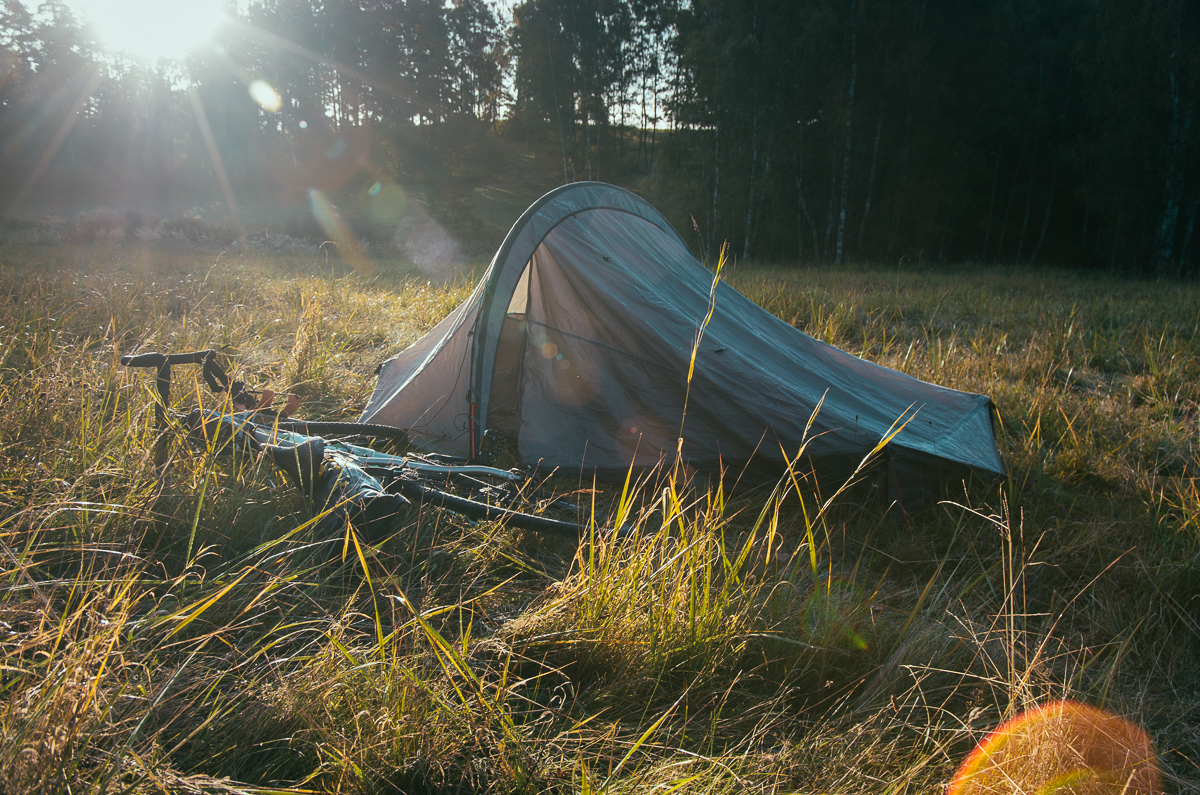 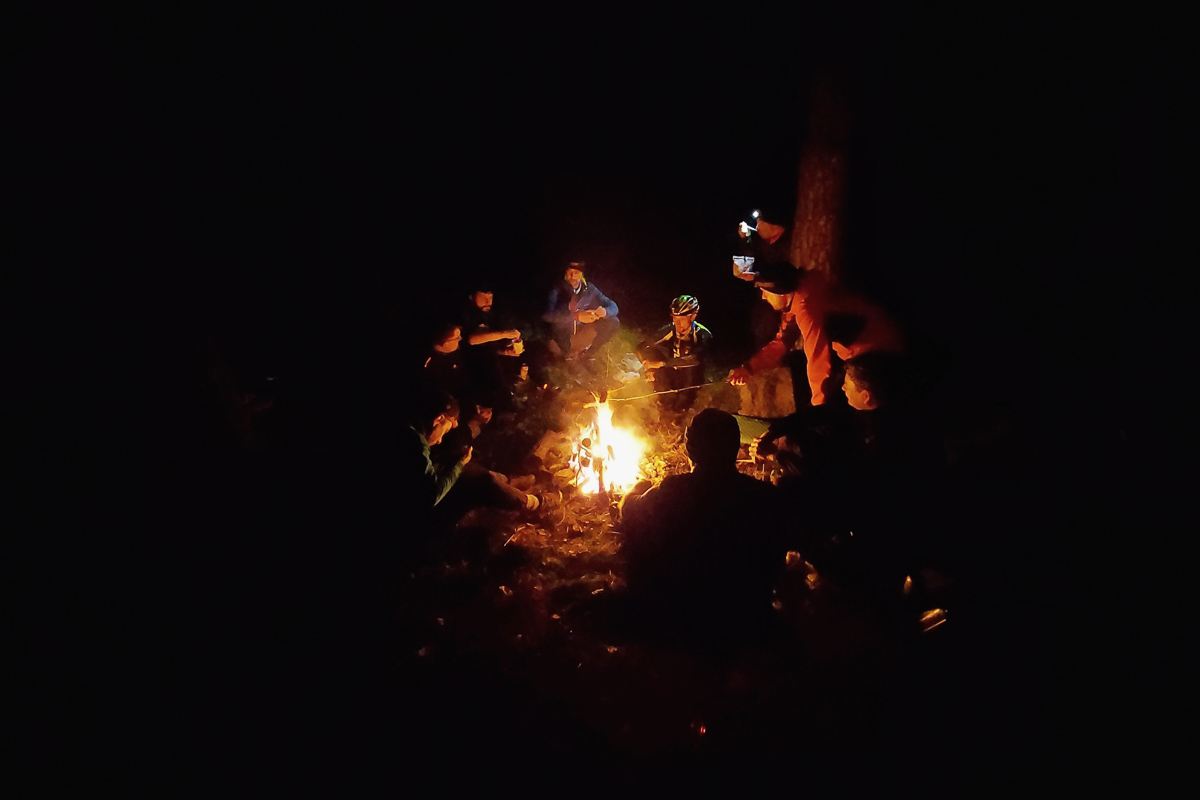 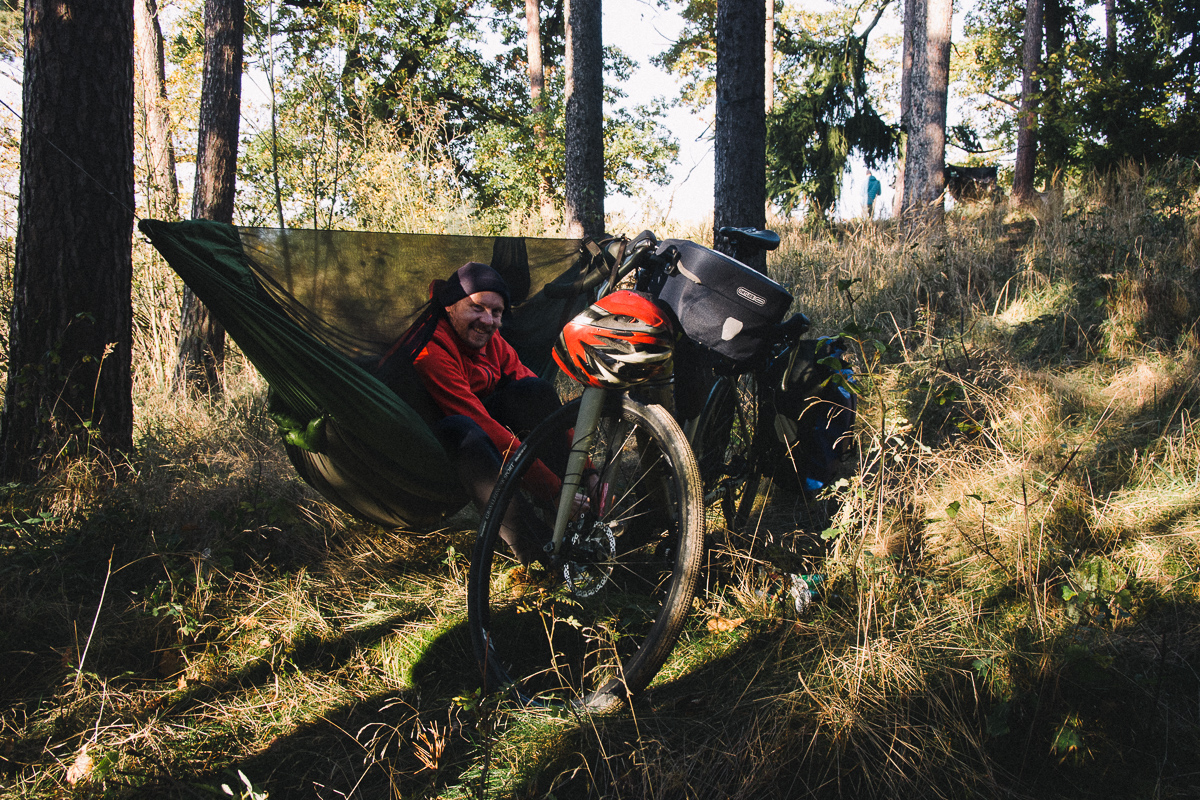 The night is not cold, the sky is as if swept away and the moon is shining in the sky. Around one in the morning, one by one, we gradually fall off. In the morning we learn from Tomas that mice visited him during the night and robbed him of his nuts. They made such a racket that they woke him up. The boys who were camping a few meters down in the meadow have so much condensation that they could make tea out of it, but all this is just a negligible discomfort, which simply belongs to travelling. The experience doesn’t have to be pleasant, especially when it’s intense. Who have I heard this from before? 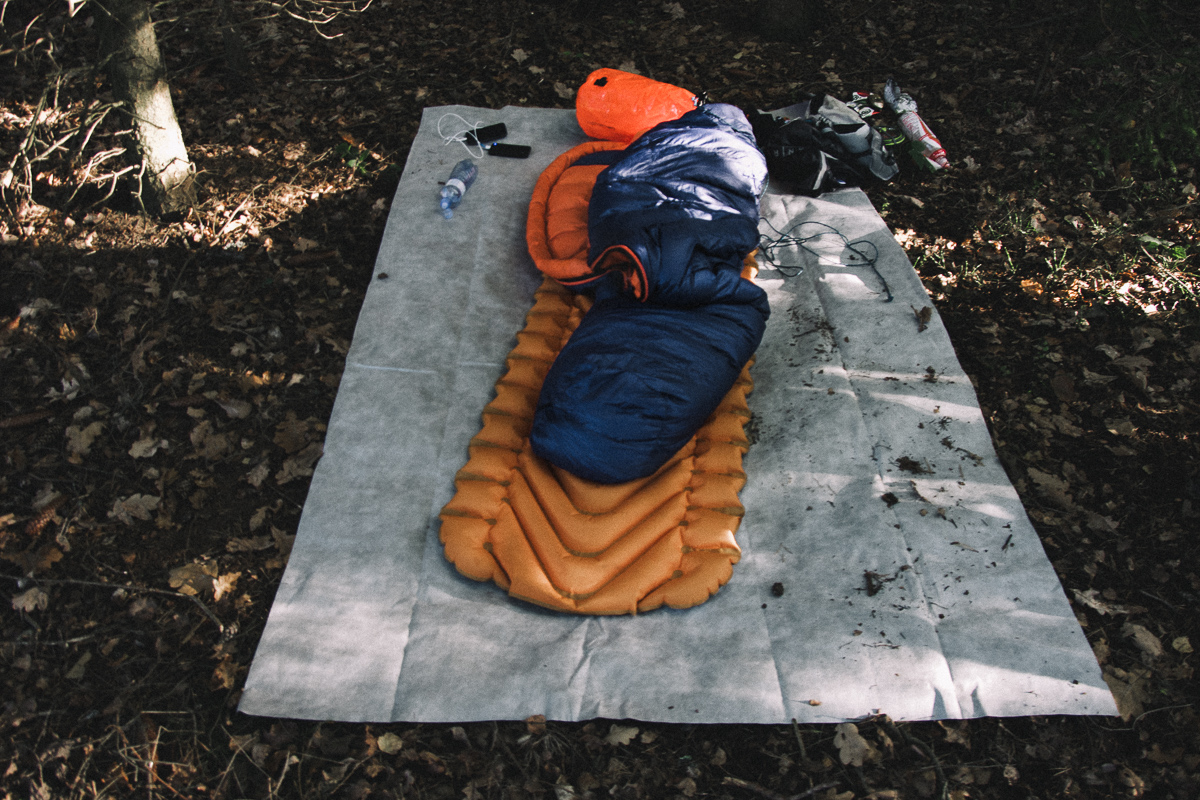 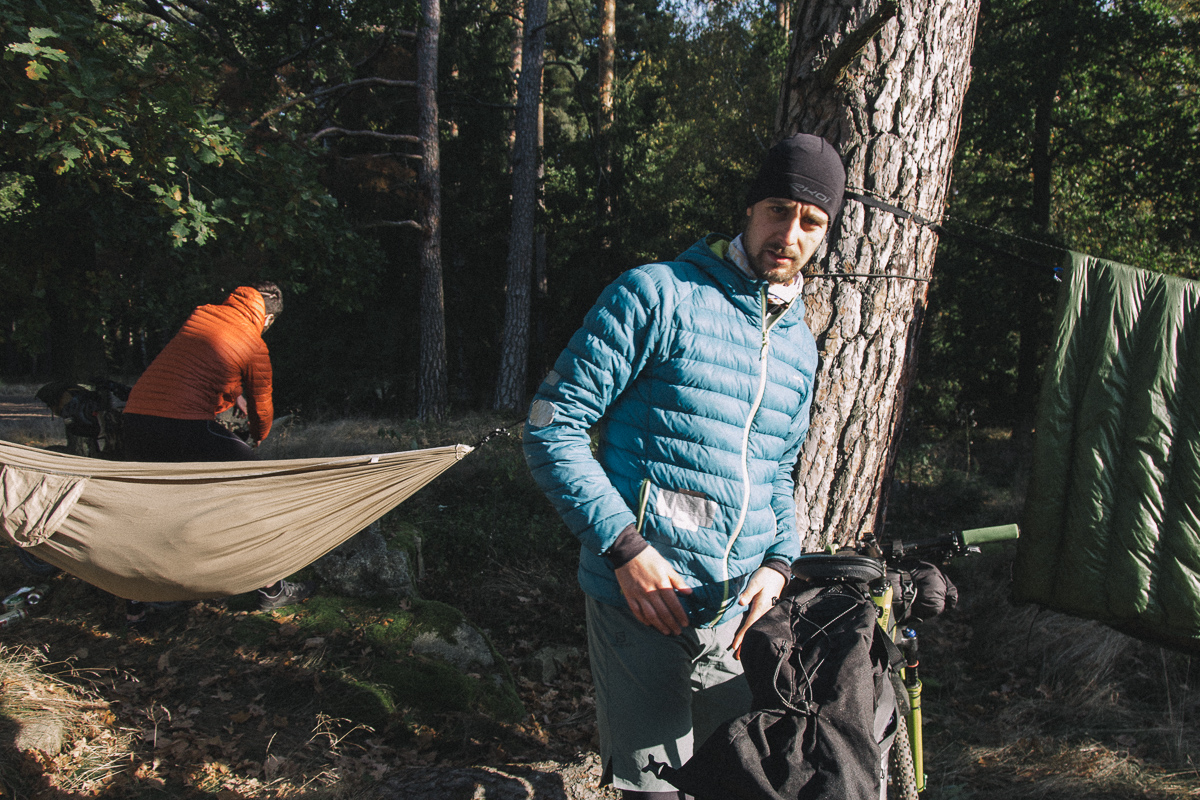 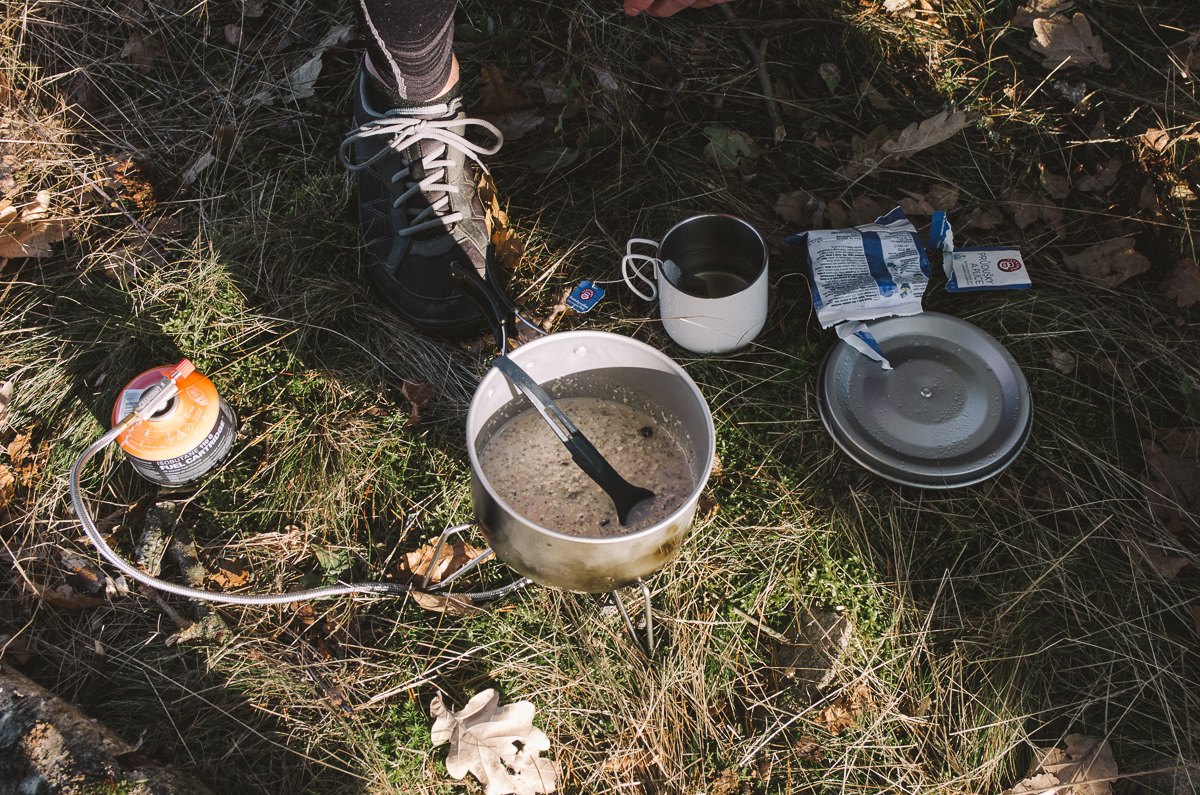 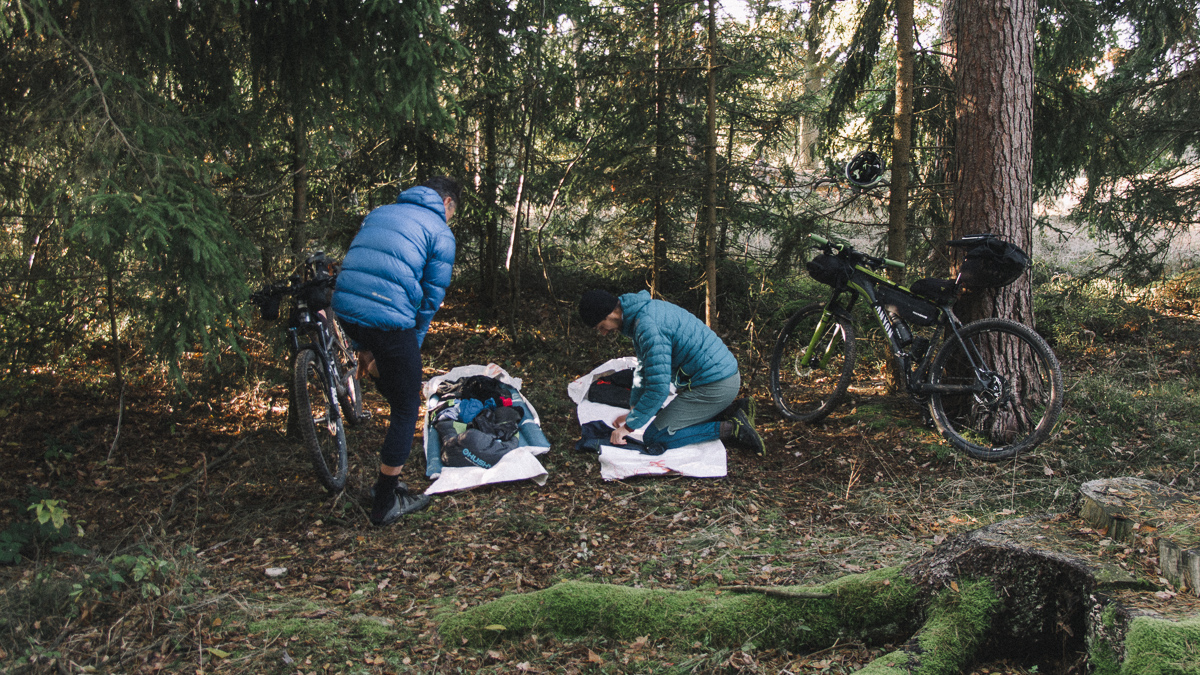 On Sunday, by 10 a.m., we gradually set off in our own direction. I go with Dominik to Tábor by train. We have some forty kilometres of easy going on dirt and forest roads ahead of us. We take a lot of pictures and we are in no hurry. Dominik also takes a closer look at my rim and we finally know why my rear wheel has been squeaking all this time. My 29+ dropped rim is cracked at almost all nipples. The rear wheel is basically kaput. The cracking gets louder and louder, so we reschedule the rest of the route to road only and slowly proceed to Tabor, all the while I’m shivering in terror to finish. But as they say, everything bad is good for something. A change of route takes us to the unassuming village of Samosola, where they don’t have an ATM, but a Gingerbread ATM  for a change. If you ever drive by, have a tasty gingerbread. They are hand painted and very hilarious. 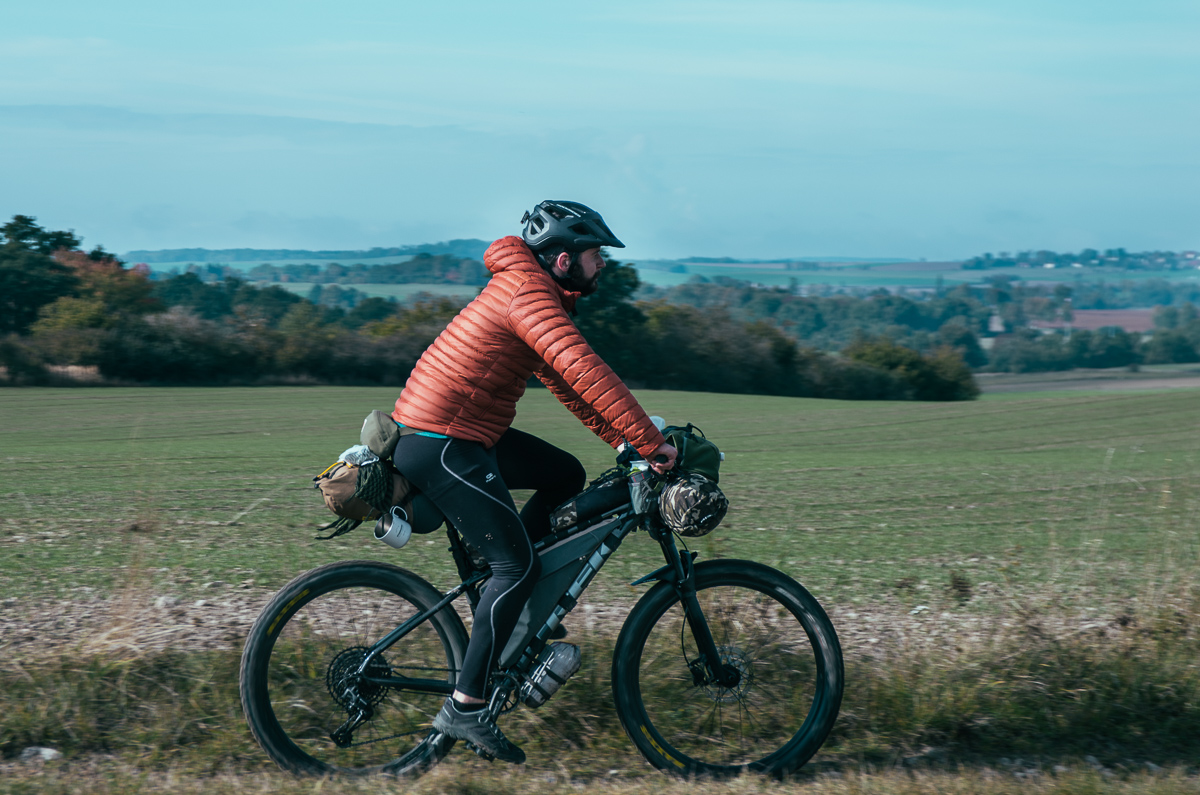 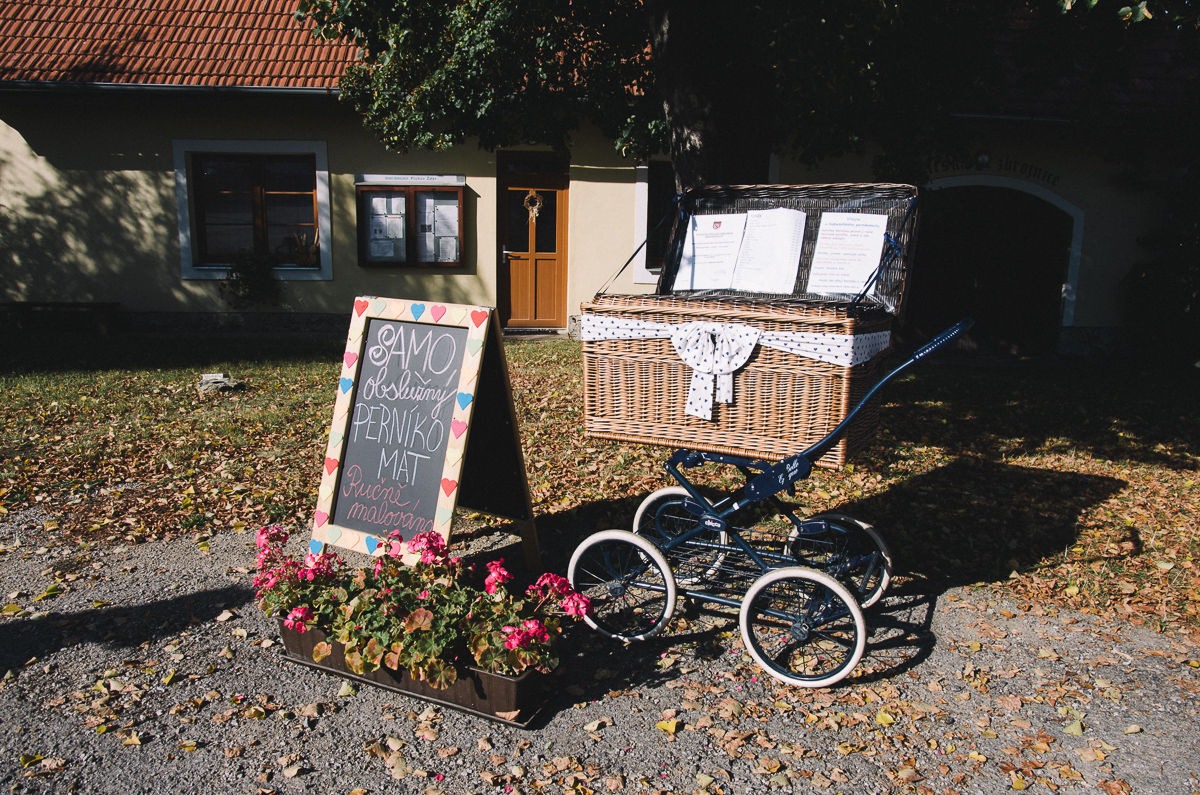 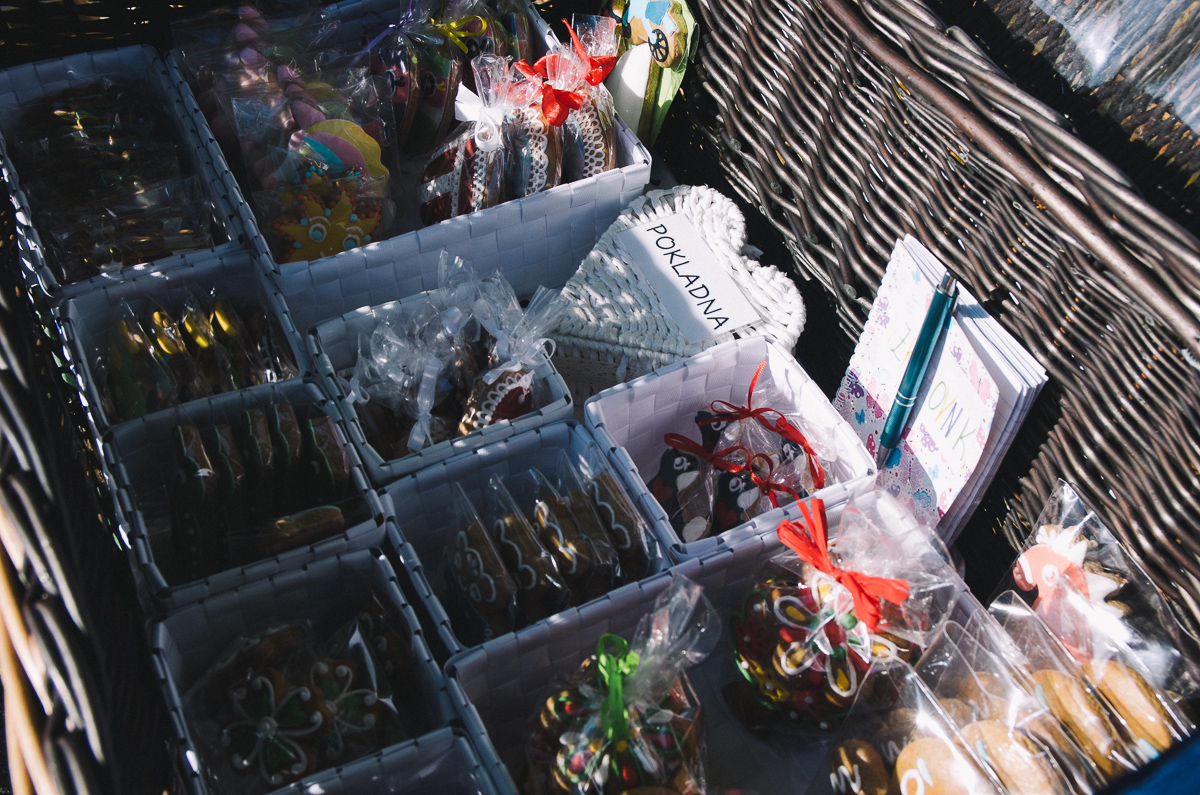 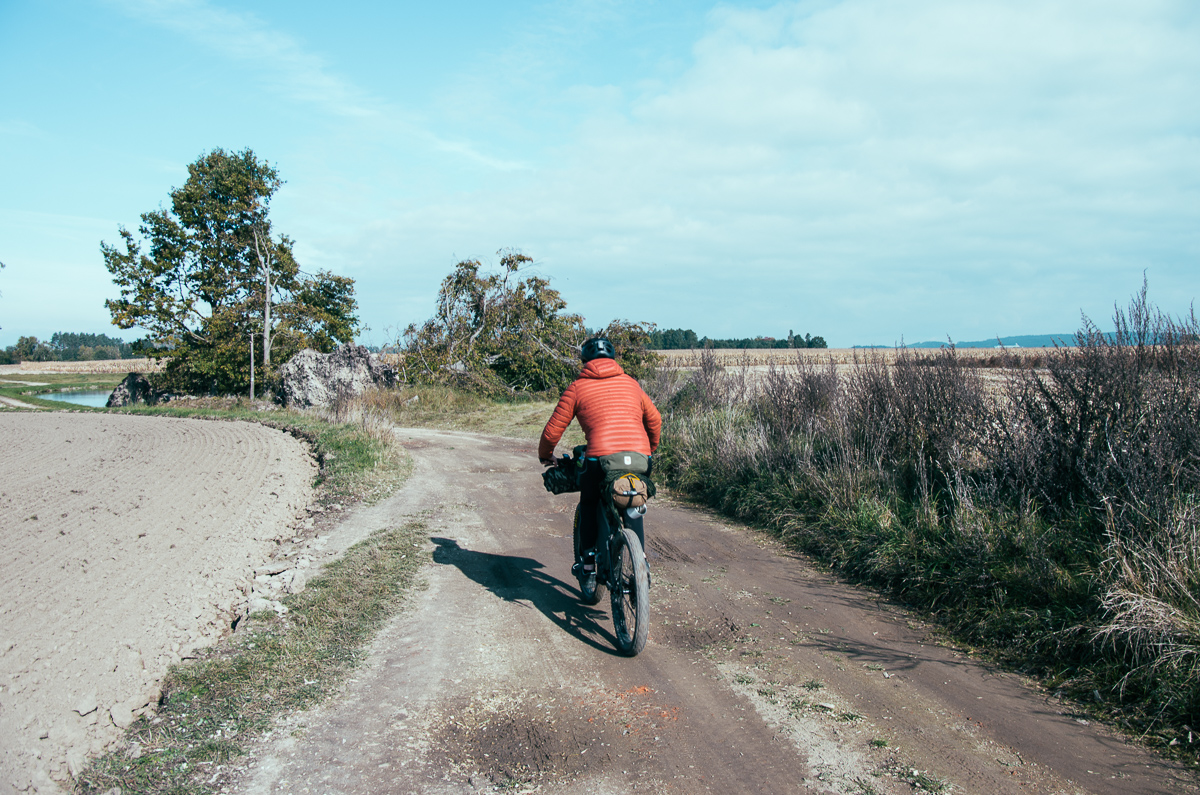 During the train ride I have time to sort out my thoughts and replay in my head everything I experienced, and I thank everyone who came to the reunion. I appreciate it and would love to meet you again because bikepacking brings us together.