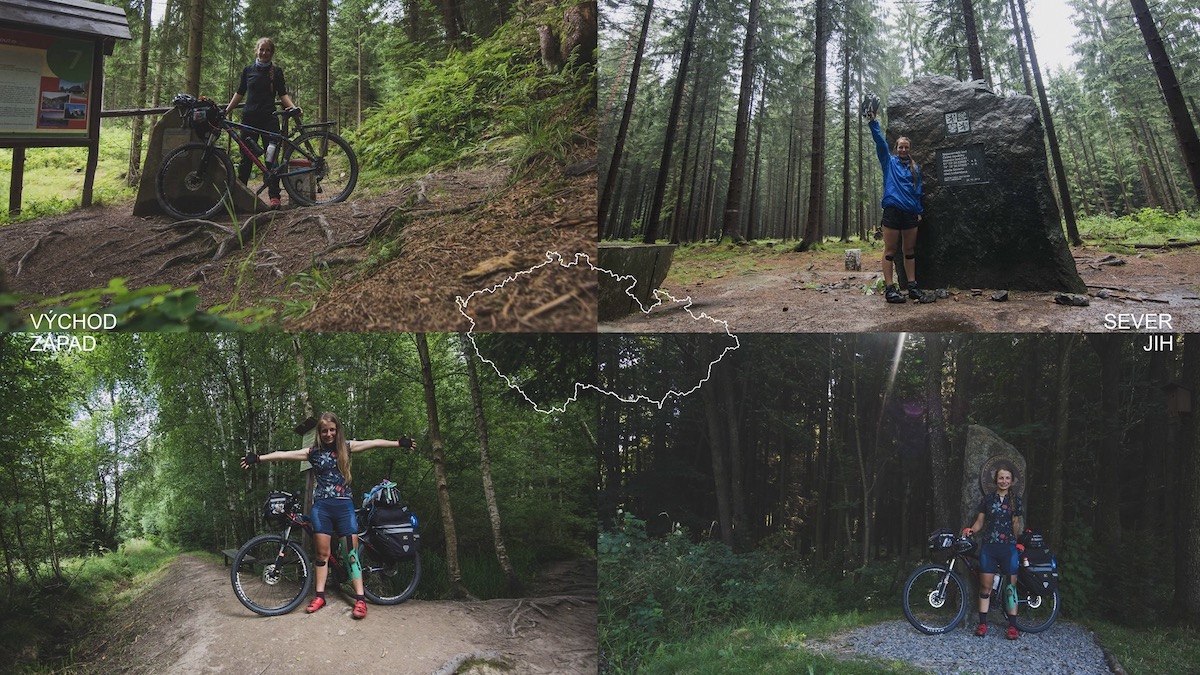 Around the border III

Journal entry 16.7.2018 "I left early this morning. Via Aš, Hazlov, Fr. Spa do Chebu - cake and coffee”. Rested, smoldering and excited for the next kilometers, I drove through the already familiar landscape toward the southernmost point of the CR.

Journal entry 16.7.2018 "I left early this morning. Via Aš, Hazlov, Fr. Spa do Chebu - cake and coffee”. Rested, smoldering and excited for the next kilometers, I drove through the already familiar landscape toward the southernmost point of the CR.

I’ve always said that when I go from the West, I’m actually going downhill. At home, we always looked at a map of the Czech Republic, and as a child I thought it was downhill from the north of Bohemia. Then what about from the west? Despite the scare that there were hills to come after all in the west, and a difficult part of the journey, I enjoyed it immensely. But I traded the terrain sections for asphalt. After all, I did get a little pain from time to time. 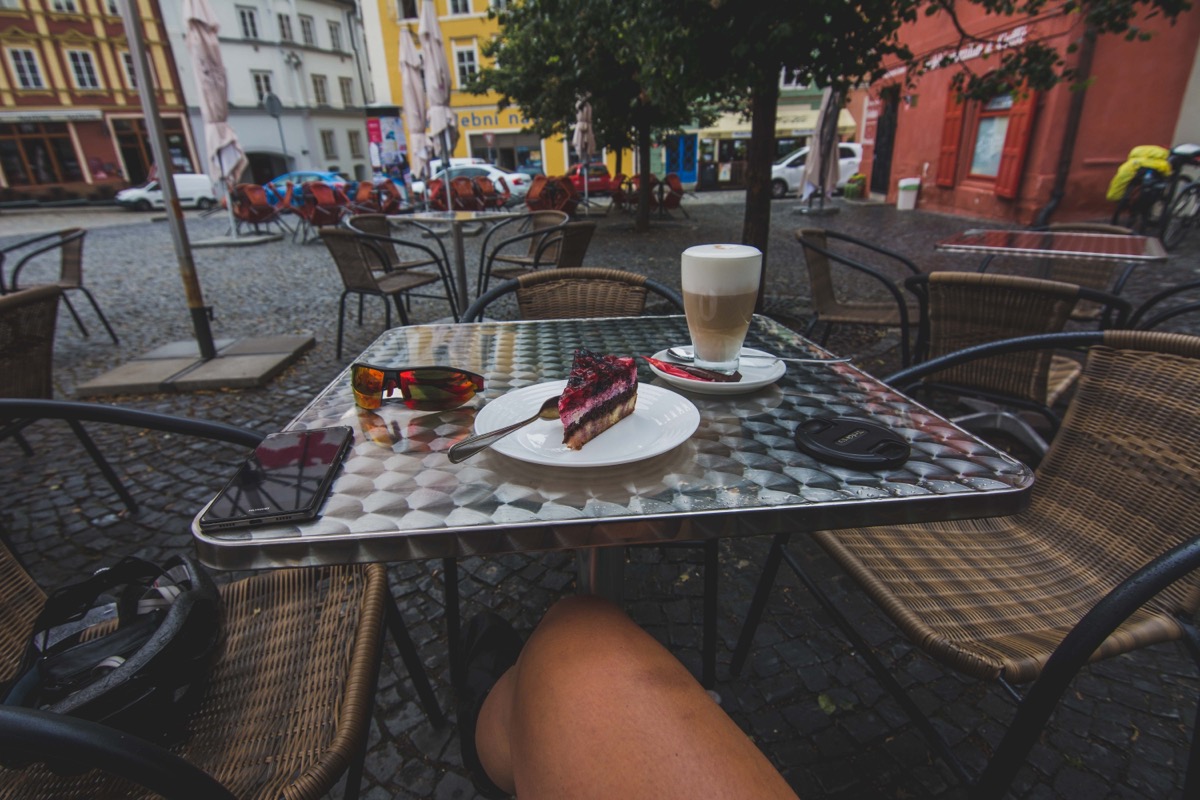 At Cheb, I had coffee with cake to celebrate my dad’s birthday. From the city I rode up the bike path that ran along the former first railway line that linked this city to Germany, and the first train to Cheb had once passed here. The village of Krásná Lípa, which is commemorated by a monument, has also fallen victim to the Iron Curtain. It’s funny how I can just cross the border here as much as I like. I can drive around places that weren’t allowed to go slowly before. With a strange mixture of feelings, I move on. Luckily, Maria Loreto’s pilgrimage site and the Church of the Holy Spirit get in my way, where my thoughts miraculously calm down and I can cross the border with a calm mind and enjoy Germany’s considerate drivers. 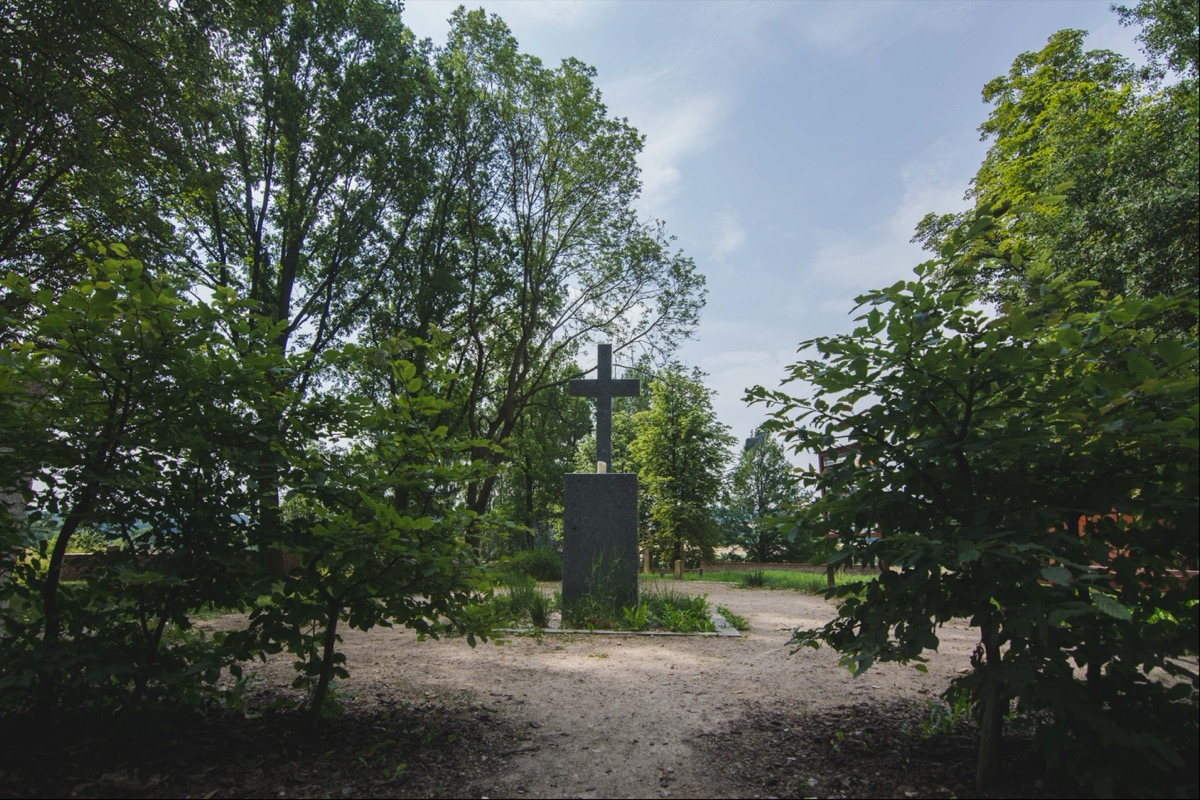 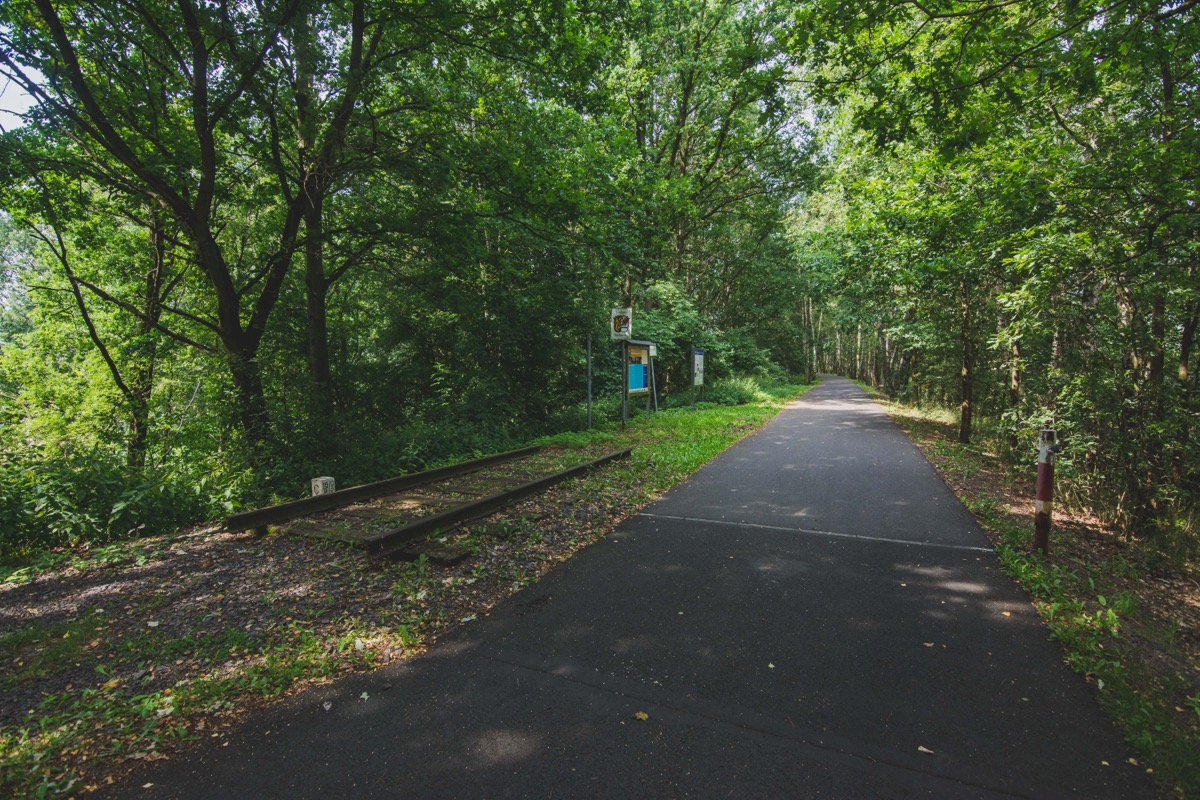 As I drove past a nice pike that said “kein Trinkwasser,” I couldn’t think of anything better to do than rinse my face, drink and film a full bidon. It was on my bike that I texted a friend who speaks German to translate it for me. “Do not drink,” the text read. Well apparently my bowels are resistant, since I didn’t feel any effects after drinking a whole bidon of non-drinking water. 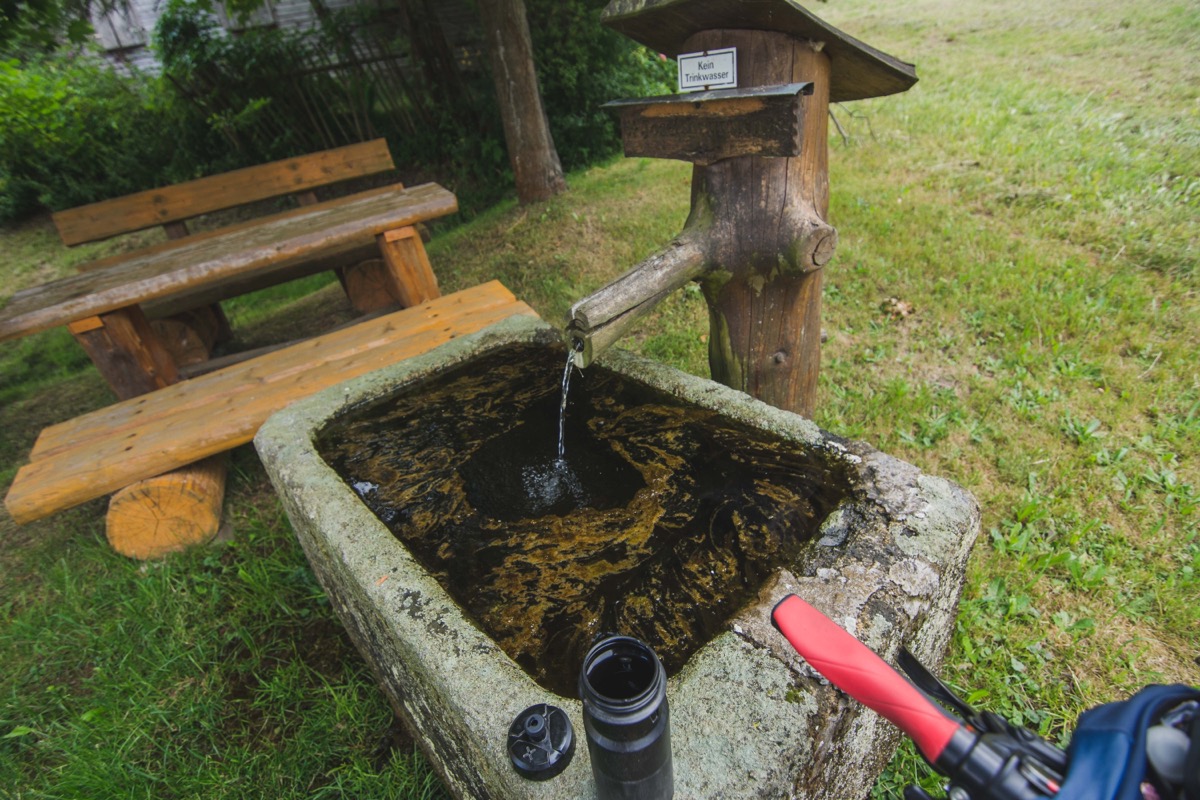 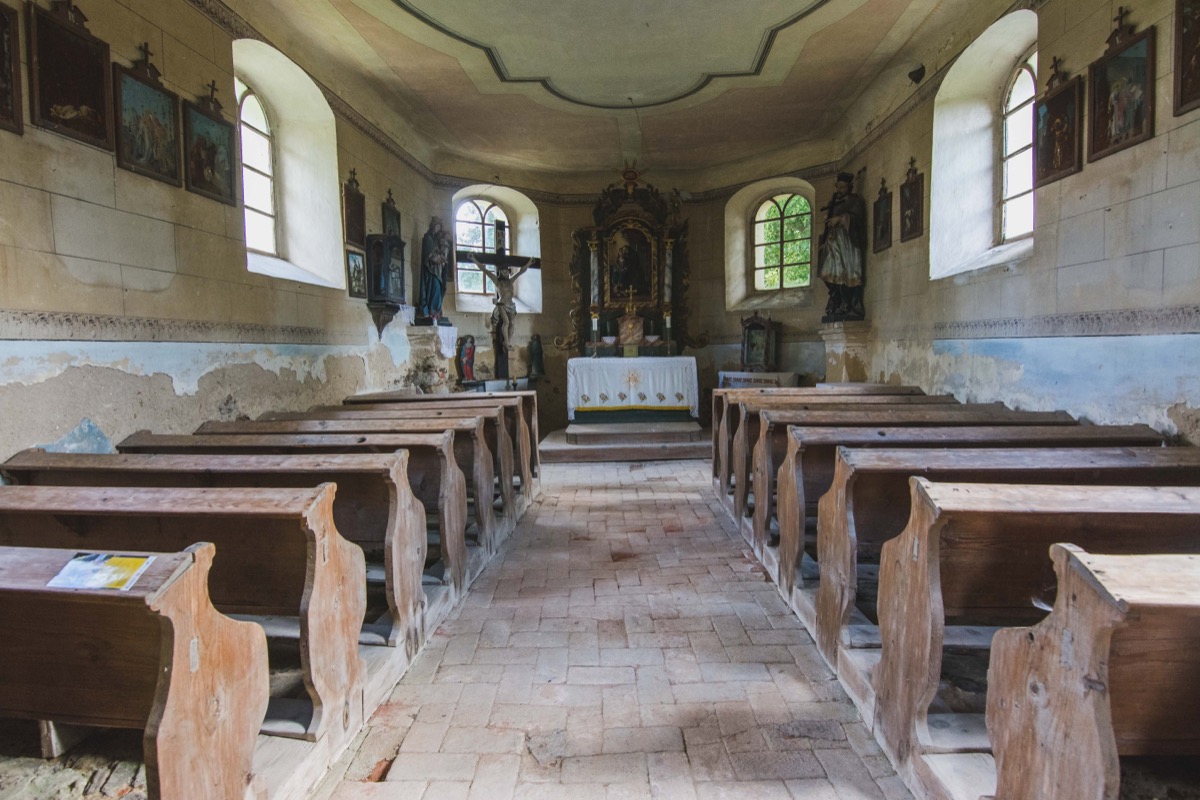 A thunderstorm began to follow me across the border. So I didn’t linger much, and raced as fast as I could. After crossing back into Bohemia, I was caught off guard by the absence of pubs, inns, shops, putos, just about anywhere to hide for a while, and especially to eat. The rain caught up with me in Tachov, where I finally came across an open restaurant.

Satisfied, fed and dry, I drove into the Czech Forest. Or rather, to its limits, where it was wonderfully quiet. He accompanied me to the shelter just beyond Whitehall below Radbuza. The ideal place to sleep had been made into a pretty little spring just a few steps away, and an ever-present calm. 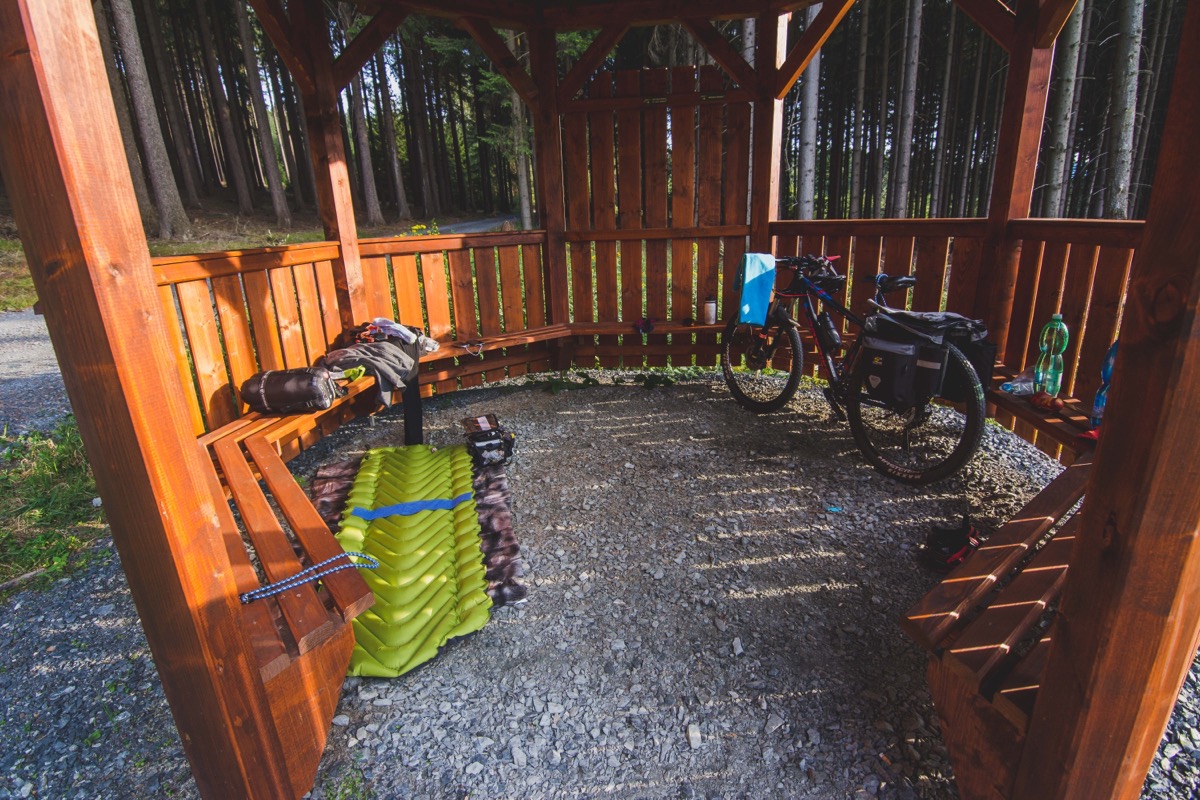 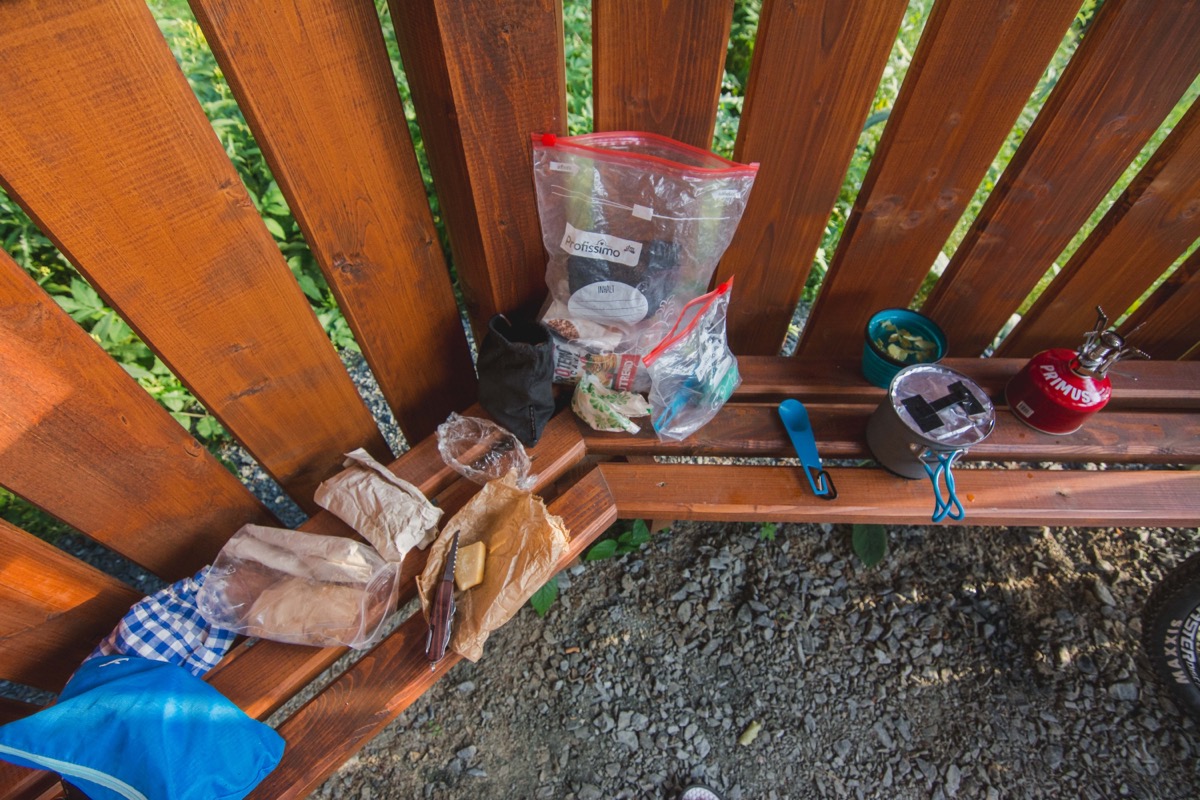 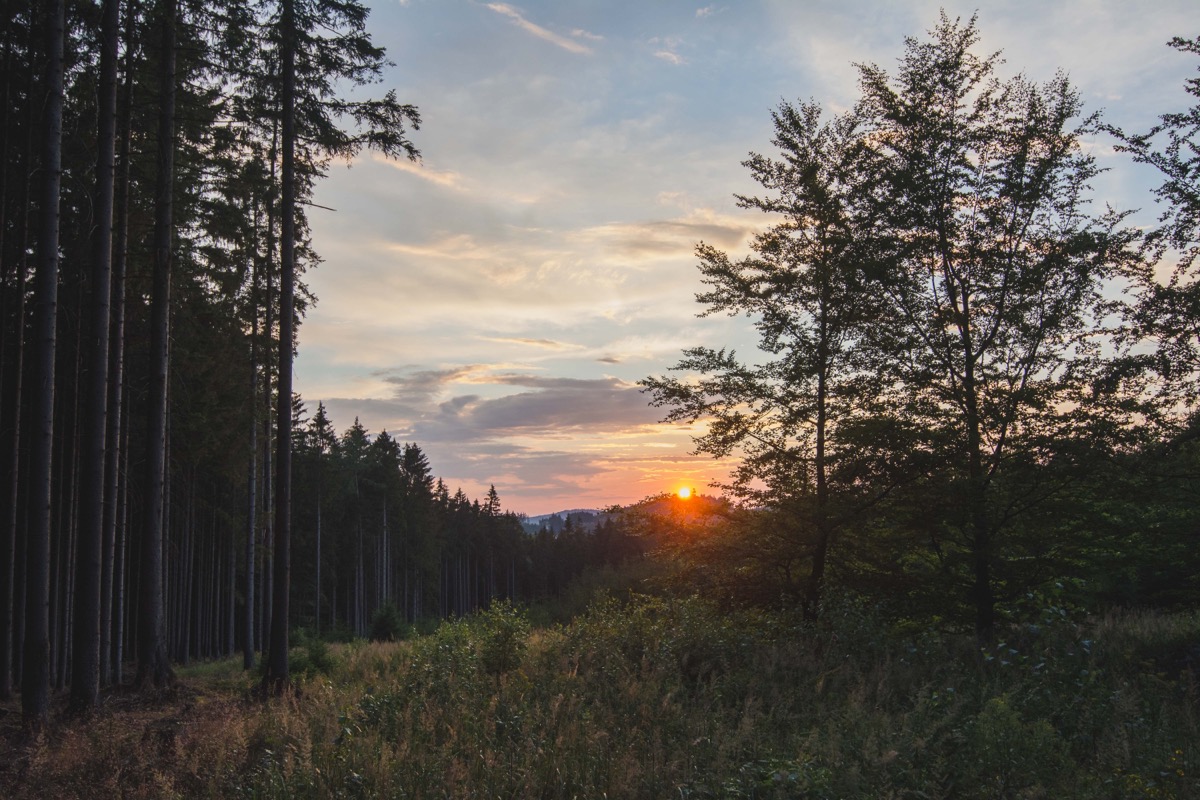 I must confess that the next morning is neither in my diary nor in my head. Just one picture of the Bohemian Forest, then Domažlice, pancakes and sitting in a park near the square. My perception of the landscape was slightly overwhelmed by the pain in my knee, and I was guided all the way to Nyrsk by autopilot. When I couldn’t find a nice lunchtime meal there, I let myself be led into the hills on an empty stomach. Only the titles of Fucker and Onen World took me out of a strange mood. On Maple, there was no resisting the painkiller and the little snacks. 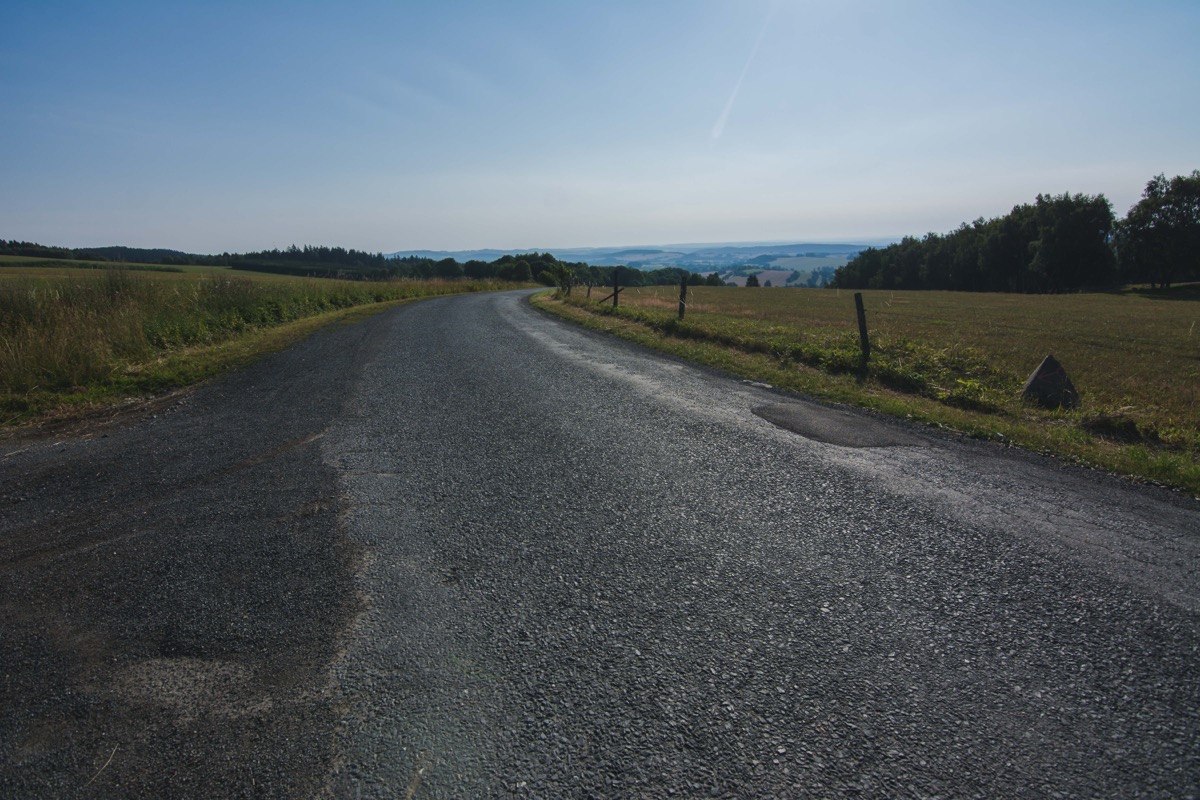 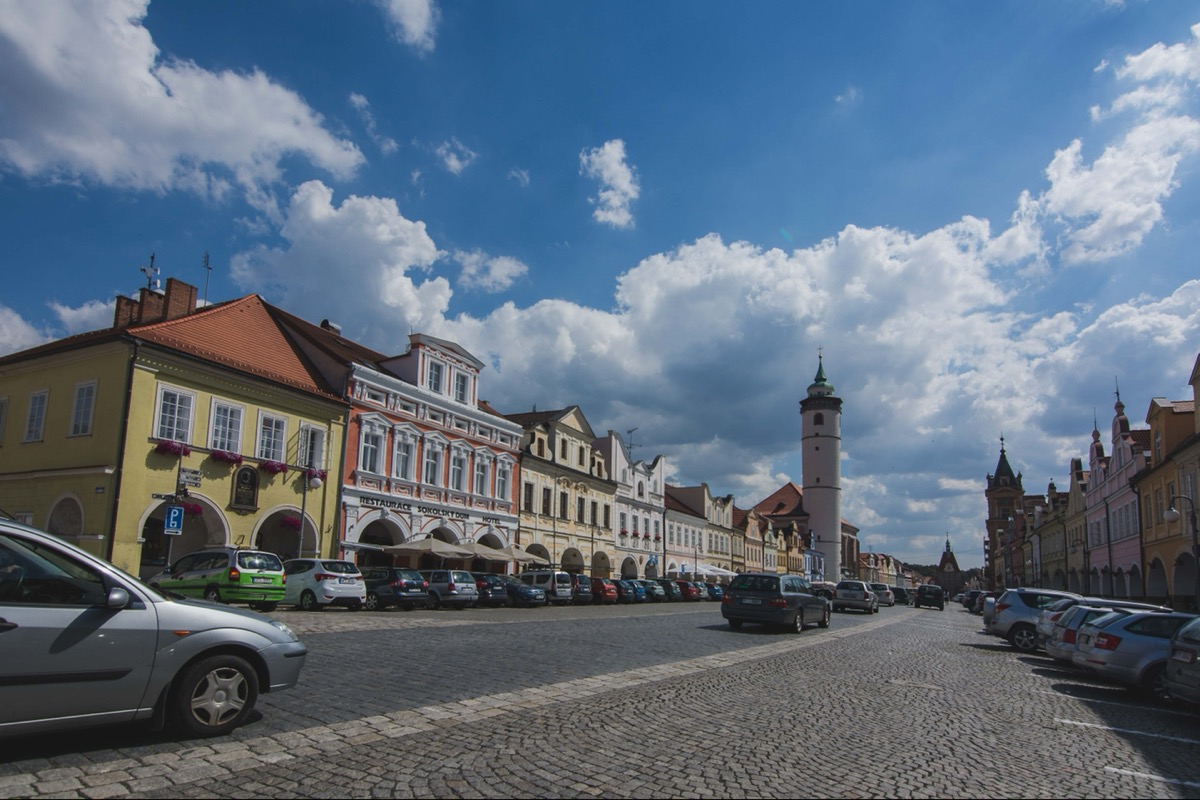 I don’t know if that or the NP Fiddler sign caused the unreal mood swing, but the result was great! Even though it was far enough home, I felt at home. Kepelské Zhůří, bike path to Prášil, Srní, Antýgl. These are places where everyone feels like they’re in paradise for a while. 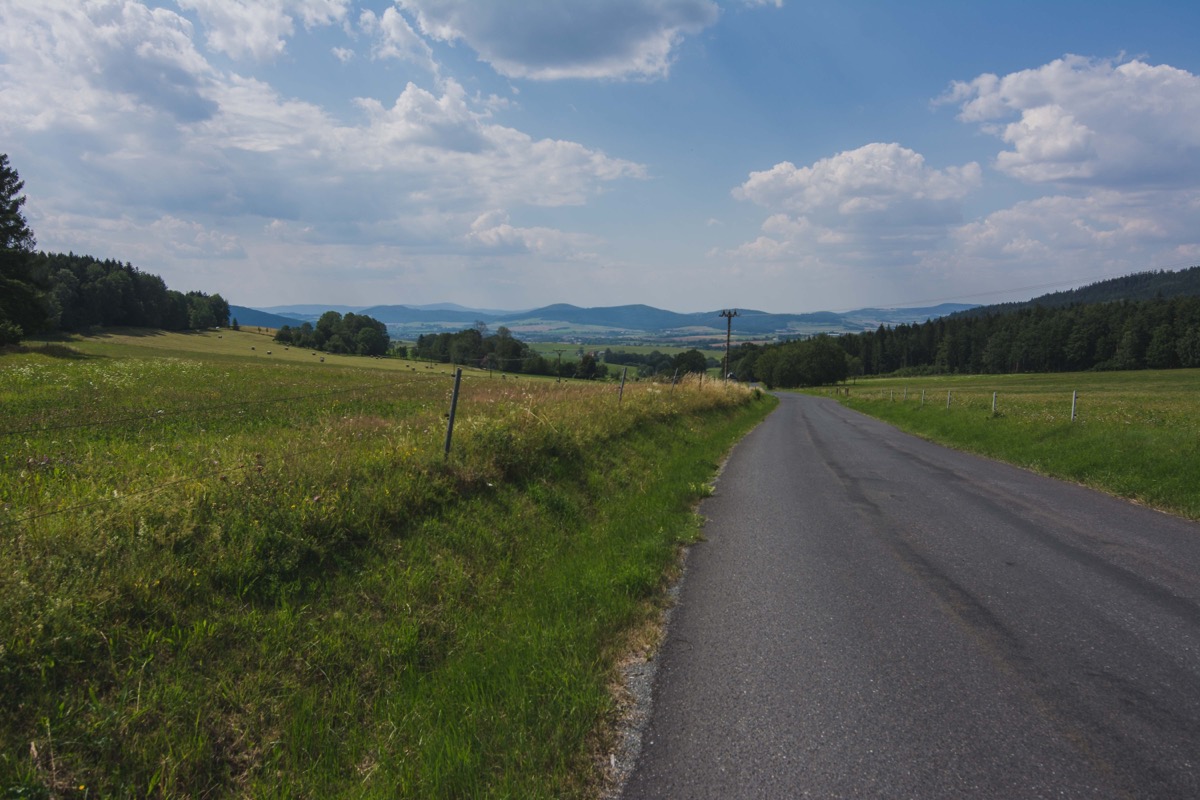 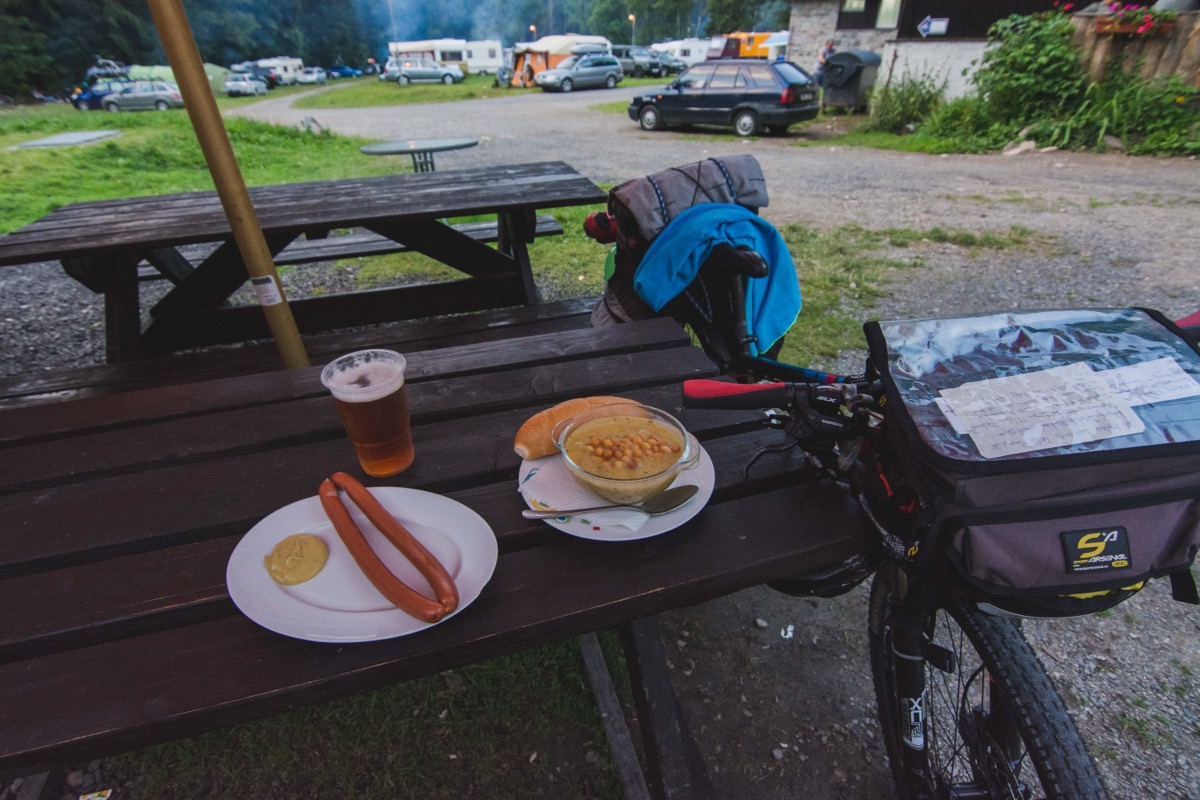 Since it is not allowed to sleep outside of emergency dormitories and campsites in Šumava (NP), I have decided to sleep in a campsite on Antýglu. The lady at the reception was more than nice, and so was a sausage of soup and beer. I’m not even going to talk about a hot shower. That was just awesome! Among the many tents and cars, I found a place for tonight. A bunch of people were tuning guitars near me. I didn’t even think of it, and I was already sitting with them, eating a nutcracker and singing trapeze pearls all over the valley of Flint and Otter. 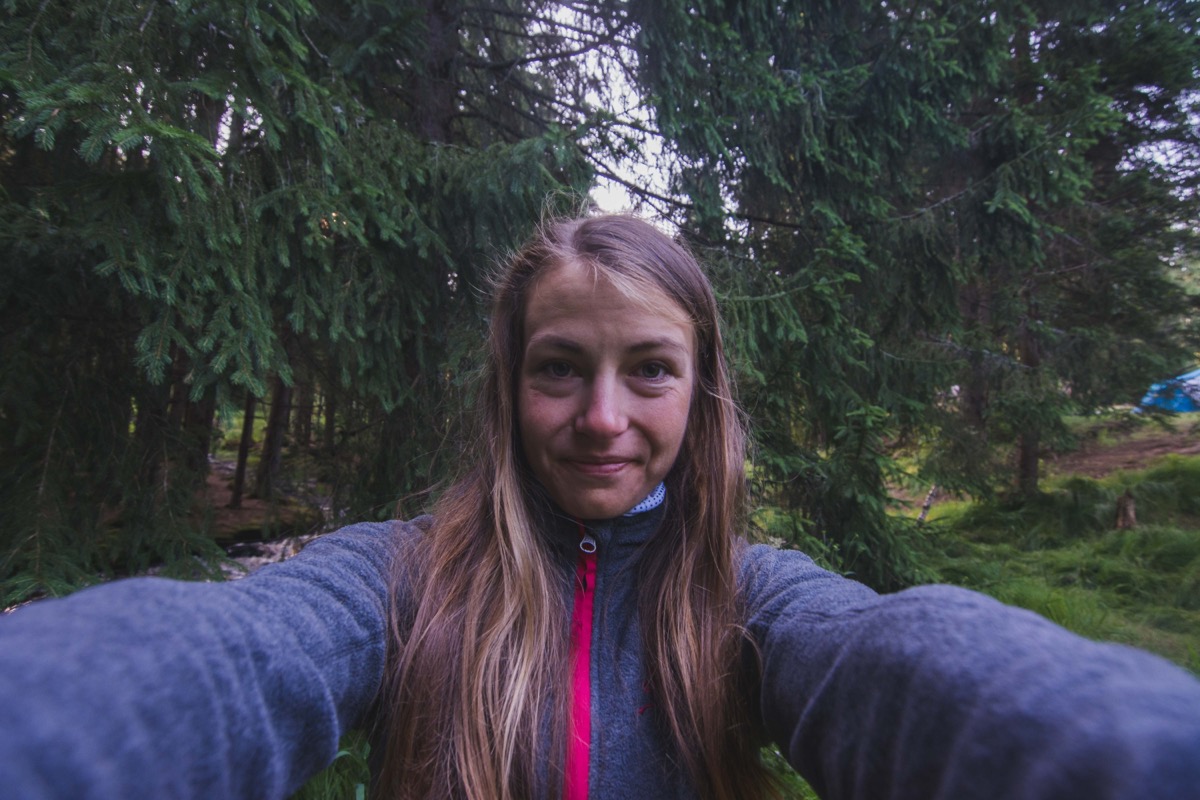 Morning swelter in Křemelná. On the 16th day, even the icy water didn’t help my swollen face. It’s like sleeping in a beehive. I drove through a sleeping campsite and headed to a bakery in Kvilda. With half a day’s food, the road took me all the way to Soumar Bridge. That wasn’t the plan, but I wouldn’t forgive myself for visiting a friend there who saved me once when I didn’t have a clipboard or anything in it. What a joy it was that he recognized me at once and invited me to sit down for coffee with homemade buns. We met for the second time in our lives, but I felt like we knew each other a long time ago, and she listened raptly to his tales of his adventures. I didn’t want to leave. With a promise to drop by again, and his recommendation for an excellent meal, I drove a little further to Good to the Germans. Blueberry dumplings and homemade lemonade. No more need to write. It was delicious. 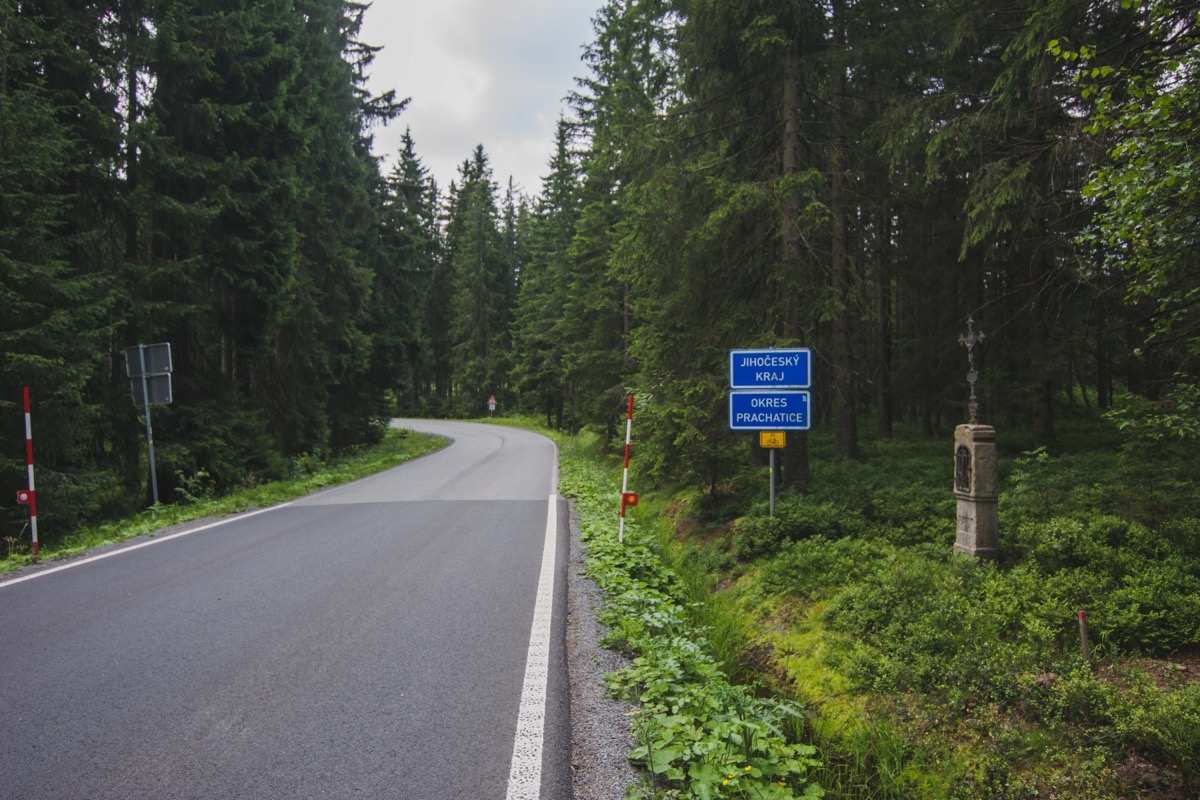 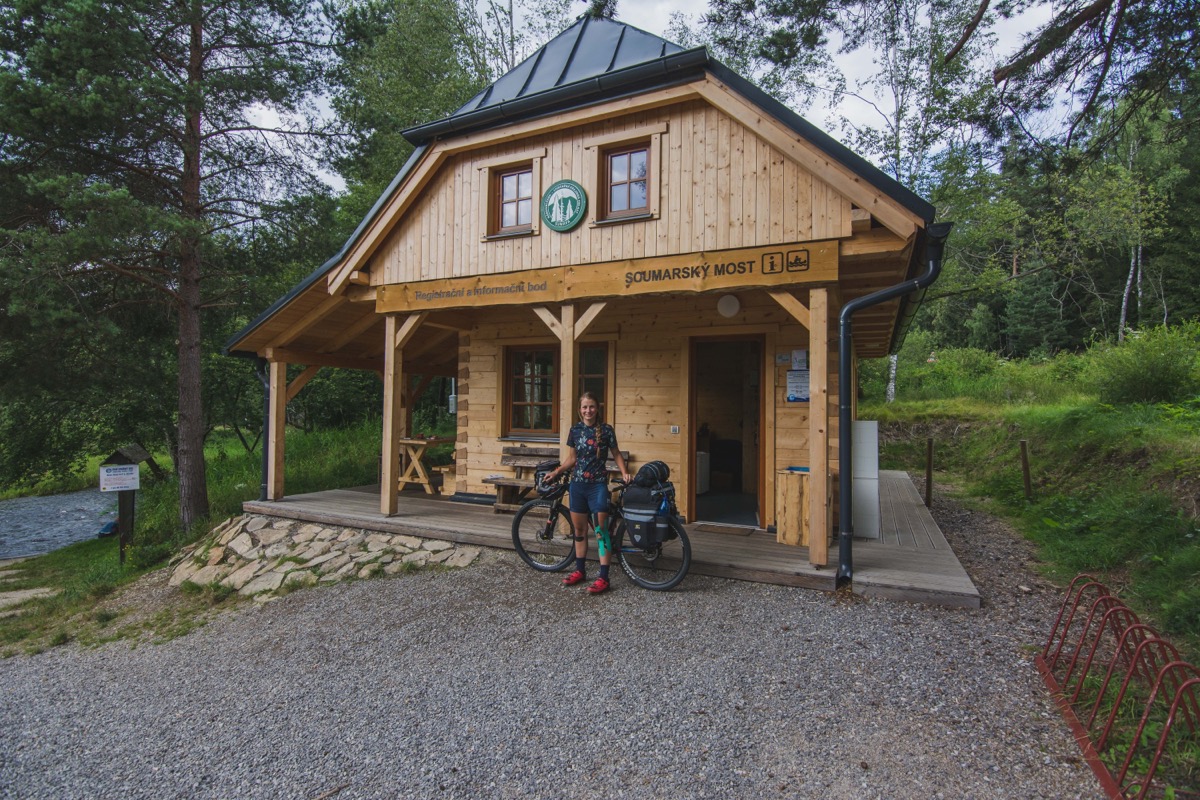 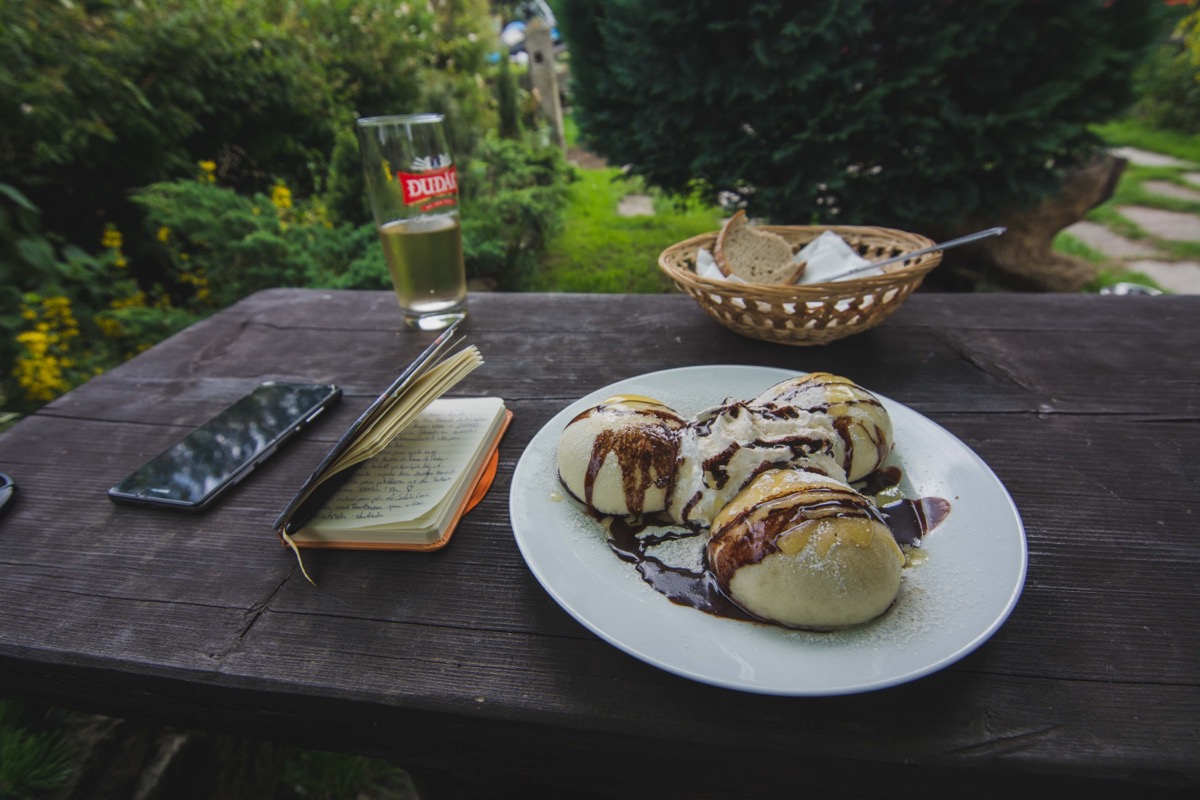 Passing the Dead Lump, meandering the Vltava, which seemed to take its last moment of freedom before being shackled to pieces by Lipno’s water tank, was a reward. I used to dream about moving to Fiddler’s then, and now I write about it from Fiddler’s. It’s beautiful when dreams come true.

There was a clear direction from Novaya Pec to Zadní Zvonkova. Get closer to the border before I get home. The back of Lipn was almost deserted until I ran into a family on wheels. My loaded bicycle was very impressive to men of all generations. My son, my dad and my grandpa. Only Mommy wasn’t thrilled with their new interest, and when she found out that Daddy was talking to the young chick instead of pushing her little thing up the hill, she was furious with the whole hill herself. After that, it was just Grandpa and me. He was my grandmother’s sausage. So he showed me how to overtake on an electric bike, as well as how to arrange the transportation of the whole family through Lipno. Smart grandpa. He apparently knew about his daughter-in-law’s “love” for bikes and wanted to keep their marriage alive even on a cycling holiday. A wise man!

It was the last night before me, and I wanted to spend it in High Fords, camping with the watermen. So I paid for the head and wheels in the meadow by the water 90,- and gave the last penny for the beer, only to find that without change I would not take a shower, and the talk of the so-called watermen did not appeal to my vacated mind. So I got on my bike and rode some distance to the river, where I know real watermen sleep. There I washed up nice in the river, pulling out my poncho tent for the first time so I wouldn’t have a wet sleeping bag in the morning and fall asleep to the sound of the Vltava.

The last morning was cold. There was moisture and cold from the river, so there was no reason to linger any longer. I had to text home every morning to say I was alive. This is where I decided to let you know at the southernmost point. The road wasn’t very long, it’s a stone’s throw from the High Reach. When I got there, I got a text from my brother saying he hadn’t gotten a report today. Smiling, I texted everyone home that I was back in the South and going home. With pleasure, but also a little sadness. I love it at home, but this Journey meant more to me than I could say or write now. 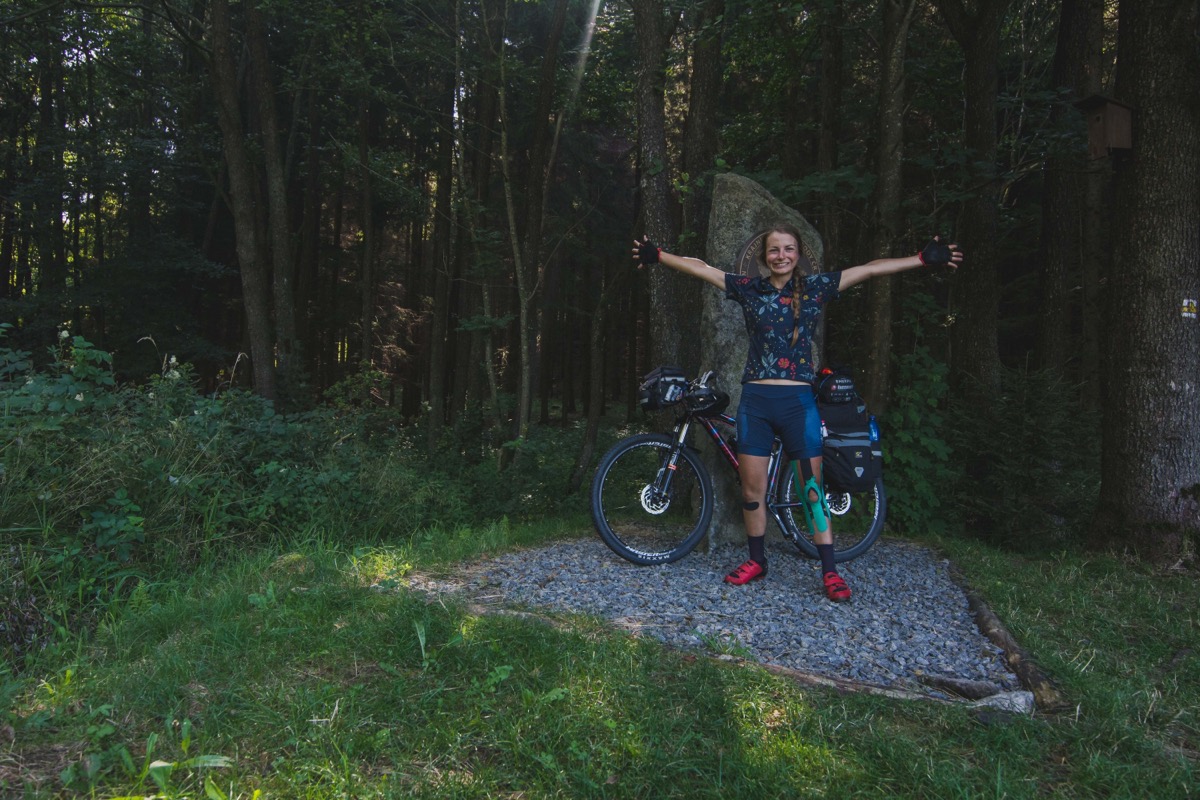 I don’t even need to describe how I kept going. By the land of the slightly forgotten, small but still wild Novohrad Mountains, I approached flat Třeboňsko mile by mile. The familiar landscape of ponds and rivers led me to where this Road began. I felt an incredible joy at the sight of Staňkovsky Pond, on whose surface the blue sky reflected. I rode through the camps, past the cabins into the woods back to Persian, to seal that I had just cycled round the republic.

In euphoria, I enjoyed the shade of the forest and the amazing feeling. Unreal feeling. Joy. Laughter. A feeling of bursting with happiness. Suddenly. Suddenly, someone’s calling me, “Libby!” What? Who is he? I don’t know him? But intoxicated, I stop and look at the young man who has ridden out of the woods where there is nothing. No trail, no sights, no road. Just out of the woods. I look wide-eyed for a moment when I recognize him as a Fandu I met just before The Road. He happened to be on his way to see the Persian for a tourist stamp collection, and up in the woods, he said, he was looking for a view (where there is nothing to see but the woods). After the question of when I’m going on that trip around the border, I have to laugh. “I just got back and I’m going out for a beer before Daddy picks me up.” 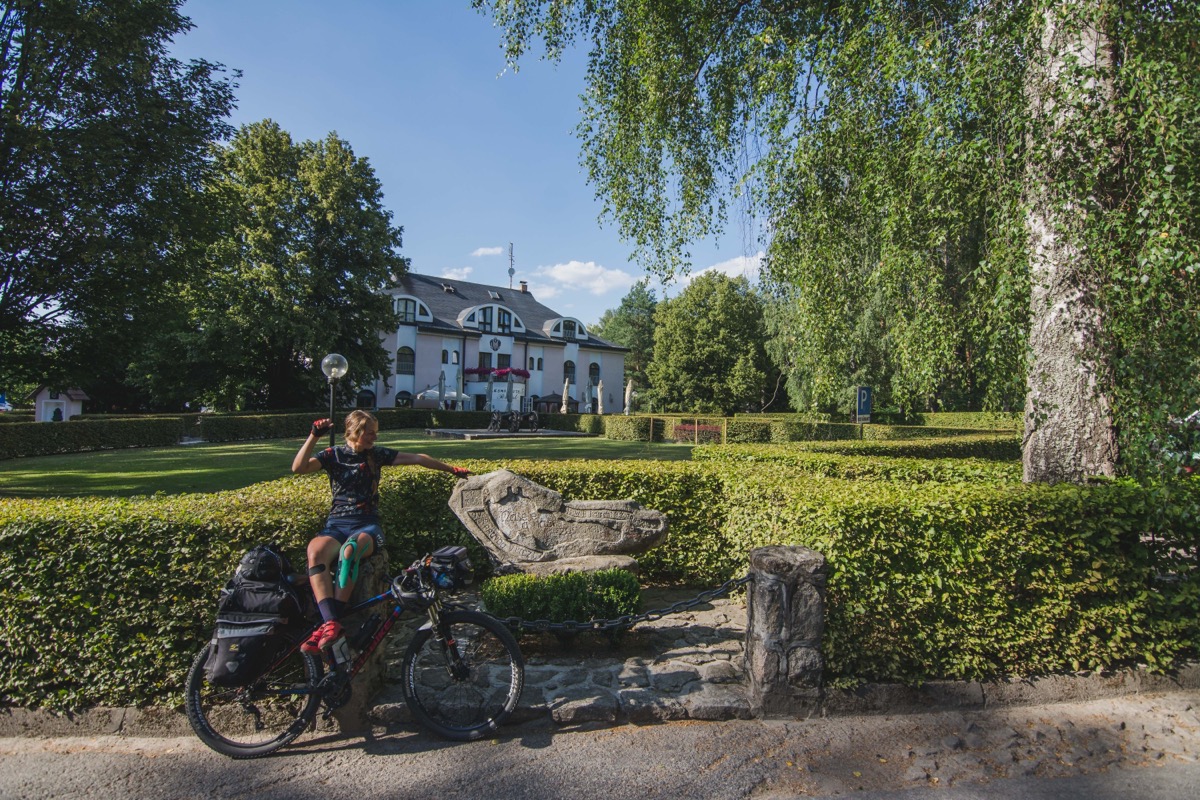 So we drove the few miles together. I was invited for beer and soup, and they waited in cheerful conversation for my ride. Another photo by the rock of the republic, a firm hug with daddy, and hurry home. I’ll miss you Journey. We spent 17 days and 1903 kilometers together.

Before going out, I was curious to see what goes through a man’s mind when he’s been riding alone this long. But I can’t say that I already know for sure, and that I won’t need more and longer journeys to answer that question. Maybe that’s the magic that makes people go or go further and further. And once you’re hooked, there’s no other way. Beautiful self-discovery on all roads.