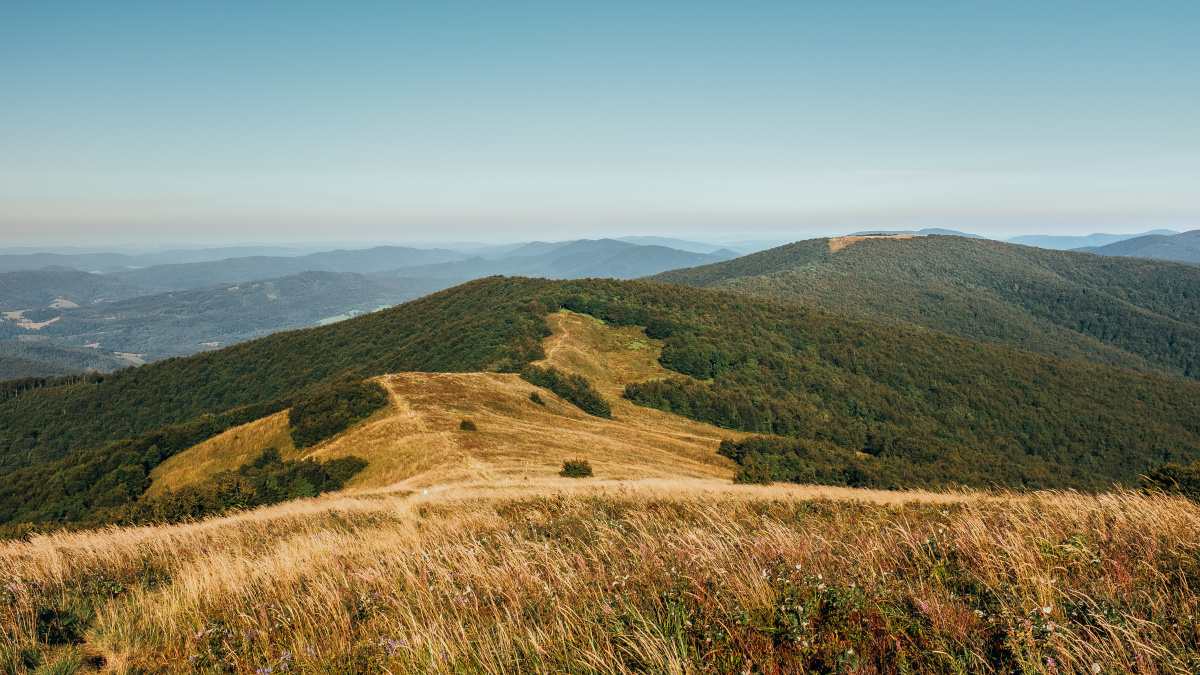 Ridge route through the Poloniny mountains

The route through Slovak polonins had been in my head for a long time. It was the sort of back-up plan I could always reach for when there was nowhere else to go. And that's exactly why it came to him at the end of the summer. Because virtually everything I've planned this year has hit a wall. So when I suspected at the beginning of September that it would not be long before Slovakia closed to us, I reached into the archives for the Polonins, checked the weather, and set off without a second thought.

The route through Slovak polonins had been in my head for a long time. It was the sort of back-up plan I could always reach for when there was nowhere else to go. And that's exactly why it came to him at the end of the summer. Because virtually everything I've planned this year has hit a wall. So when I suspected at the beginning of September that it would not be long before Slovakia closed to us, I reached into the archives for the Polonins, checked the weather, and set off without a second thought. 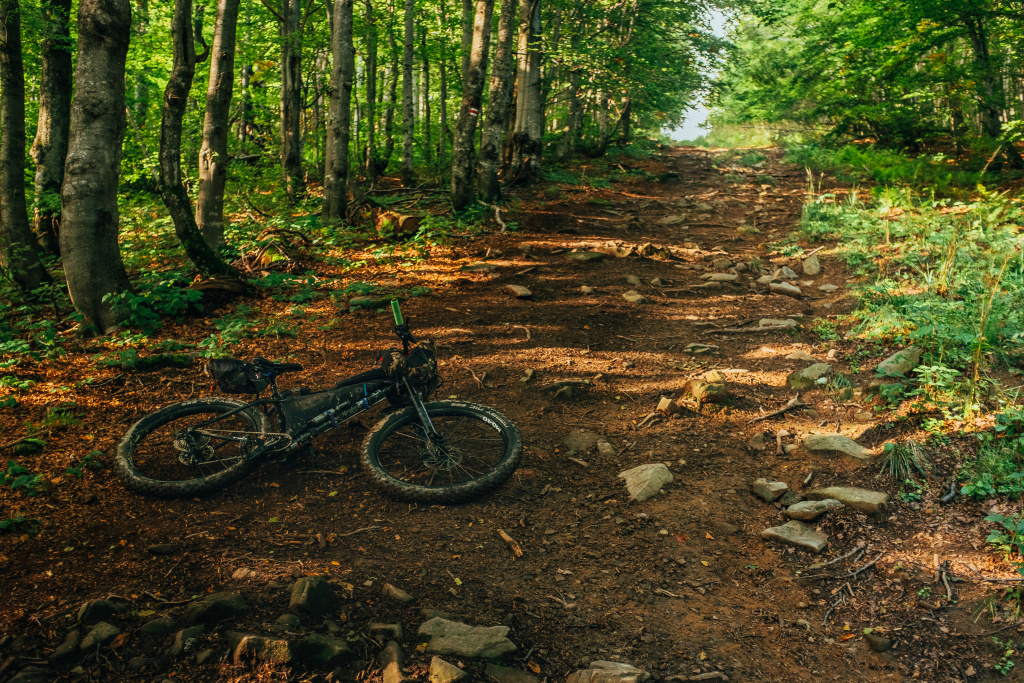 The overnight train journey to the east of Slovakia was long, tedious and long again. Next time I have to choose a different carrier. When I fell crumpled from the train after about 14 hours, I couldn’t wait to get out in the fresh air. The first few miles from the station in Stackčín literally reeked of nostalgia. Six years ago, I cycled through here for the first time during my cycletrip to Japan. I was about to make my first crossing into Ukraine and thus my first step into the unknown. I immediately recalled a story about how a Slovakian television network had come to film me, and they had finished me off in the biggest tavern around the Starina water tank. I don’t think this is how desperate they imagined a fearless adventurer. The second time was a slightly different story. My bicycle was 30 kilos lighter and my strength was also significantly higher, so the tarmac shift under the mountains to Nova Sedlica pretty much escaped. Although, to be honest, I was so engrossed in the route planning that I somehow forgot to factor this 40-kilometre road into the route. 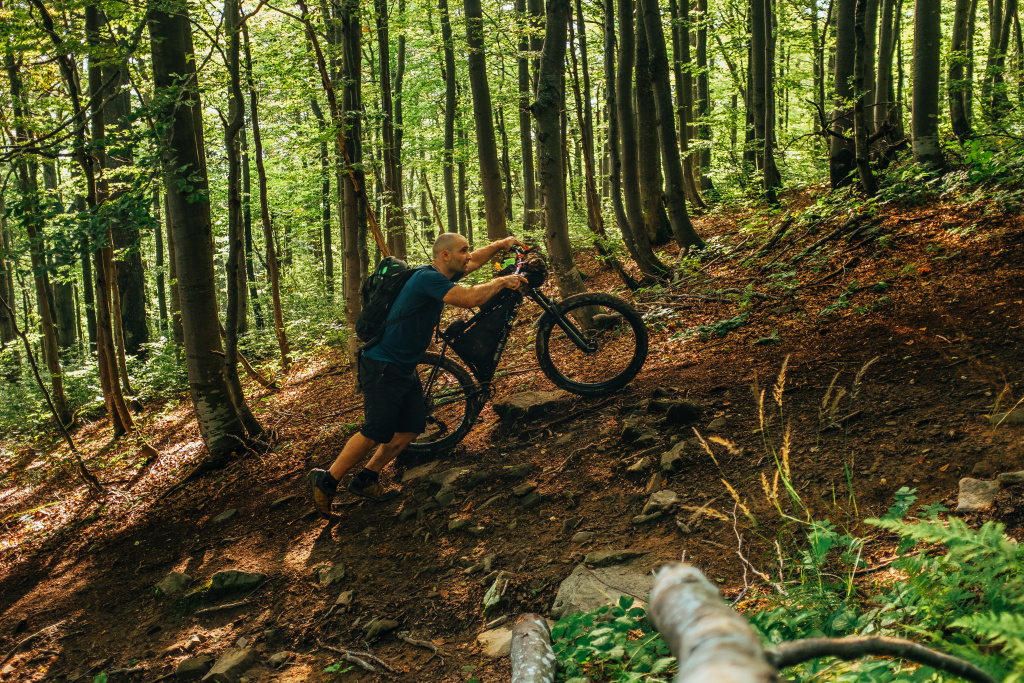 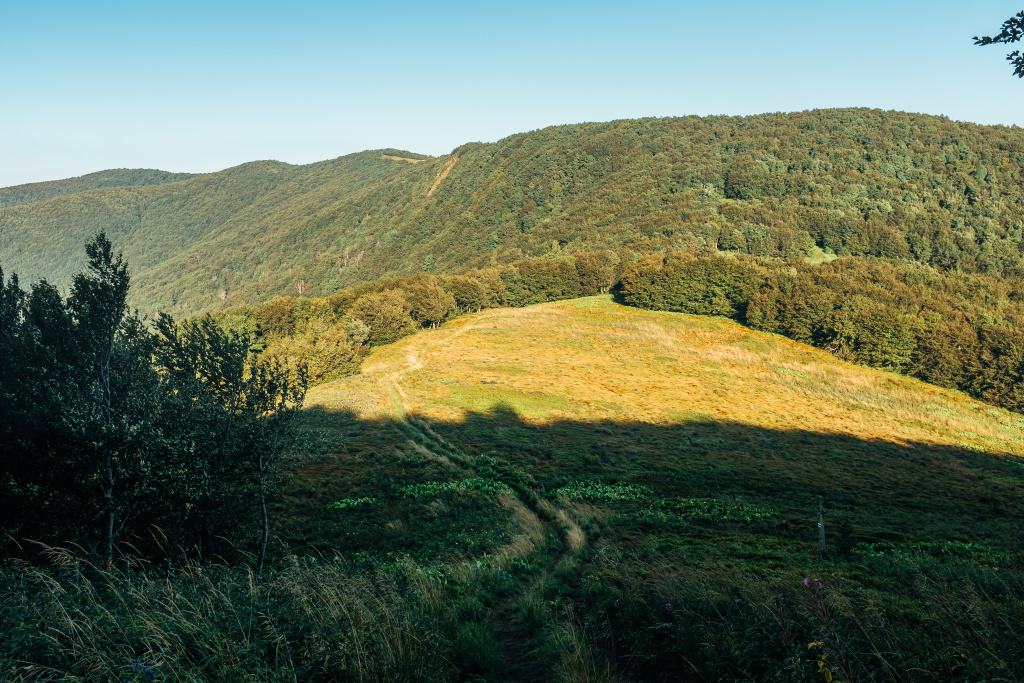 The new Sedlica is a popular starting point for Poloniny, or if you want to go to Bukovské vrchy. On the triple limit of SK/PL/UA as well as the highest mountain of Slovak Polonin Kremenc, it is about 9km (4h walk) from here. That wouldn’t be a bad thing, but there’s less than a kilometre to climb on those few kilometres, and you can already tell. I trod out the first part of the ascent of the Dark Surge (Temný vršok) with surprising ease. There was a short, playful descent to the creek. Ehh..,how these height losses are unnecessary in these passages. With that in mind, one does not even enjoy the fun ride effortlessly. Then there was nothing left to do but grab the handlebars and push for the top. The path climbs through the enchanted forest. Old beeches grow to the sky here, and the forest takes on a life of its own.

Sweat-drenched, I climbed over Kremenec and continued on to the Polish side. My plan was to climb the ridge about 20km to the east. And this was possible only by crossing the Kremenec and then crossing the Polish foothills because of the closed Ukrainian border. But at this point, I had to rethink the plan. A little below the peak of Welk Rawk, where the Polish border of Ukraine passes, by which I intended to arrive at the same spot the coming day, I could not find the path that would take me there. The map offered no reasonable alternative, so I turned back to Kremenec and headed straight west along the Polonin ridge from the top. In the evening light, the descent along the ridge was literally a balm on the soul. Even on the thighs. I stopped at Sedlo pod Čierťažou, where there is a large Polish shelter, a Slovak snug, but above all there is a well on which I relied. On the one hand, I was unpleasantly surprised by the packed bags of garbage propped against the snug, but on the other hand, I was reassured because it suggested that, contrary to expectations, there would be no bears. 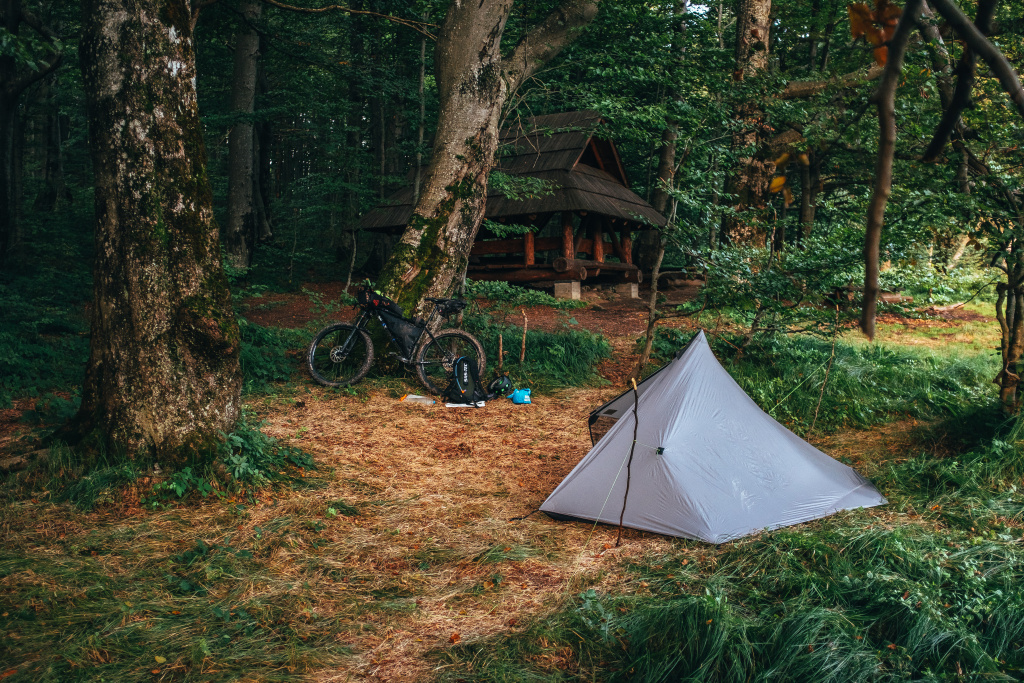 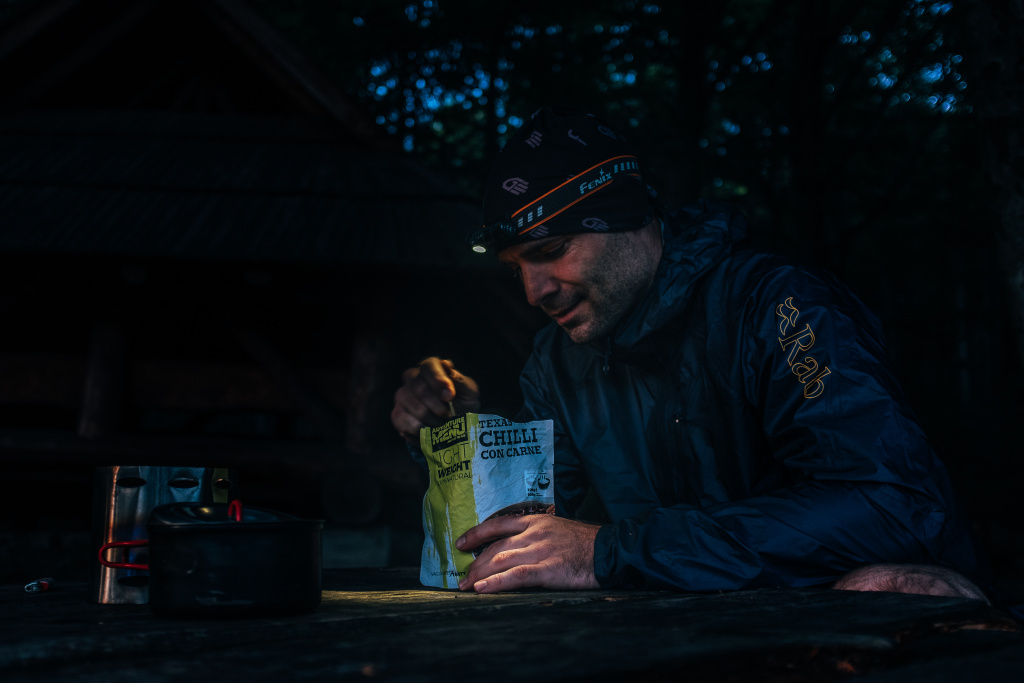 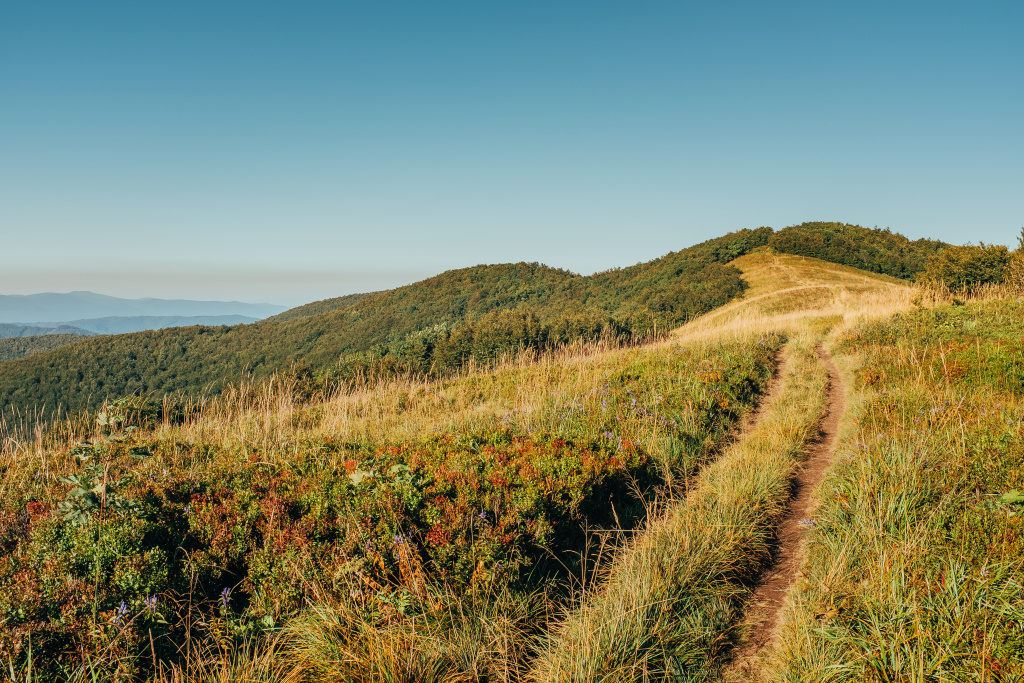 Moving a stiff body in the morning was a bit of a test of willpower. The climb to the ridge had a much stronger effect on me than the evening had seemed. By a lot. In order to cover some reasonable distance in challenging terrain, I had a plan to get up at 6:00, start at 7:00, stop at 7:00, so there was no room for excuses. The first steps were hard. It’s like I didn’t plug my feet into my charger overnight. I’m writing steps because I went into push mode soon after I got back on the route. What better way to stretch your legs than a nice morning stroll, right? While I was comfortable with the wide path in these passages, I must also mention some disappointment. I was looking forward to a scalloped singletrack along the boundary markers, but instead there’s a wide four-wheel drive down the boundary. My process followed the textbook example of a “hike a bike.” Or as we say in Czech, show-stopping “biketreking.” When I reached the Jaraba rock, I was at least rewarded with a breathtaking view of the country. Until now, there had been little to see from the surrounding mountains. From Jarabá Rock (Jarabá skála) to Ďurovec there is a path along a deforested ridge and that is where you want to be. The red hats of the borderline stalks protrude from the tall grass, the bare ridges of Bieszad are visible to the right, the whole foothills of Polonin to the left, and there is no sign of anyone. That’s exactly it. I had all this beauty to myself, and suddenly the weariness was gone. With a bun on my mouth, I took the plunge off Ďurovec and continued along the ridge, pushing up in style, not braking down. A few summits away, I managed to make one gross mistake. I didn’t check the route and fork on the Okraglik, and took the beaten red mark for sure. Three peaks and saddles later, I found myself taking a three-mile detour to Poland… To make a 6km detour in this terrain is to be excluded from the trip. I wouldn’t want you to hear that machine gun of profanity wafting through the woods. With an hour’s delay, after an ultra-steep descent, I stopped in the Russian Saddle (Ruské sedlo)for lunch, rest, tarp drying, etc. 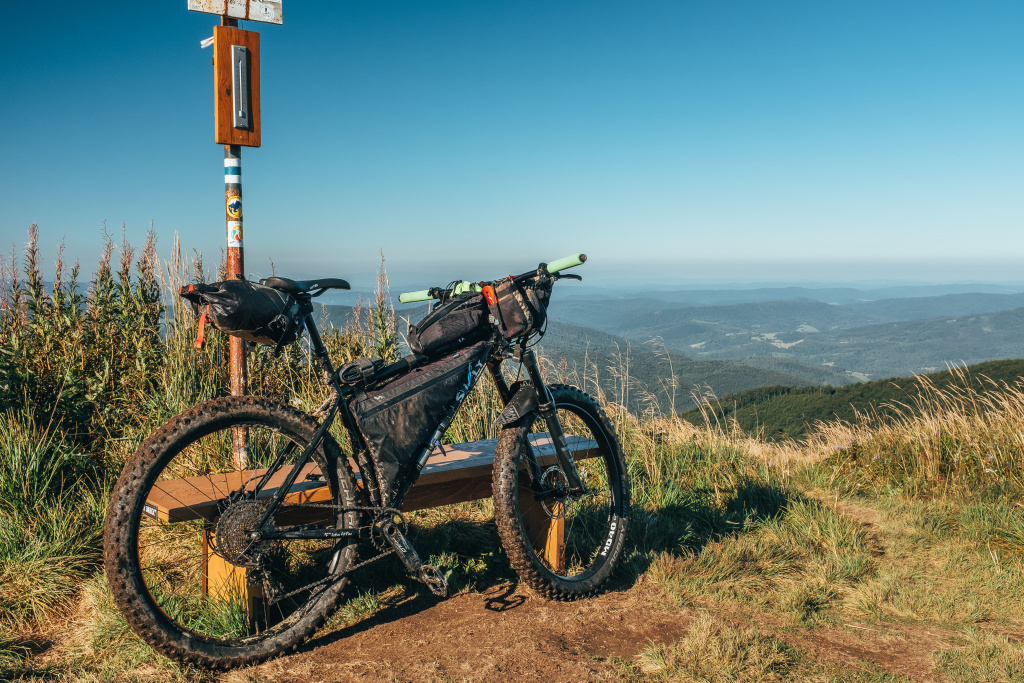 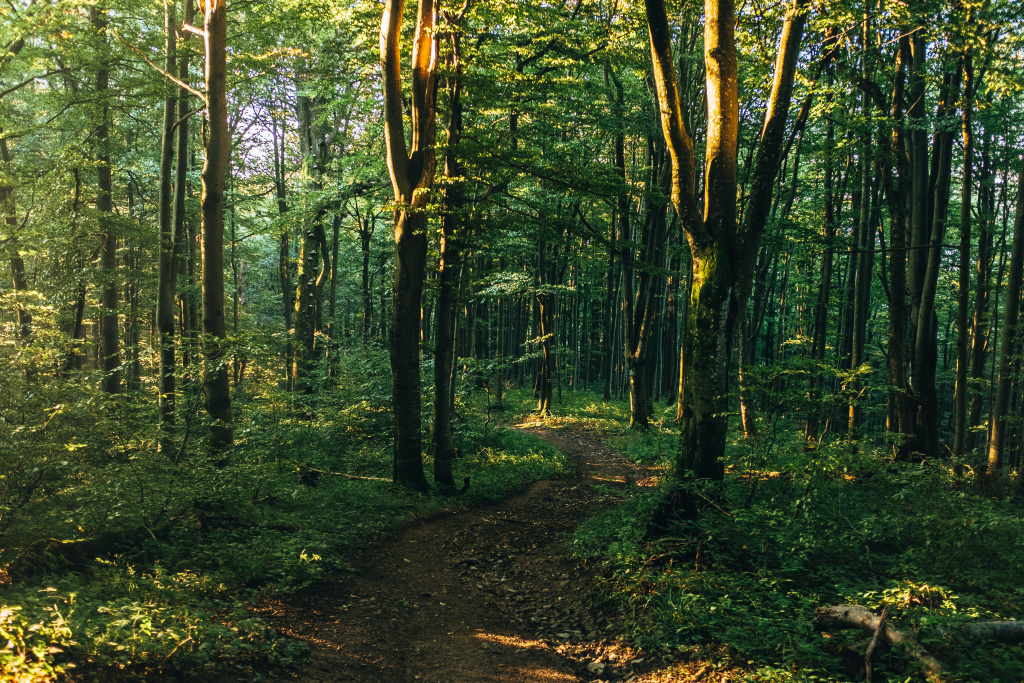 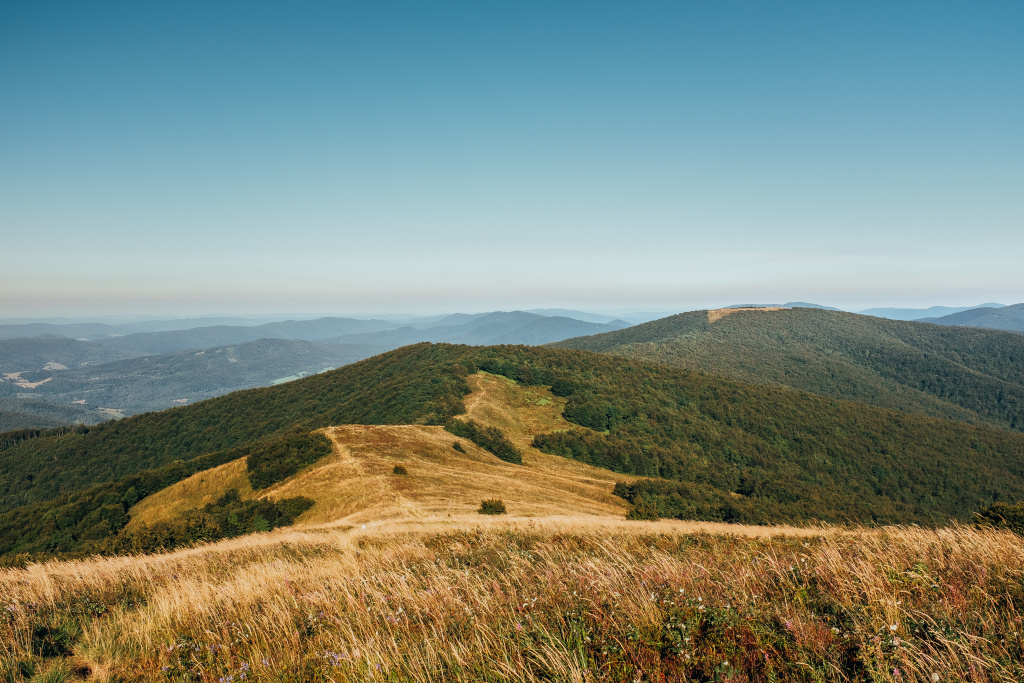 There was nothing left of the Russian saddle (Ruské sedlo) but to grab the handlebars and walk along the border to the top of Rypa. This section, the Russian Saddle-Balnica is, to my mind, the best cut of the entire ridge. I’d like to do that again. After climbing the first peak, the trail has a total flow, the descents are gradual and, most of the time, it follows a narrow path. Compared to the Kremenec-Ruské sedlo section, where brakes are either pressed or fired, the Balnice section is a great mountain biking. The Balnica is one log at the Polish bottleneck stop and the only shop and snack bar on the ridge. By business, you mean soda, beer, biscuits, nuts, and under refreshments, pasties and soup. Just sitting on the porch were two Czechs with beers, contemplating their huge rafters. “Hey, guys. Hey, where you coming from? From Kremenec. What? The whole comb after the red? That’s right. That’s bullshit, right? Yeah, I think that’s pretty stupid, but the finish here was awesome. How long have you been going? Since yesterday afternoon, and you? We’re going on the third day.” And it went on like that for quite some time. A homemade bean has restored my appetite for eating and living after chocolates and dried food. 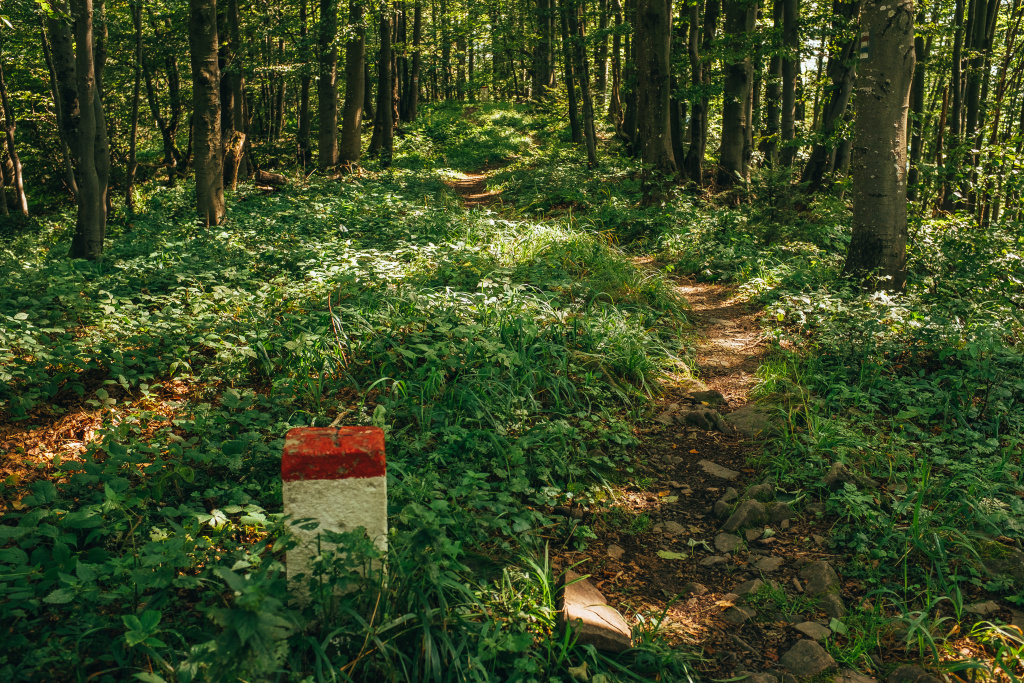 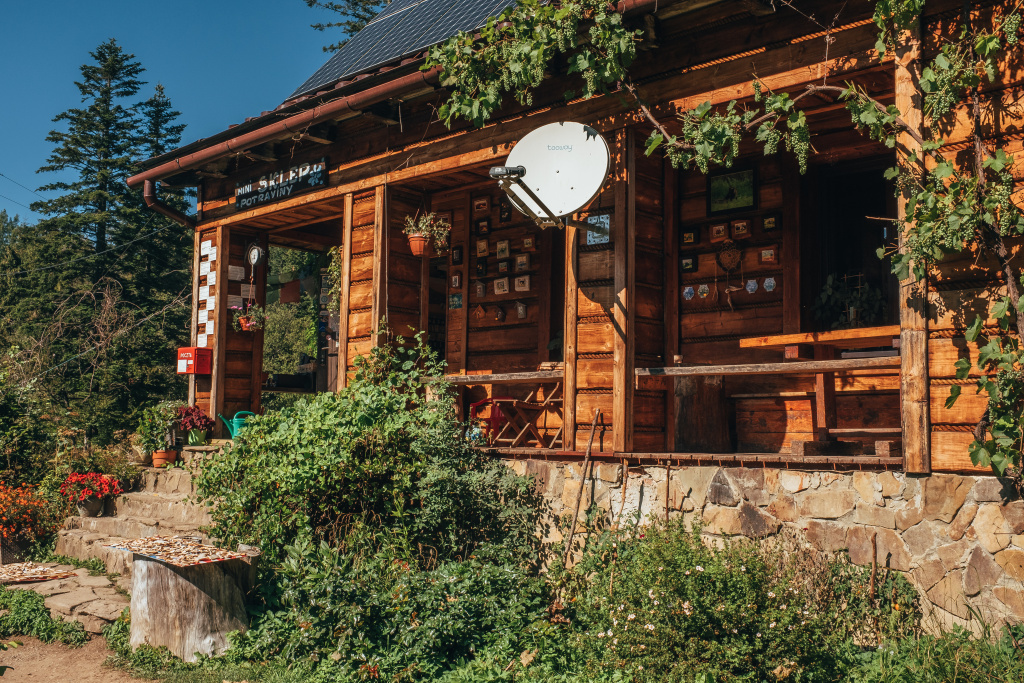 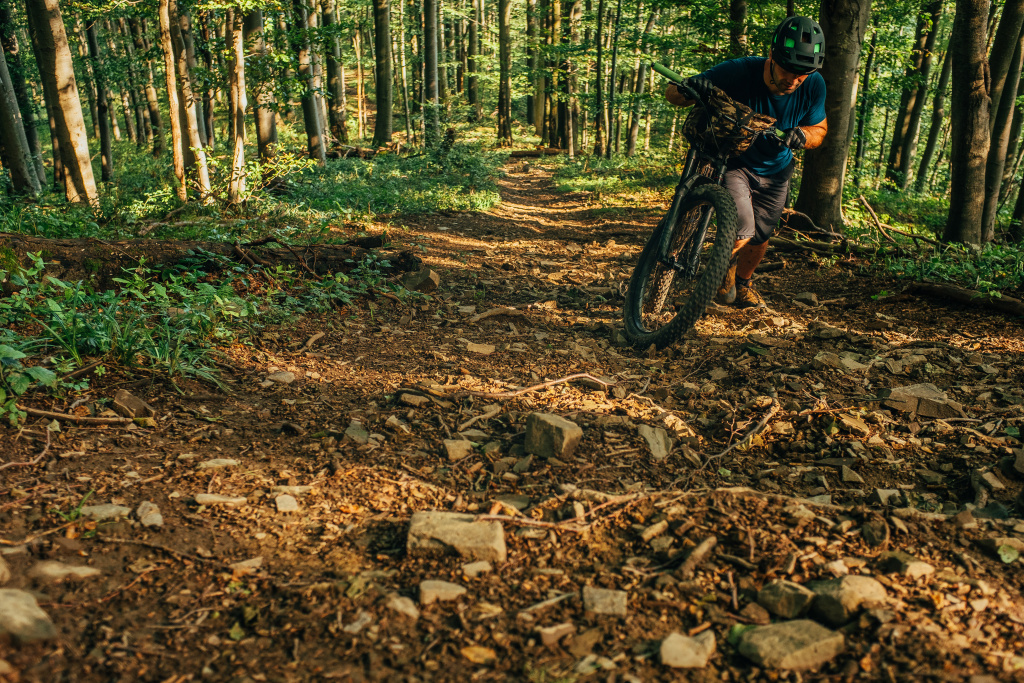 Beyond Balnica, the ridge remains below the 1000m mark. Definitely gripped by the forest, his profile becomes a hair friendlier. Even so, well-trodden walking boots are in place. It’s necessary to take on water at the Balnica, because on the next stretch to the Lupkov Pass, I didn’t find any source. The night-time slot in the pass was occupied by a bunch of bric-a-brac, so after a courtesy shot of homemade brandy, I went a few hundred yards down the route and built the tarp in the first dry spot. For two days the sun had been shining, this place was quite wet, and the road was heavily waterlogged. Not to mention mud-filled troughs. My route didn’t have a clear conclusion. I knew I wanted to reach the Dukla lookout and the Dukel Pass (Dukelský průsmyk). The next course hung in the air. But the last part of the ridge to the Dukla was no longer very special. The forest road, like any other, wound through the woods, sometimes uphill, sometimes downhill, and much more than that, revealing impassable lagoons and mud troughs. That’s why I left the ridge behind Dukla and headed down to the train. 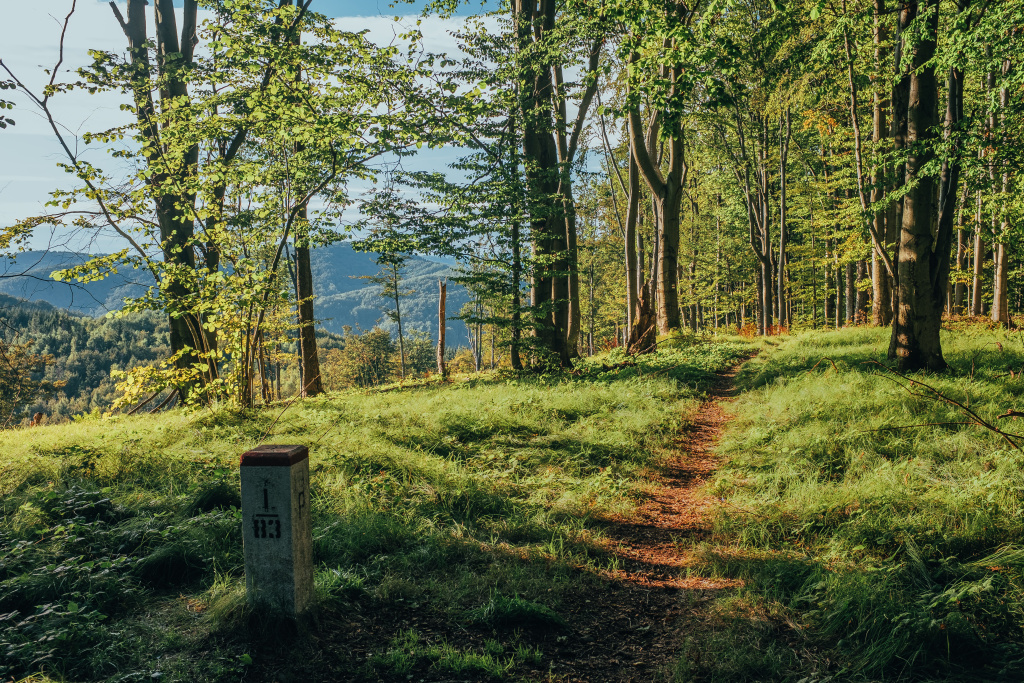 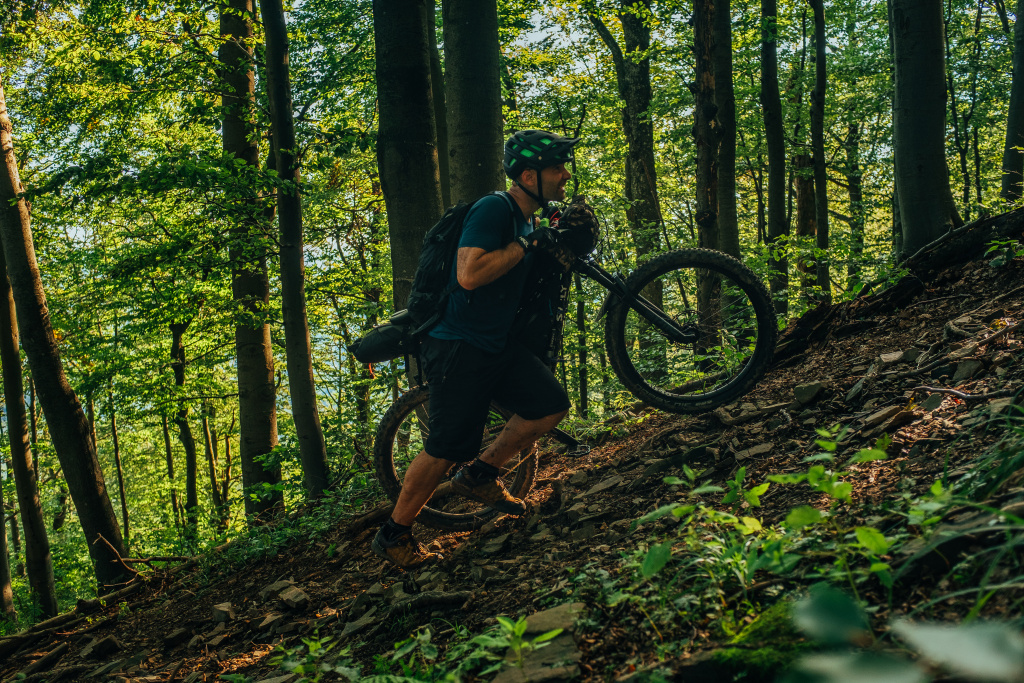 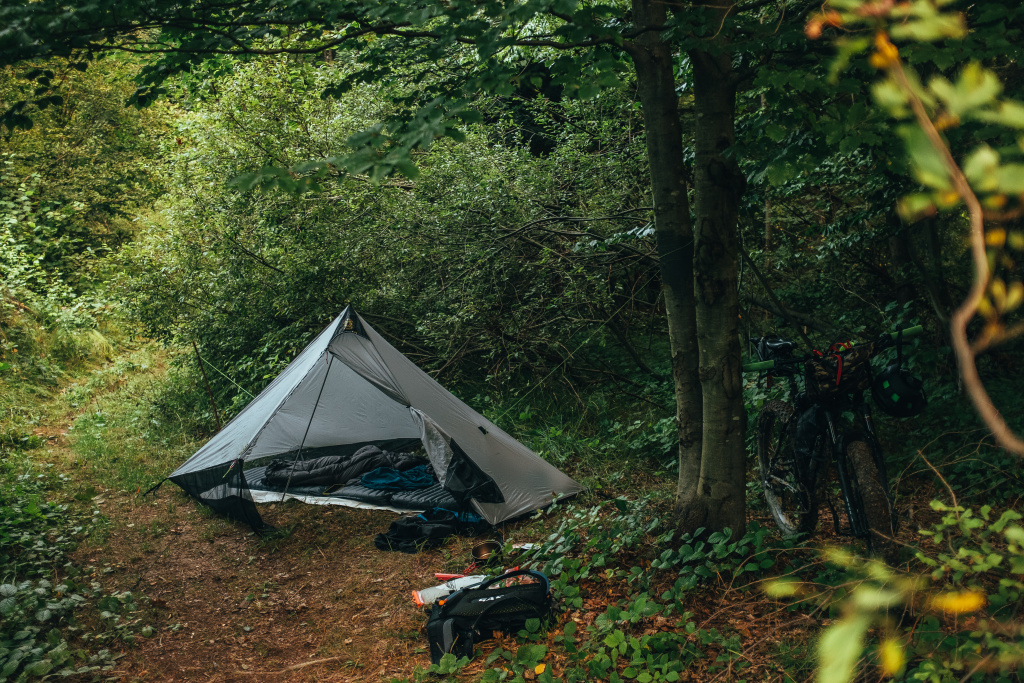 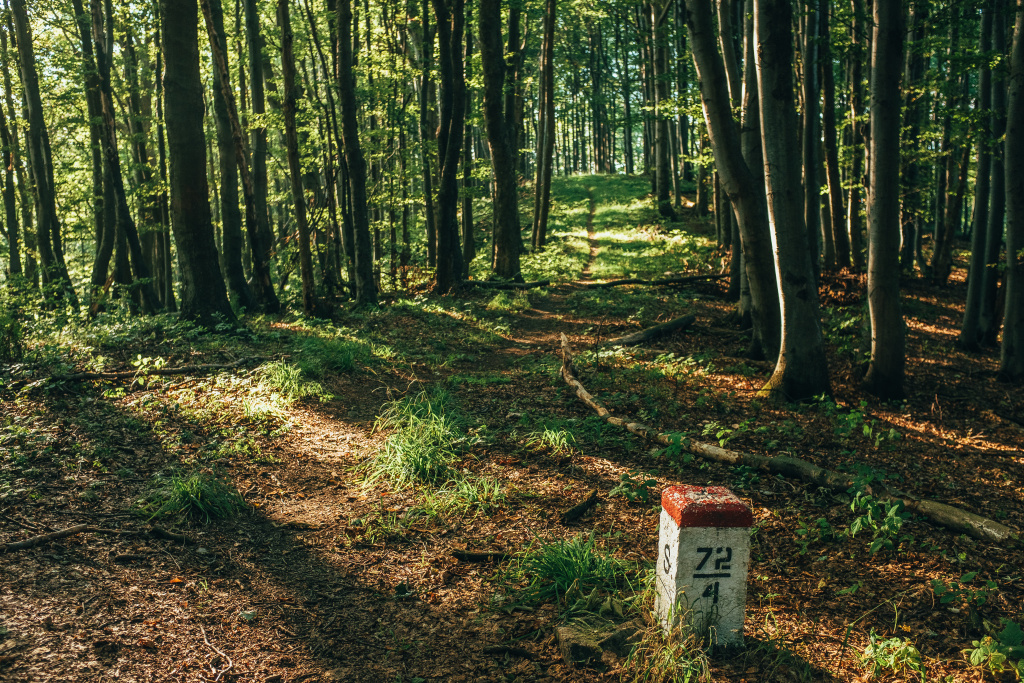 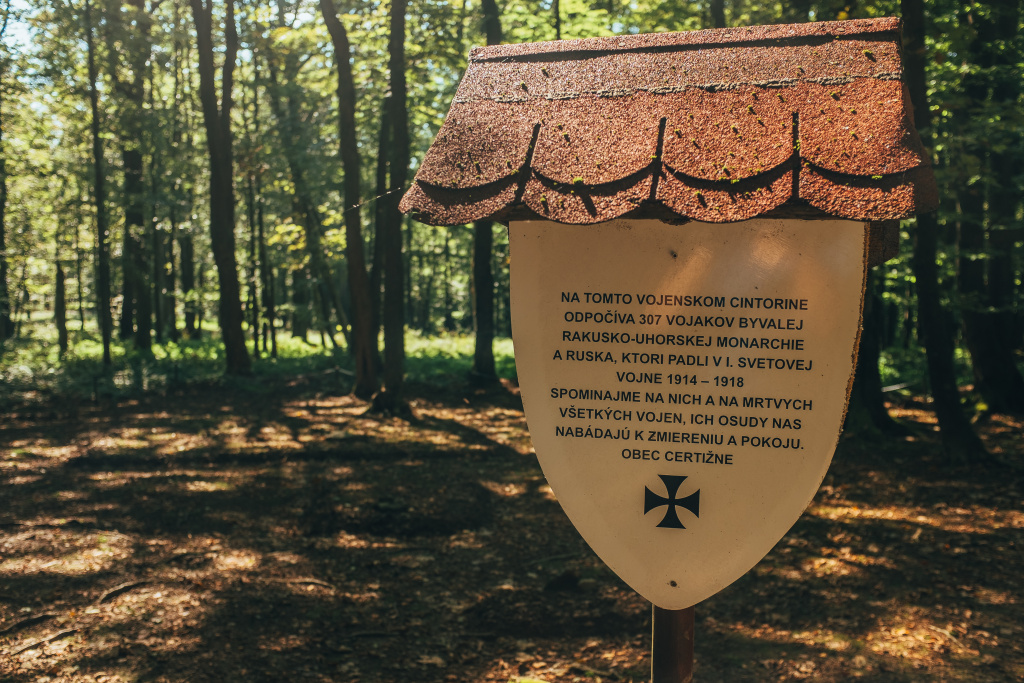 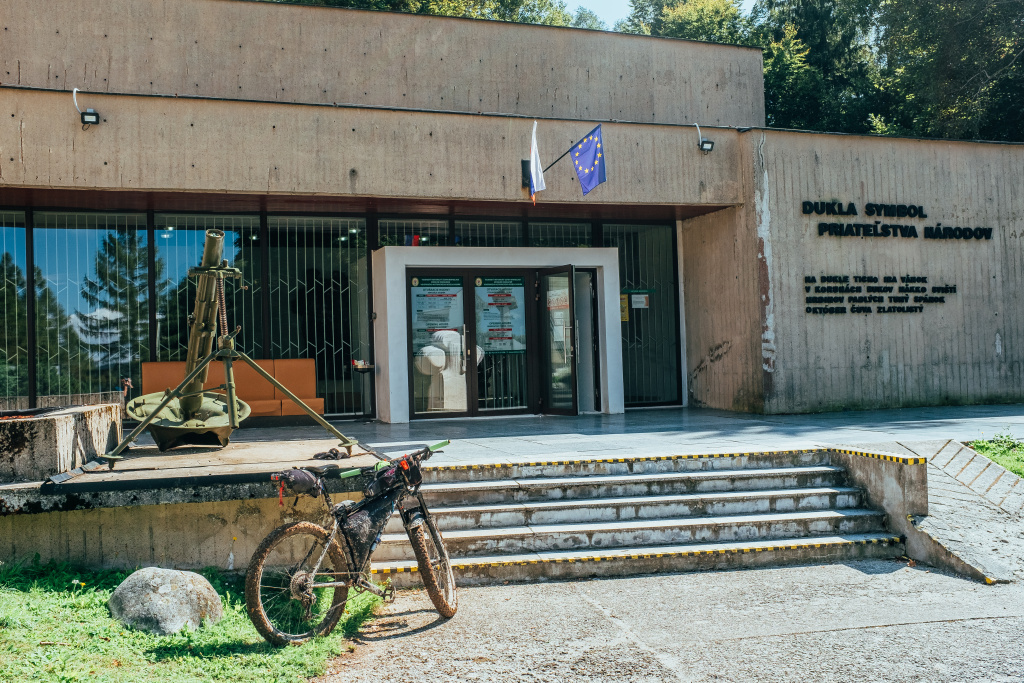 This ridge route was truly jaded and required no small amount of conviction beyond excellent fitness. But I kind of needed to go through something very challenging, where I’d get the best out of myself, and she delivered to the letter. In fact, I don’t even know if I’d recommend this route. There are virtually no views of the country, it walks almost as much as it drives, and sometimes it can be difficult to find water. So what am I talking about, this is a great route, isn’t it? 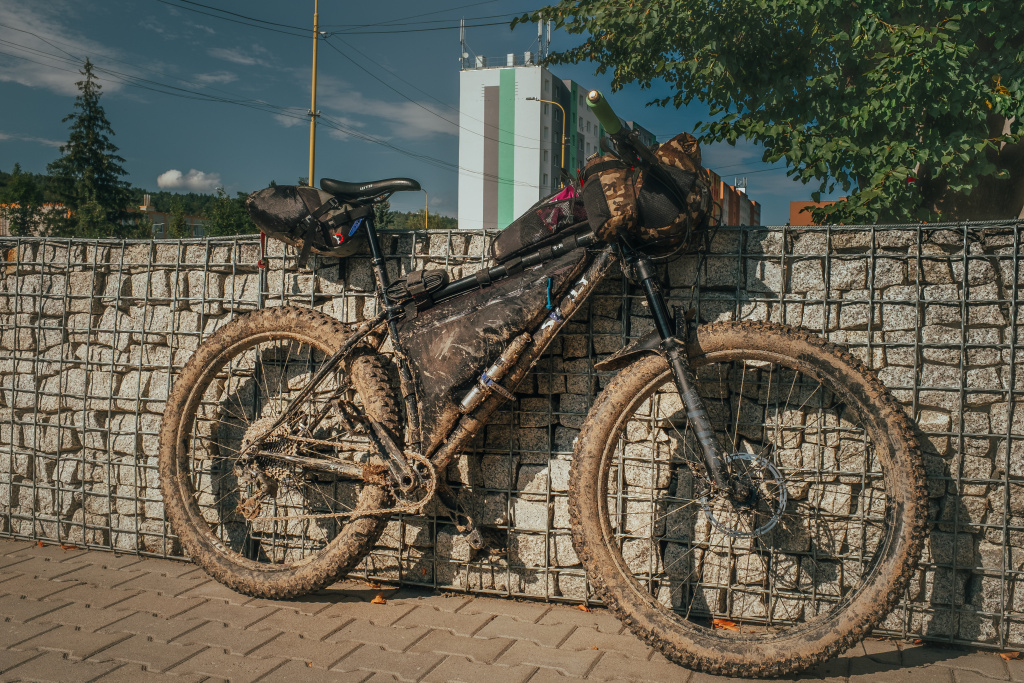 SHARE
support:
Cycle Route 7492780 - via Bikemap.net - Open Route in Bikemap App
if you are already a registered user login , if you are not registered yet, you can Registration or respond as an unlogged user.