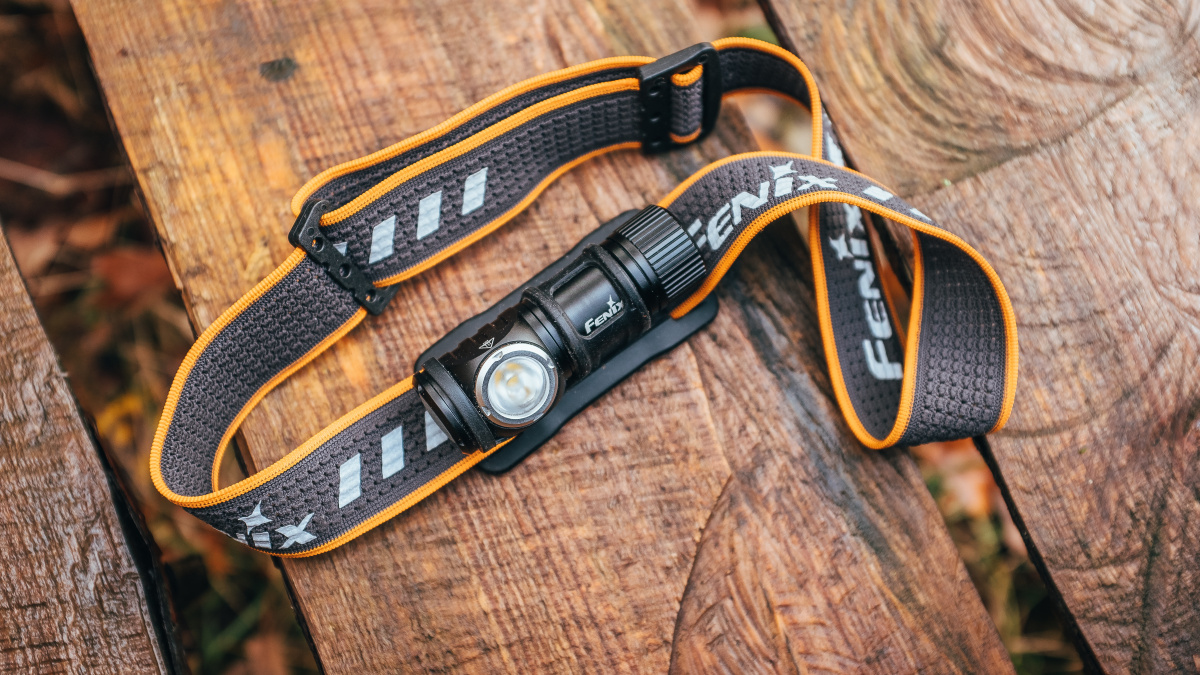 Autumn has cut our days inexorably short again, and it's probably time to look at some light. Don't cheer prematurely, because I haven't reached the stage of getting a regular cyclluminaire on my handlebars. Riding in my nightgown, with nothing to see but the beam of light, does not impress me. That's why I'm still making do with a light headlamp, and that's what we'll be talking about.

Autumn has cut our days inexorably short again, and it's probably time to look at some light. Don't cheer prematurely, because I haven't reached the stage of getting a regular cyclluminaire on my handlebars. Riding in my nightgown, with nothing to see but the beam of light, does not impress me. That's why I'm still making do with a light headlamp, and that's what we'll be talking about.
A good headlamp is an integral part of the bikepacking kit. But while I make do with a miniature lantern in the summer, as it tends to be visible until late, in the autumn it takes something stronger. The Fenix HM51R Ruby looked promising. With a maximum output of 500 lumens, it’s no longer a miniature headlamp using around the camp, but a regulent light to be reckoned with. However, it still retains very compact dimensions and a pleasant weight of 82 grams (weighted). 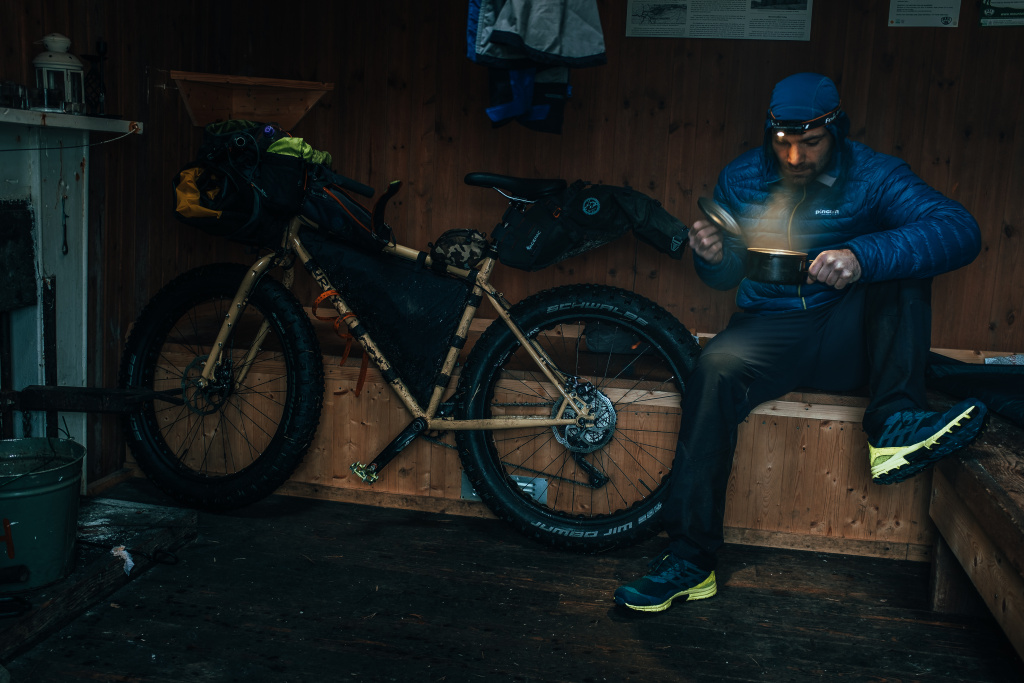 What really excited me from the first moment was the design of the headlamp, which makes it seem immortal. The lantern itself is made of airborne aluminium and is shaped like a cylinder measuring approximately 23x70mm. This is simply inserted into a silicone holder in which it can rotate through 360°. A brilliant solution for me, because a pair of glowing headbands with a broken tilt pin are rolling in my drawer. You can walk on this one and nothing will happen. With a robust all-metal structure and a screw-on battery cap, the lamp meets IP68. It is therefore watertight until 2m underwater. That may come in handy on my bikerafting trips. 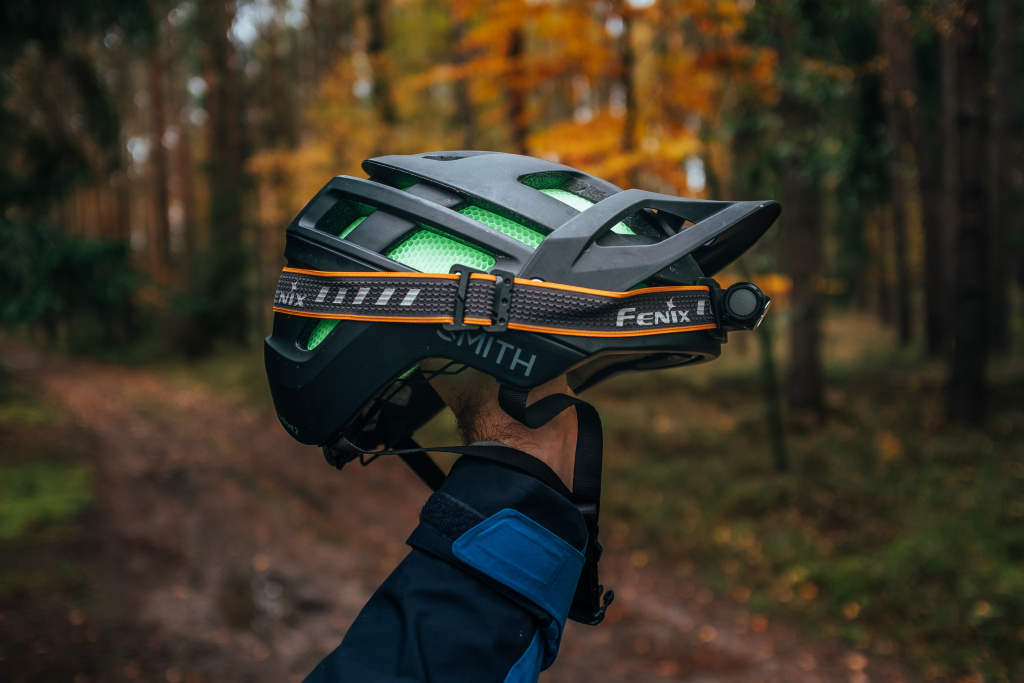 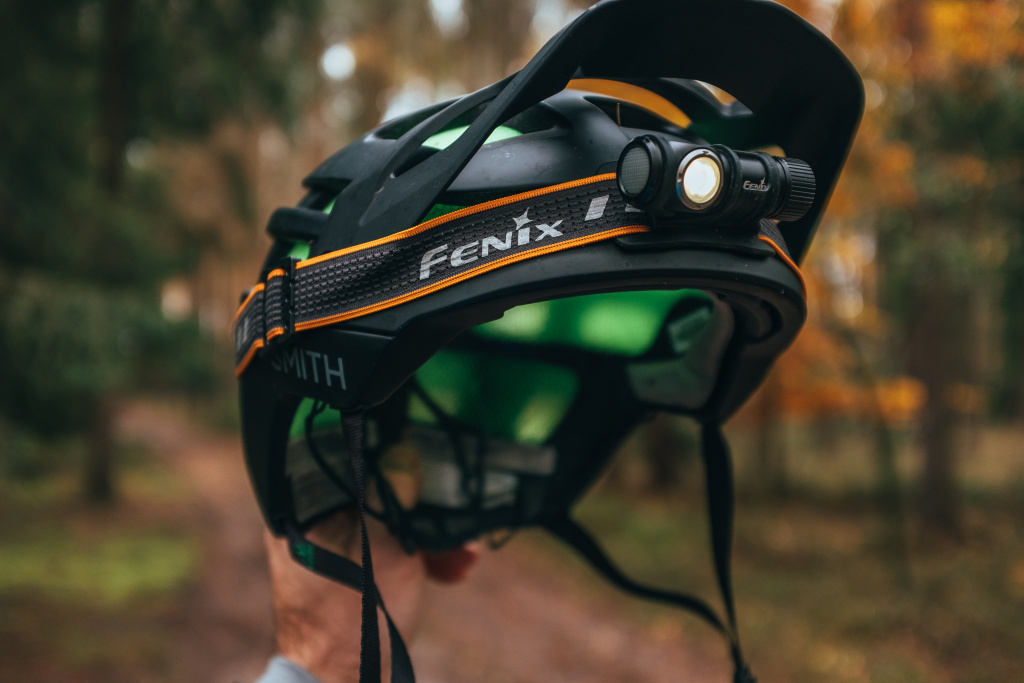 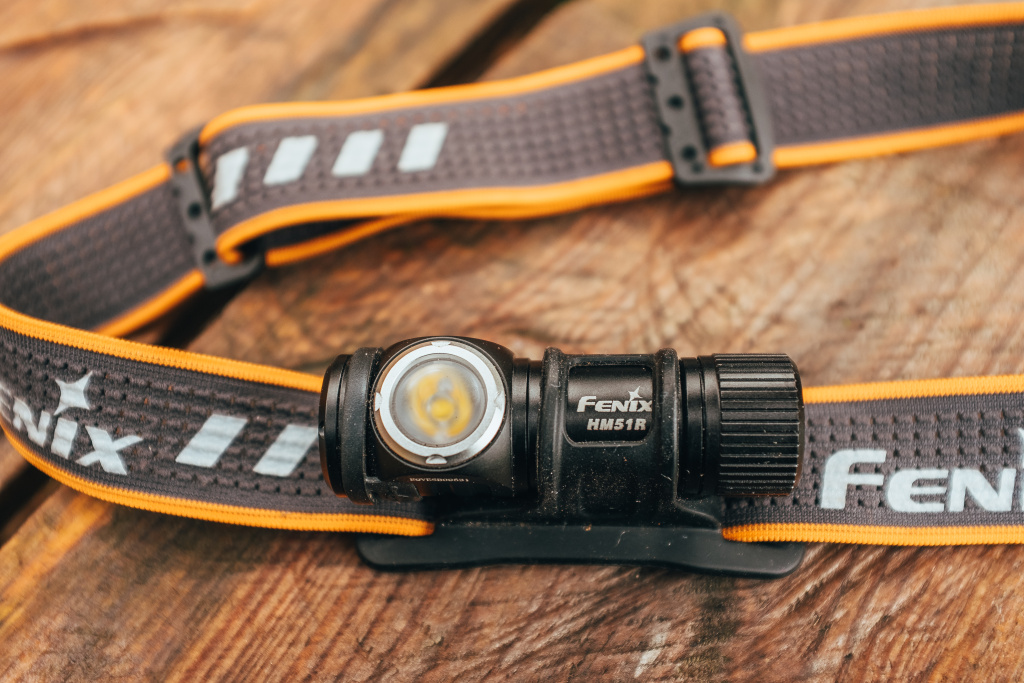 Now for the performance. HM51R Ruby has four neutral white light (4500K) modes and three red lights. Neutral white versus cold better portrays inequalities. This makes the terrain easier to read and doesn’t look like a flat surface. The beam is just wide enough, with no unnecessary overhead. It will safely illuminate the entire width of the road and the moat. The luminosity in each mode is as follows:
White

There’s just one catch. The full output of 500 lumens is limited to 5 minutes. Subsequently, as a result of overheating protection, the headlamp switches to 200 lumens. During those five minutes, the diode’s surroundings really get hot enough that you can barely hold it in your hand, so the fuse is probably in place. After reducing power to 200l, it is possible to switch back to full power, which lasts another 5 minutes, but long-term use of 500 lumens is not very realistic. So the full-power endurance of 500 lumens is 5 minutes in reality, followed by just over an hour at 200 lumens. Or possibly some 20 minutes after single 5-minute intervals. Is that a problem? It will come to this. I have the second highest power, i.e. 150 lumens is usually quite enough to be able to drive safely through the woods even in the dead of night. At the normal bikepacking cruising speed, that is. I don’t really go to the trails at night. At full power, I switch in the downhill or when I need to look around more. In fact, it was while writing this review that I began to dig into my endurance at full power. I hadn’t used it for more than a few dozen seconds in three-quarters of a year, but it came in handy when needed. On a road move, I often make do with 30 lumens. Strange, isn’t it? When it seems that anyone without at least 5,000 lumens of Chinese ecommerce can’t survive on a bike at night. Yes, he can. And he doesn’t have to burn out the retina of everything that crosses his path. The lowest output of 3 lumens and a red light is then an outright tent affair. 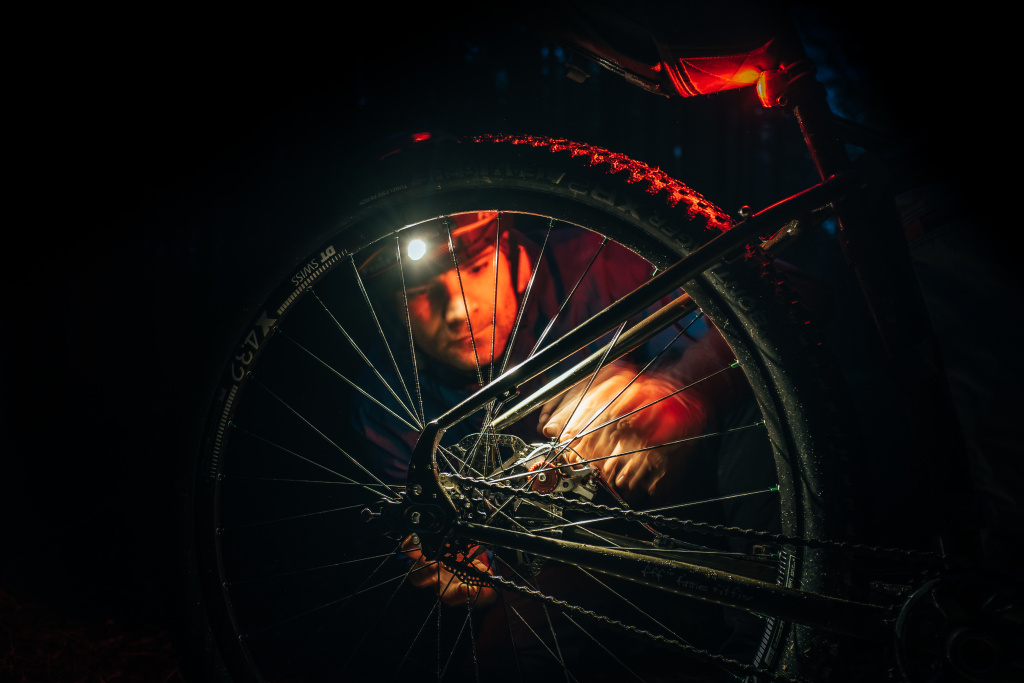 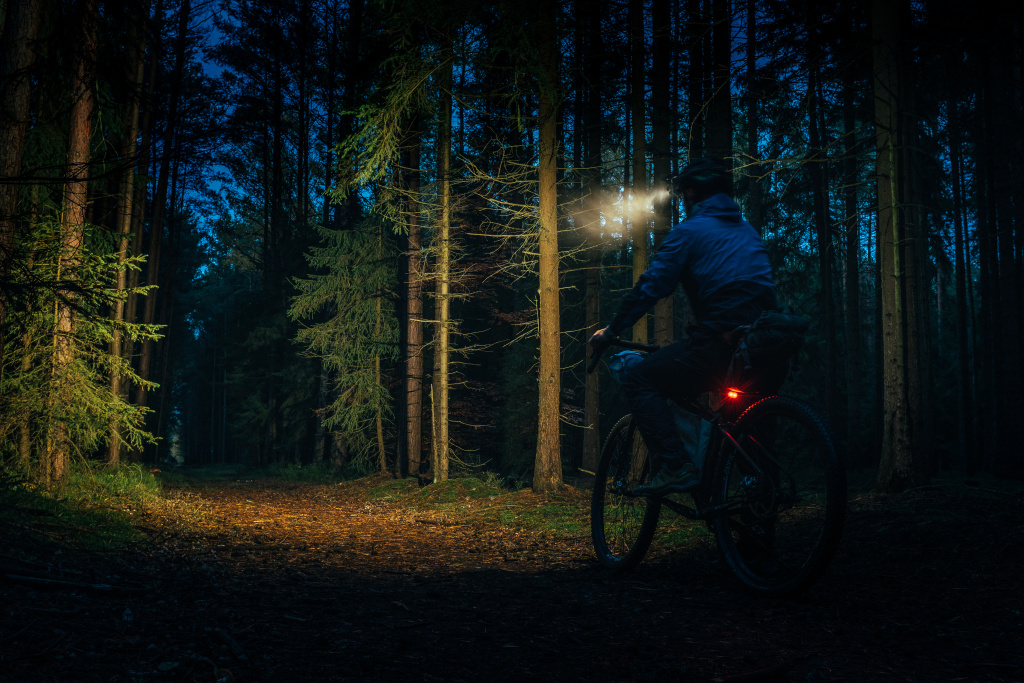 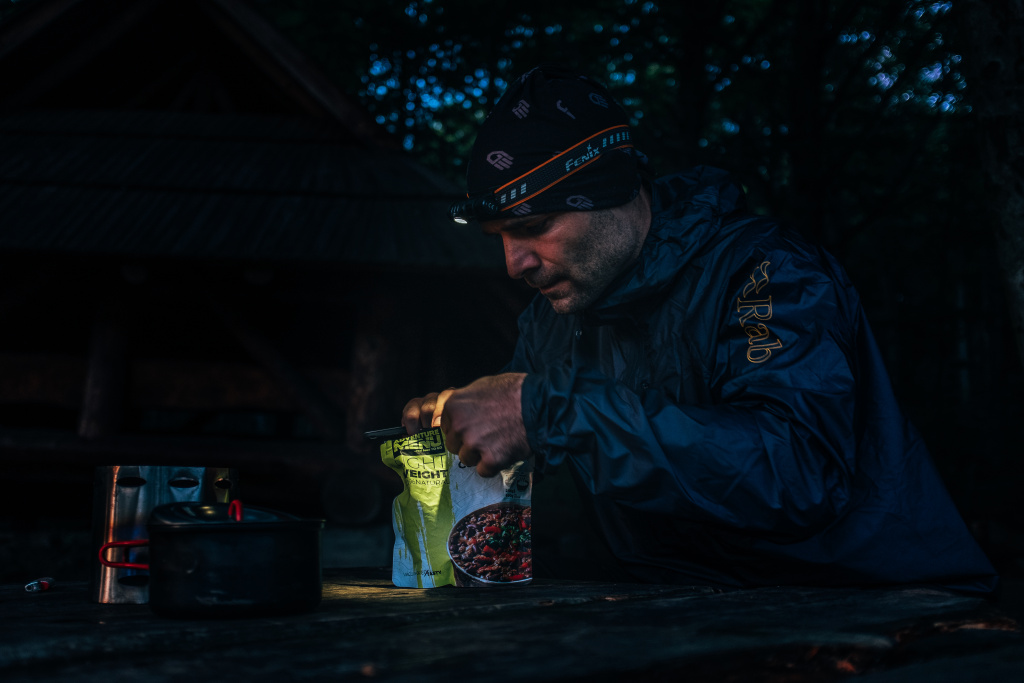 A very important feature for me is constant performance in the chosen mode. What does that mean? Simply, the headlamp glows in a given mode as much as the battery allows and when it’s low enough, it switches down a notch. This system suits me better than a gradual weakening because I have a clearer idea of where I stand with the battery. As opposed to gradually fading, as your eyes slowly adjust to the fading light, you suddenly realize that you can’t actually see much anymore and your headlamp is K.O.. That, by the way, is why two lamps of equal power and battery capacity can have a difference in endurance of several hours. Norma allows it that way . . . 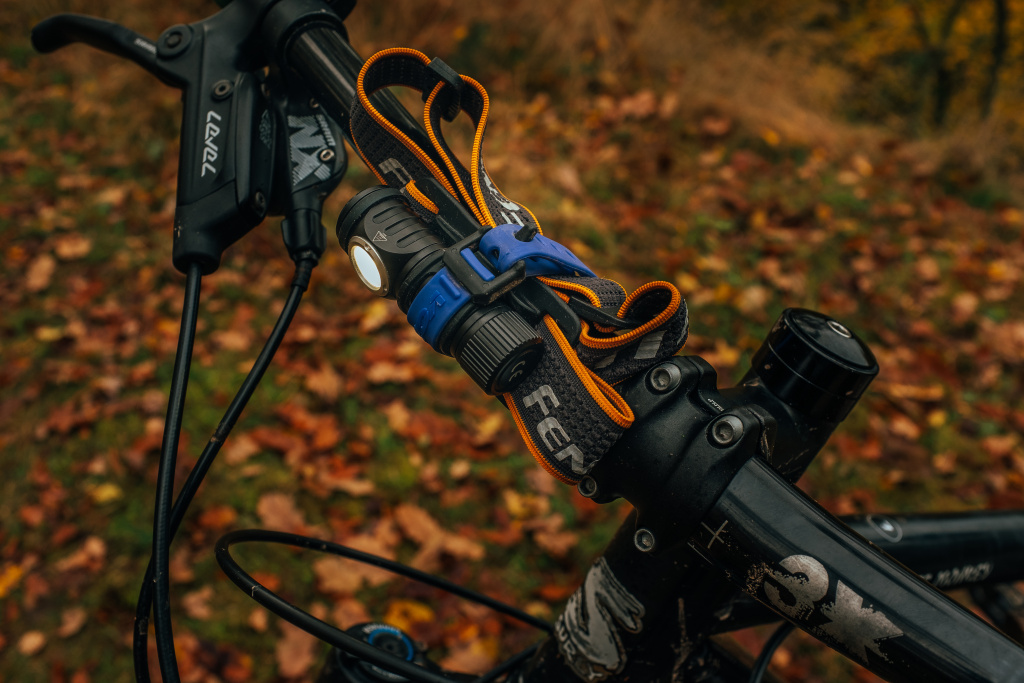 I’ll get back to the light while I’m driving. I don’t often use a little trick to streamline the power of the headlamp. If I don’t absolutely need a head lamp, I put it on the front satchel, using Voile’s strap for the handlebars. As the light gets closer to the ground, the output of 150 lumens is absolutely sufficient. It’s especially noticeable in the rain or fog, when it’s usually with a flashlight on your head by shining a cloud of fog in front of your face, but you can’t see anything further.

Now something to control. A single button on the side of the lantern serves this purpose. A short hold turns on the main white light. A quick double-click lights up red. Subsequently, another squeeze changes the intensity of the light. When disabled, the last selected mode will light up again. There’s an extra battery indicator under the control button. If the lamp is off, you can check the battery with one quick squeeze. Green means more than 85%, green flashes 85-50%, red 50-25%, and red flashes signal less than 25%. Is that squeezing and clicking too much? Not really, two minutes to play and you’re clear. 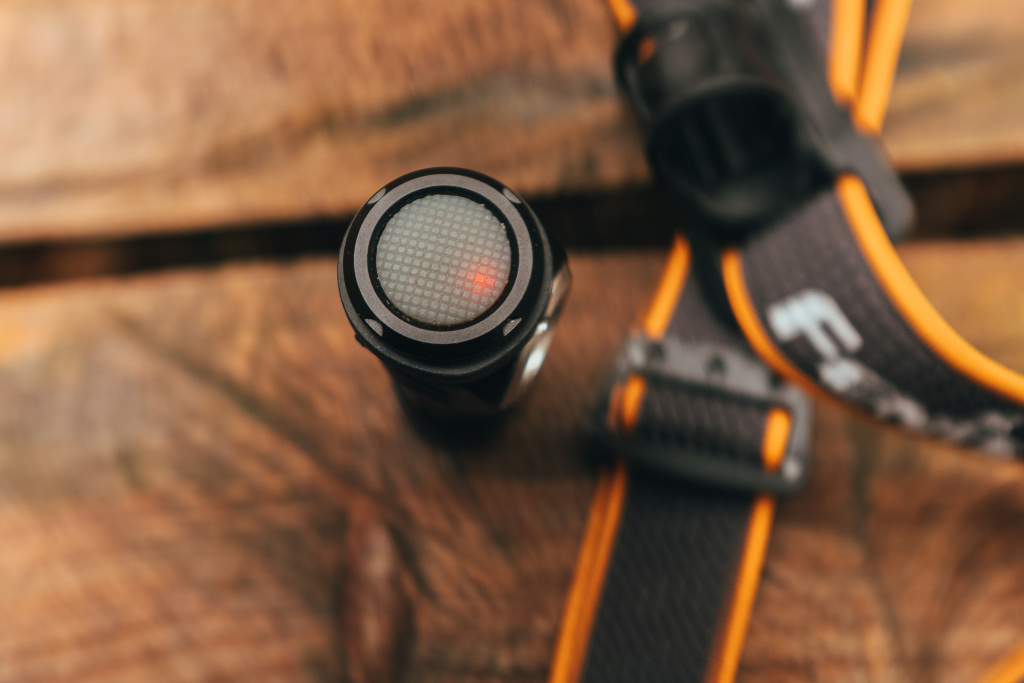 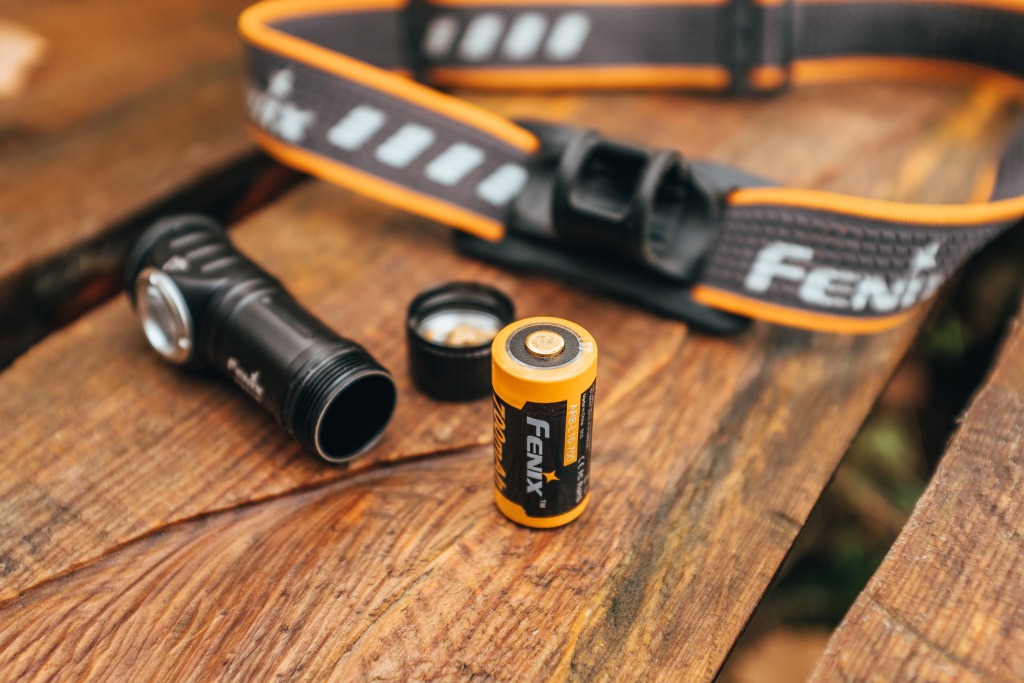 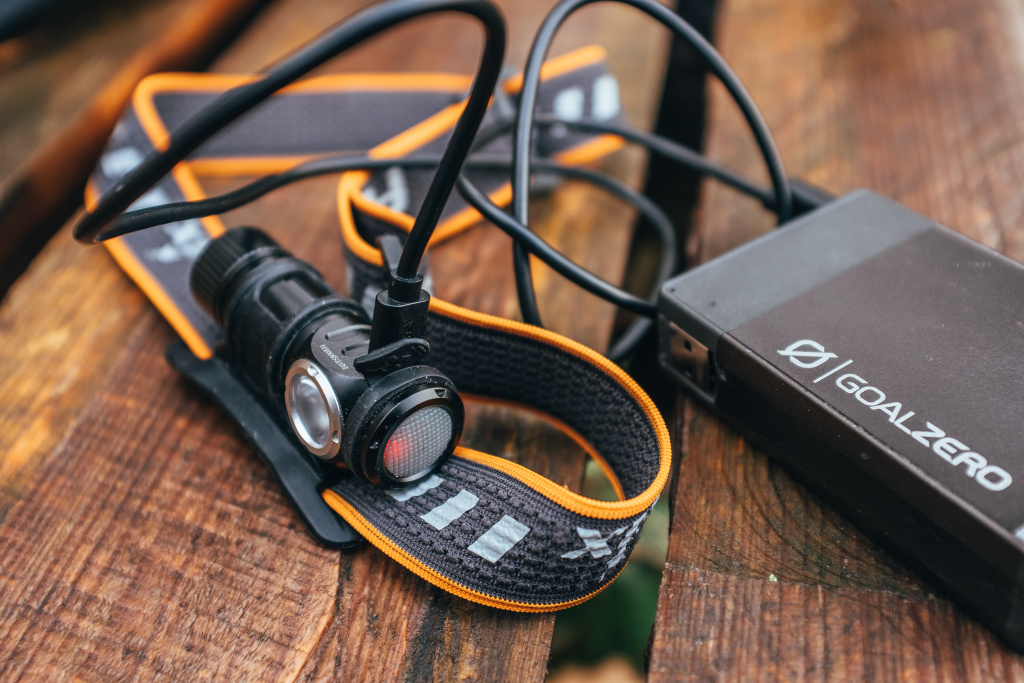 The RCR123A charging Li-on battery, with a capacity of 700mAh, which is included in the pack, brings the headlamp to life. Alternatively, a single “lithium” CR123A can be used. It’s the half-pencil kind. The supplied rechargeable “li-onka” is charged directly in the lamp. There’s a micro USB jack under the main diode. Charging takes about 1.5h and during this only the weakest 3-lumen mode works. You can also buy an original battery with a built-in jack, which is charged outside the lamp via a micro USB. The CR123A one-offs are justified in the winter months. Lithium batteries are not so subject to freezing and usually have a larger capacity of around 1000-1500mAh. I mostly carry the supplied rechargeable battery in the headboard and one spare CR123A for emergencies. Incidentally, there’s a magnet on the battery’s screw cap that makes the lamp itself easy to attach to a metal surface. It’s mostly useless in the woods, but at home I was happy to use it while replacing the water battery under the sink.

Last up is the strap. This is perforated and wide enough to keep the lamp in place even when running. Fortunately, it’s long enough to go over a helmet. The bonus is the reflective elements all around the perimeter. There’s probably nothing more to say. 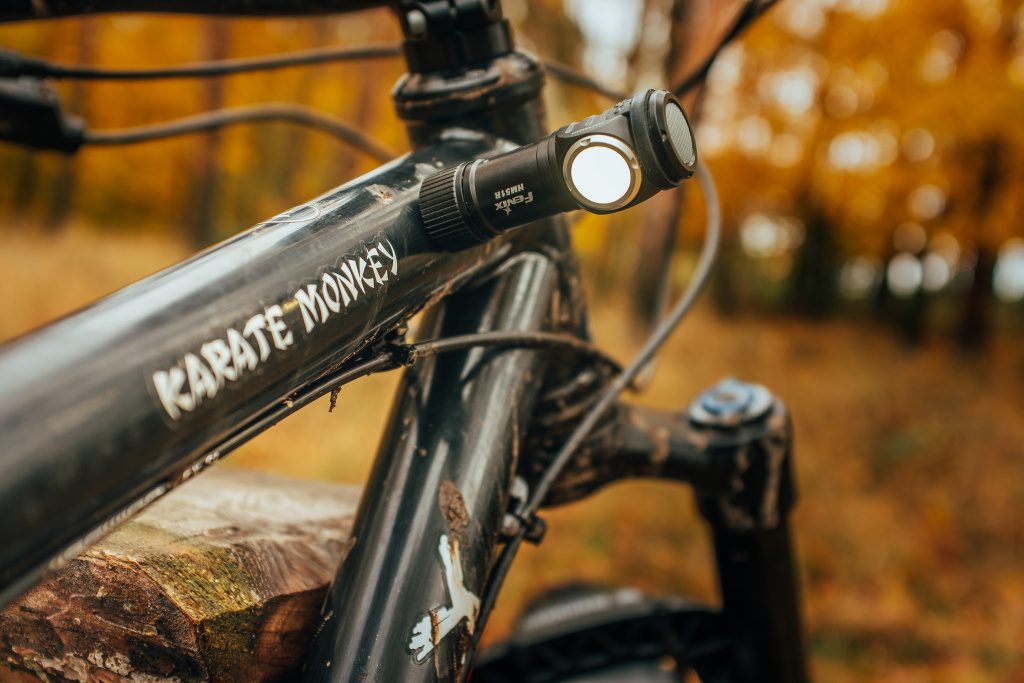 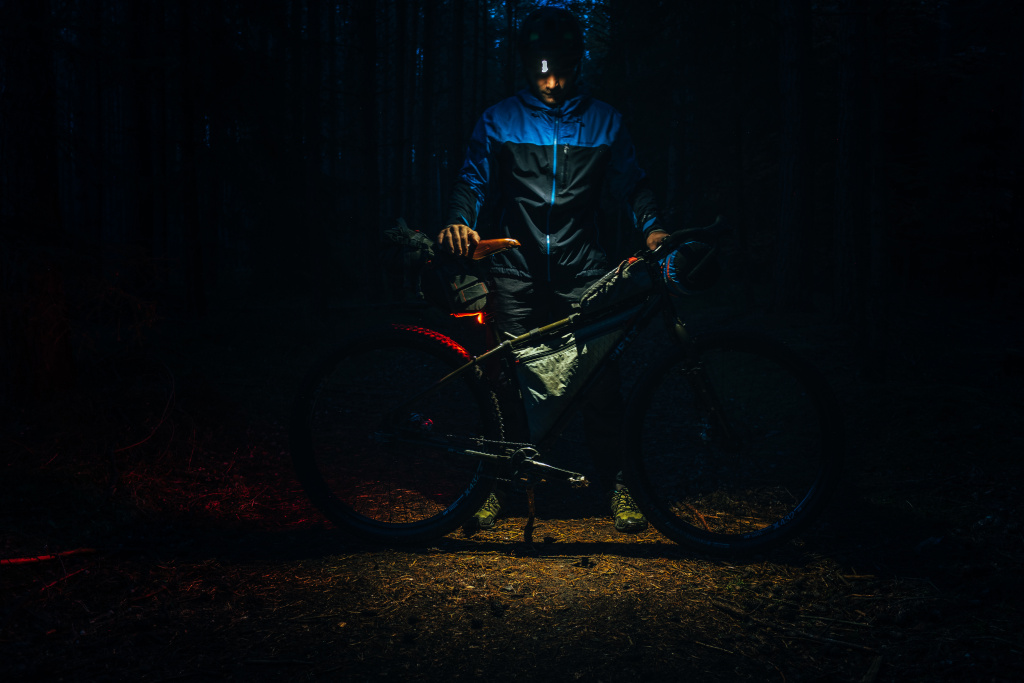 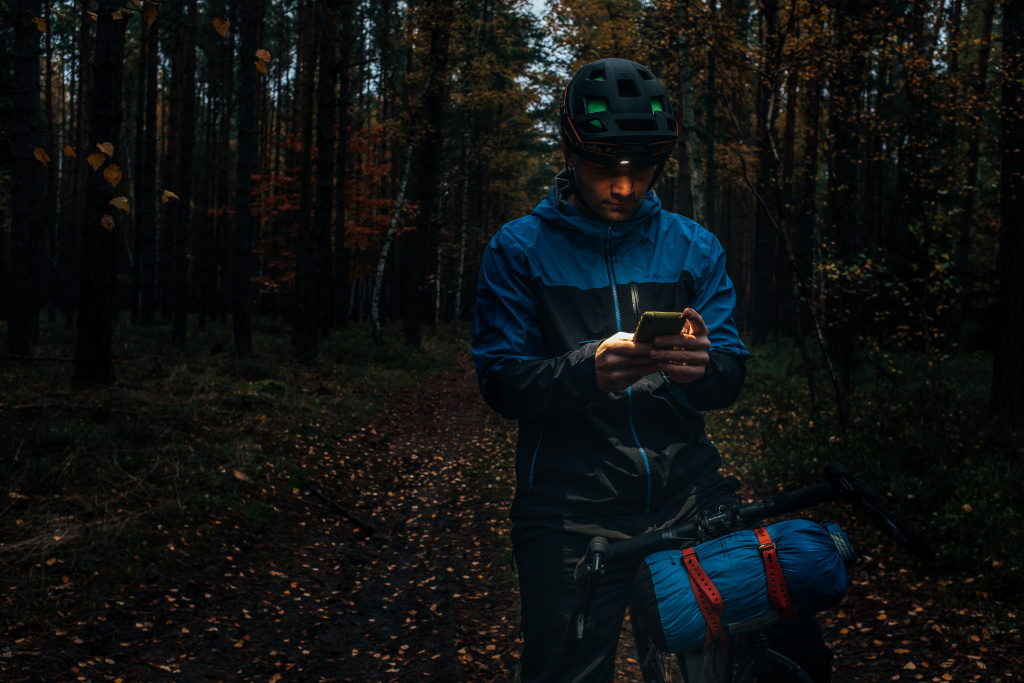 I’d hate to give the impression that HM51R Ruby can replace a powerful cycle lamp. I don’t think so. For regular runs in the dark, I would have gone for more power and stamina. It’s a pretty good headlamp, though, with a solid performance that you can count on if you have an unplanned blackout and need to get to the finish line 2h in the dark. It’s small, light, simple, almost unbreakable, and it shines just enough.
Pros

I found nothing major